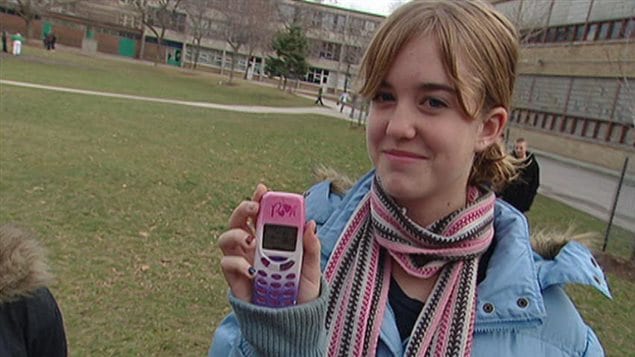 A Toronto Ontario junior high school has instituted a ban on mobile phones in the class and hallways starting today. Most parents and even some students agree with the move.
Photo Credit: CBC

The Earl Grey Public School in Toronto has banned mobile phones from the classroom and the school hallways. The ban goes into effect today.

The 12 and 13 year-old students  at the junior high school (grades 7-8) were told their cellphones would have to left in their lockers today.

School principal  Bill Vatzolas wrote to parents this week saying the school was trying to “minimize distractions in the classroom and reduce the inappropriate uses of the devices during the school day”.

In addition to surfing the net, or texting during class, some teachers were uncomfortable with the fact that students were occasionally filming them.

Dr. James Roberts, a professor at Baylor University in Texas says the school is making a good move, and calls cellphones a distraction in class, that undermines learning.

The author of “Too Much of a Good Thing: Are You Addicted to Your Smartphone?”  is quoted in the Toronto Star news saying ““For the students it’s going to be like trying to detox a drug addict”.

Steve Joordens, Professor of Psychology at University of Toronto,  agrees saying phones can become addictive noting that if the child starts spending more time online than connecting with people in real life or begins to sleep with the cellphone close to them, it could be the signs of addiction.

The principal says students can use their phones during lunch period but with restrictions instituted in September which prohibits texting, taking photos or videos, or signing into social media.

Say yes to devices in class

However the Peel District School Board have adopted a much different policy.

The school board there, which covers schools and over 100,000 students in Mississauga and Brampton encourages students to bring phones and tablets etc into the classroom saying it is a tool to engage in wider learning experience by enabling quick connection to other sources related to the lesson, and communication amongst themselves and the teacher