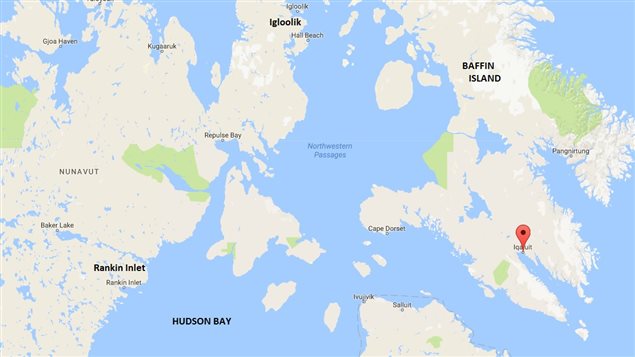 Red balloon indicates Iqaluit, capital of Nunavut Territory in Canada’s eastern Arctic. Their water system is already at capacity and under threat from a growing population and demand, and also due to a changing climate. Surprising to most is that in spite of what seems like a vast number of lakes and rivers, many communities throughout Canada's Arctic are in constant danger of running out of water including Igloolik, where it has already happened, and Rankin Inlet -also under constant threat of running out.
Photo Credit: google maps

Plenty of water? Arctic communities on the verge of running out

Looking at a map of Arctic Canada, it seems there are literally thousands of lakes and rivers, yet many Arctic communities are facing water shortages or threats of shortages to come.

Iqaluit, capital of Nunavut Territory, will be facing that problem in the very near future.

Andrew Medeiros (PhD) is a Northern Research Fellow at the Robarts Centre for Canadian Studies at York University in Toronto.

Like many Arctic communities, Iqaluit is growing, and perhaps slightly faster than the others as it is the capital of the territory. To service the town, it draws its drinking water from a nearby lake. But although relatively deep, like many of the lakes in the Arctic, it has limited volume.  Professor Medeiros notes that Iqaluit is already at it’s capacity in terms of the water in can draw from the nearby lake.

He is co-author on the study called,“Hydrologic monitoring tools for freshwater municipal planning in the Arctic: The case of Iqaluit, Nunavut, Canada” is published today in the journal of Environmental Science and Pollution Research. (available HERE)

He notes that in addition to the increasing population and the subsequent water demand, the climate is changing. Previously supply in summer months came from melting ice and snow  but that is now occurring much earlier and so is not nearly as available to satisfy demand in summer.

He also points while the amount of precipitation in the Iqaluit area has not changed much, the timing and way it arrives has.   Instead of being spread out over a longer season, it tends to arrive now in shorter heavier downpours or snowstorms, such that again, it is less available when needed, and less often occurring in summer.

He says a possible plan to draw additional water from the nearby Apex river will only solve the problem for a couple of years, and by drawing water out of that shallow fast flowing river, it and the ecosystem it supports could be permanently damaged.

But while  only a very few Arctic communities  have  municipal water systems, most of them have water trucked in, and in both cases, because of warming, more pathogens and bugs are moving north. This will mean greater attention to water treatment especially in the multitude of standing water tanks.

Professor Medeiros also says that as water supplies are lessened in lakes and rivers, the flow rate slows allowing the water to become more contaminated by whatever chemicals that may be in the ground (including from melting permafrost)  and from insects.

Although it seems there’s massive amounts of water in the Arctic, he says in terms of what is available to growing communities in a changing climate, it is becoming more and more scarce. He says a clear long term plan is needed including investment in infrastructure.