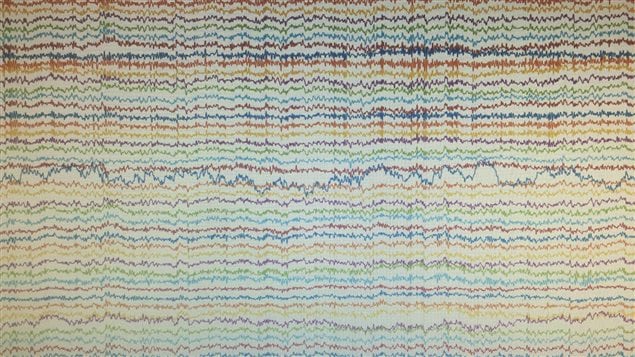 Screen grab of EEG signals registering brain activity. The study pointed to age changing brain activity as a reason for difficulty in concentrating on a particular voice in a crowded room.
Photo Credit: Heny, Western U

You’re at a party, or a gathering or crowd of some sort and there’s a lot of background noise. You’re trying to have a conversation with someone but it’s hard to understand them.

It’s probably your age, and not your hearing

Molly J. Henry (PhD) is a post-doctoral fellow in the Department of Psychology, part of the Brain and Mind Institute at Western University in Ontario and lead author of the study.

You’re trying to listen attentively, but you’re missing out on  parts of the conversation and it’s hard to follow among all the background chatter.

The study points to changes in the brain as you age, and not necessarily hearing loss.

The study was published recently in the online science journal Nature Communications under the title “Ageing affects the balance of neural entrainment and top-down neural modulation in the listening brain”.  (open source HERE)

Henry says that the older brain has more difficulty in picking out or “synching-up” with the specific speech rhythms of a person being listened to, and less of an ability to filter out the unwanted speech patterns in the background.

The test involved both young and older subjects with good hearing, listening to a stripped down sound created with variations to simulate variations in a speech pattern. In one case they were given the task of noting the brief silences thereby requiring them to listen very carefully. Another aspect involved listening again but with no task, and trying to basically ignore the sound, as if to filter it out.

Using electroencephalography (EEG) the researchers then measured the reactions. What they found is that older subjects had difficulty being able to sync their brains with the sound pattern and it’s not to hearing issues.

Henry says she would now like to move the testing into more of an actual cocktail party situation, and also determine the different degrees to which brain function and hearing loss play a role in difficulty of focussing on particular speech and ignoring other background sounds.

She says this work is important as diminishing hearing can be associated with early onset dementia. As people lose their hearing they might begin to isolate themselves from social interaction which has a tendency to exacerbate the onset of dementia.