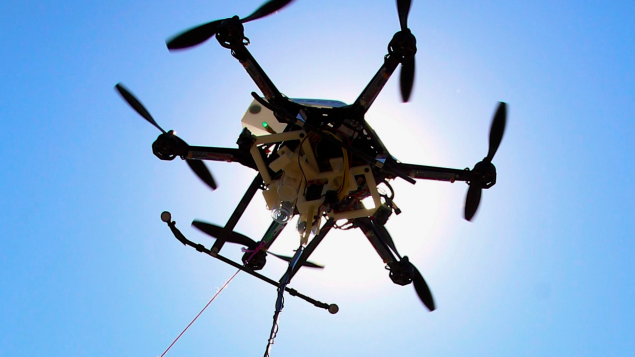 Is hunting with drones ethical? Canada’s Yukon territory says ‘no’

The issue of drones and hunting has become an increasingly hot-button issue in many areas of rural Canada, but at least one of Canada’s northern territories has nixed the practice once and for all with new regulations that came into effect this August.

“What we’re really trying to tell people is: If you’re out hunting, don’t take your drone, don’t use your drone, don’t even have it,” Ryan Hennings, Manager of Enforcement and Compliance at the Conservation Officer Services branch of the Yukon government, told Eye on the Arctic in a phone interview from Whitehorse.

Wildlife spotting with aircraft is already illegal in Yukon.

But the increasing numbers of queries regarding drone use and hunting prompted the territory to make the regulations more specific and clarify that aircraft includes drones, also known as unmanned aerial vehicles (UAV), too.

“It’s an ethical question and a fair chase question,” Hennings said, saying drones, and other aircraft, give hunters an unfair advantage over the wildlife they’re tracking.

Fines for violating the legislation run up to $50,000 for individual hunters, and up to $100,000 for people hunting for commercial reasons, for example, an outfitter.

In Canada, southern provinces like Alberta, British Columbia and Saskatchewan have also banned drones for spotting wildlife.  But controversy over the practice continues to rage in other jurisdictions like Ontario and Nova Scotia.

For more from Eye on the Arctic‘s conversation with Ryan Hennings, listen here:

And in Canada’s other northern territories?

The Department of Environment in Canada’s eastern Arctic territory of Nunavut says there’s no specific regulations preventing the use of drones in their jurisdiction, but that there’s been no reports to date of drones being used to harvest wildlife in the territory.

However, the department continues to monitor the situation and would be prepared to introduce regulations if hunting with drones becomes an issue in future, a spokesperson said.

In the neighbouring Northwest Territories (NWT), authorities say issues around drones and wildlife will need to be carefully considered as the technology becomes increasing popular.

Nothing in NWT’s Wildlife Act or regulations currently prohibits drone use while hunting.

However, the territory’s Wildlife Act Working Group and Wildlife Act Advisory Group have considered the issue and believe the need, or not, to have restrictions around drone use should be explored further.

The government will be conducting consultations on Phase 2 of the Wildlife Act this winter and will examine the issue of drone use in more detail at that time.

However, placing such a restriction on an Indigenous person in the territory could be an infringement on their right to harvest, so will not be discussed, said a spokesperson for the territory’s department of Environment and Natural Resources.

Meanwhile, Yukon authorities hope their new regulations send a strong message to hunters that drone use while harvesting animals in the territory won’t be tolerated.

“If you’re not hunting, my all means, go ahead and enjoy your drone for whatever recreational or commercial purposes you want while following Transport Canada rules and regulations,” Hennings said.

“But if you’re out hunting? Don’t be in possession of one, and better yet, don’t even take it with you.”

Canada: UAVs to be banned in the Arctic and Antarctic, The Independent Barents Observer

Iceland:  Feature Interview – Hunting culture under stress in Arctic, Eye on the Arctic