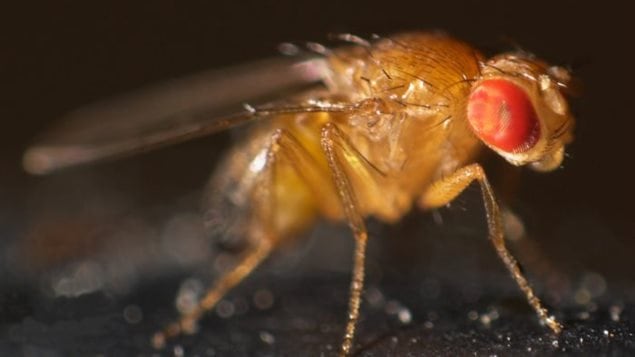 A study of fruit flies and dopamine is related to human response to social distance between individuals, and may lead to helping to understand such disorders as spectrum autism or schizophrenia.

It seems that may be a strange combination, but a recent study has shown there is a connection among the three.

Anne Simon (PhD) is a professor in the Department of Biology at Western University in London Ontario and supervisor of the research.

We have our own “personal space”, which might vary somewhat among individuals and cultures, but it’s the social space immediately around us and if anyone comes within that space, it can make us uncomfortable unless they’re invited.

It seems it’s not just a human thing.

Simon’s study showed that insects, in this case fruit flies, also have a personal space and that dopamine plays a role in determining what that distance is.

The study was recently published in the science journal the Royal Society- Biology Letters under the title ,”Modulation of social space by dopamine in Drosophila melanogaster, but no effect on the avoidance of the Drosophila stress odorant”. (abstract here)

Dopamine is often thought of as the chemical the brain releases in relation to pleasure or gratification. Simon points out that we’re learning more about it and its function is more of a “facilitator” to increase or decrease the neuron response intensity of other chemicals in relation to a stimulus caused by any kind of excitement.

Because dopamine plays an important role in many aspects of brain response, Simon felt that it may also play a role is such a basic response as determining social distance, or personal distance

Using the flies in small containers they varied the dopamine neurotransmitter amount.

In their normal state the flies tended to stay about one to two body lengths apart.

While the study involved these tiny insects, Simon believes this research and further studies could  have implications in better understanding people within the autism spectrum or with schizophrenia, for example.

She says, “Ultimately, this research could lead us to understand a little better why some people are averse to social contact. It might also help us understand why some people who clearly want to interact don’t interpret some social cues the same way others might”.

But she notes before one can confirm that the same processes occur in humans further studies  in mammal models need to be performed.

She says she will now be studying which particular brain receptors  are involved in the reception of dopamine and where in the various parts of the brain they are located.