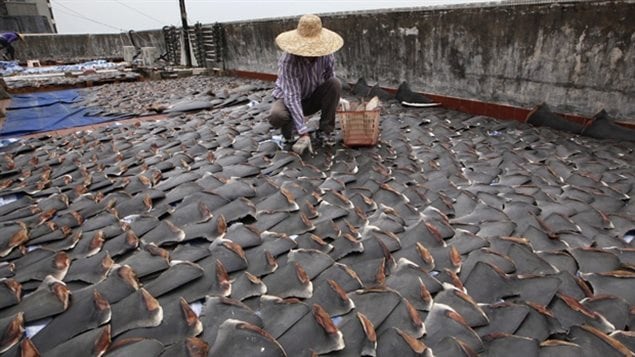 2013: A worker collects pieces of shark fins dried on the rooftop of a factory building in Hong Kong A new study found twelve species for sale that are banned from international trade under CITES, including whale shark fins.
Photo Credit: (Kin Cheung/Associated Press

A study of shark fins and ray gill plates for sale in markets has shown that a majority are from endangered species.

The University of Guelph used its unique DNA library to identify exactly the various species.

Dirk Steinke is an adjunct professor in the Department of Integrated Biology at Guelph University in Ontario, and associate-director for research coordination at the Centre for Biodiversity Genomics.

For this study, researchers in collaboration with the Guy Harvey Research Institute and Save Our Seas Shark Research Centre at Nova Southeastern University in Florida collected 129 market samples in Canada, China and Sri Lanka representing 20 shark and ray species.

They found that 71 per cent of dried fins and gills collected from markets and stores came from species listed as at-risk.

They discovered that 12 of those species, including whale sharks, are listed as protected and illegal to trade under the Convention on International Trade in Endangered Species (CITES). This means they are banned from international trade, and as such should not be for sale anywhere.

Professor Steinke says the Guelph University DNA barcode data base gives agencies a new tool for enforcement of conservation rules as it ensures identification of species using DNA.  “It’s an area that until now has been hard to enforce because shark fins are dried and processed before they are sold, making it difficult to identify the species”.

Shark finning, or removing fins from live sharks, is illegal in Canada. Importing shark fins for sale is also illegal for species at-risk.

Professor Steinke points out that Canada is one of the world’s largest importers of shark fins outside of Asia itself.