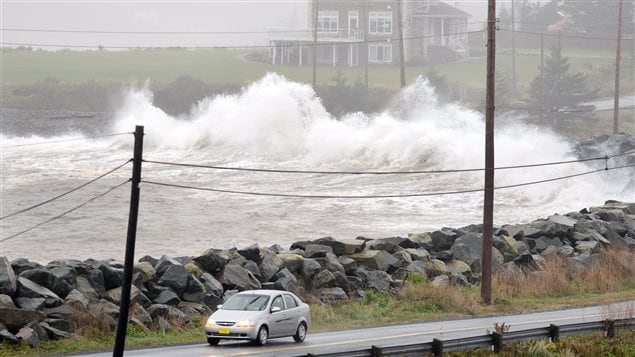 Huge waves from storm surge hit the shore in Cow Bay, N.S. near Halifax on Tuesday, Oct. 30, 2012. With sea rise and storm surges, areas of the Nova Scotia coast will be inundated, and the province might become an island if the isthmus is flooded.
Photo Credit: Canadian Press- Tim Vaughn

Canada’s east coast province of Nova Scotia is connected to the continent by a large isthmus, but it’s low lying and easily flooded.

The idea that Nova Scotia could be cut off by water is a serious concern that has been raised as far back as 1869 when a British naval lieutenant said high tides could flood transportation links in the Chignecto isthmus between Nova Scotia and its neighbour New Brunswick and therefore the rest of Canada.

Now with climate change, the mayor of the city of Amherst which is near the narrowest section of the isthmus, is expressing concern. He says without major infrastructure improvements, Nova Scotia could become an island within two or three decades.

Actually the area is lowland –the Tantramar marshes- that was reclaimed for farming and protected by dikes built by the first settlers in the area in the late 1600’s. Those dikes kept the region from flooding by the tides and storm surges.

With global warming resulting in sea level rise, along with high tides and more violent storms, there are serious concerns that the ageing dikes in place will be breached and vast areas flooded.

Tim Webster (PhD) a research scientist with the Applied Geomatics Research Group at Nova Scotia Community College in Middleton, and expert in the subject, says a very possible storm surge of 2 metres occurring at a high tide could top the dikes and cut transport routes. He noted that it would take a sea rising 12 metres to cross the isthmus and actually create an island. That he says is unlikely for many decades to come.

The mayor of Amherst N.S, and co-signed by the mayor of Sackville N.B. and the warden of Cumberland County, has written to the ministers of the two provinces responsible for infrastructure and to the federal government requesting an early meeting to discuss the situation.

Improving and raising the dikes would cost millions of dollars, but a breach or flooding that would cut off the major road and rail links would result in losses of trade of about $50 million per day, according to a 2016 Natural Resources Canada study.

Mayor Kogon of Amherst says the work should be undertaken within the next few years, but has yet to hear back, adding that it’s not a question of if the dikes will be overcome, but when.