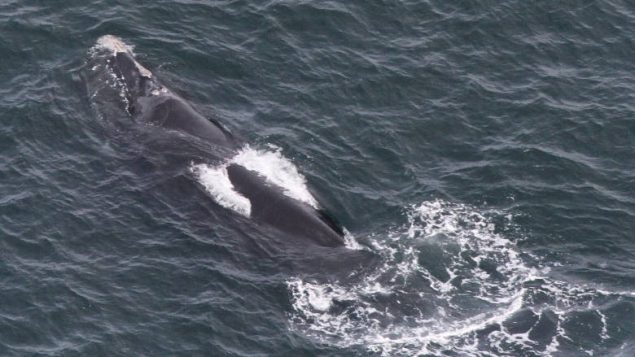 Two right whales were spotted in the Gulf of St Lawrence. This is weeks ahead of traditional arrival. Photo: Center for Coastal Studies/NOAA permit #19315)

Last year there was a record 18 North Atlantic right whale deaths in the waters of eastern North America. Most of them were in the Gulf of St Lawrence and were attributed in large part to entanglement with fishing gear.

With no calves spotted this year, the future of the species is extremely worrisome, and all efforts are being made to avoid further deaths to the already greatly endangered species. 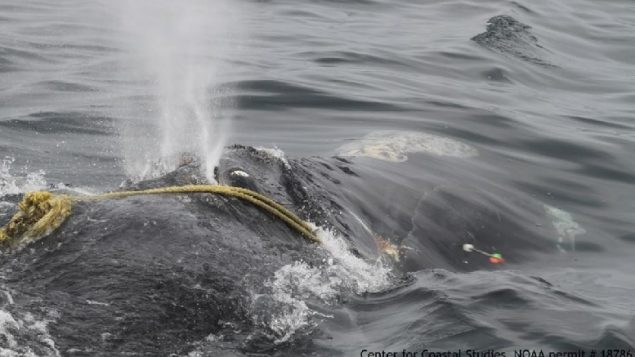 Earlier this year, a right whale was spotted tangled in fishing gear off Cape Cod. The female whale is seen taking a breath on the surface just as a cutting arrow is about to hit the ropes. The ropes were nicked by the arrow but it is not certain if that was enough to eventually break the ropes. Photo Courtesy Center for Coastal Studies.

When two right whales were spotted in the Gulf off the coast of New Brunswick, Canada’s Fisheries Minister, Dominic Leblanc announced an immediate closure of several fishing zones.

Moira Brown of the Canadian Whale Institute in Campobello, New Brunswick said the plankton the whales feed on has been showing up earlier in the season in the past few years, hence the whales are appearing in the Gulf and Bay of Fundy weeks ahead of their typical arrival in mid to late July and early August. She notes no whales have so far been seen in the Bay of Fundy.

Gear must be out by Wednesday afternoon.

The fishery closure order was originally to have all fishing gear out of the water by yesterday afternoon, but the order was delayed 24 hours due to strong winds. 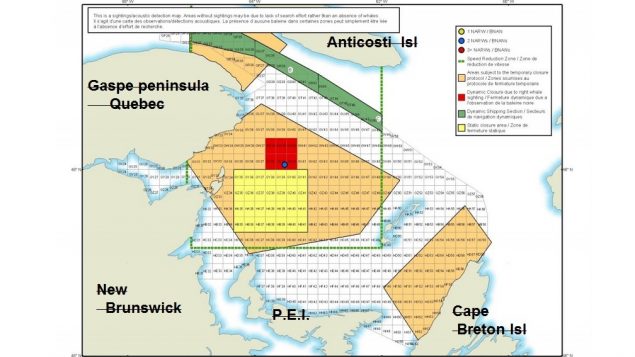 This order to stop activity includes fishing for  snow crab, toad crab, rock crab, lobster and whelk. The closures will also apply to fixed-gear winter flounder and Atlantic halibut, except where gear is not left unattended.

In an effort to reduce the hazard from entanglements from crab fishing gear, the season was started early this year in hopes of ending the season before whales began to appear.

The closure lasts for 15 days and the crab and other traps will be allowed back only when two surveillance flights find no whales in the area.

The season will also end two weeks earlier this year, by June 30.

As some of the slow moving whales killed last year were also due to ship strikes, a speed limit for shipping introduced last season has been re-introduced. Ships 20 metres or longer will have to slow to 10 knots in the Gulf. Last year almost 550 ships broke the speed limit, with 14 fined the maximum of $6,000. 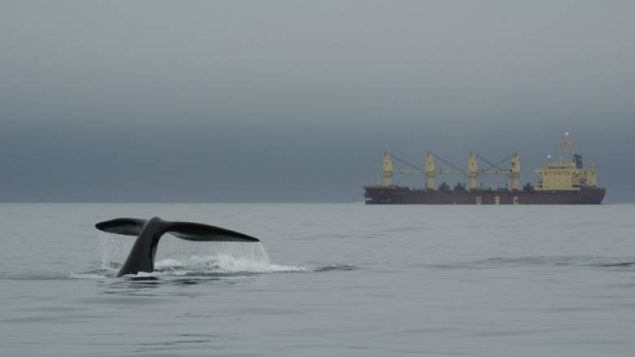 A right whale near a large ship in the Bay of Fundy, Last year several whale deaths were attributed to being hit by faster moving ships, resulting in speed limits being imposed.
Photo: Kara Mahoney Robinson/New England Aquarium

Lobster fishermen will also have to observe new rules including a limit on  on the amount of  rope floating on the surface, reporting any lost gear, reporting any interactions with marine life including bycatch and any sightings of marine mammal entanglement as well as any sighting of free swimming whales.