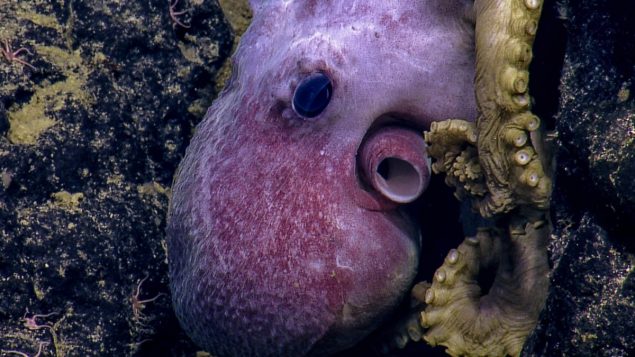 Canadian scientists who have discovered new ancient and fragile coral forests and potentially new species during an expedition to explore deep-sea mountains off the coast of British Columbia, say they want these “spectacular” sea wonders permanently protected.

An expedition team comprised of four groups – the Haida Nation, Fisheries and Oceans Canada, Oceana Canada, and Ocean Networks Canada – set sail earlier this month to explore seamounts (underwater mountains) near the islands of Haida Gwaii in the northeast Pacific Ocean off the coast of British Columbia.

“After what we saw in this expedition, there is just no question that the level of biodiversity, the abundance, but also these really fragile, sensitive habitats – the corals and sponges – they just need to be protected,” Rangeley said. “We can’t have fishing gear going through these areas.”

(click to listen to the full interview with Robert Rangeley)

Currently only the area around SGaan Kinghlas-Bowie seamount is permanently protected, Rangeley said. Oceana Canada wants the same level of protection extended to all the other seamounts within Canada’s Exclusive Economic Zone (EEZ) extending into the ocean about 250 miles off the coast of British Columbia, Rangeley said.

The mapping and increased understanding of seamount systems off British Columbia’s coast is highly significant, he said.

These ecosystems are important for maintaining biodiversity in the ocean and contribute greatly to its health, Rangeley said.

“It was amazing, forests of corals and sponges, and these things are centuries old and all the fish and other species that were associated with them,” Rangeley said. “It was amazing.”

Scientists aboard Nautilus were able to observe previously unexplored areas of the ocean floor thanks to high resolution video feeds from the two ROVs that mapped and explored seamounts thousands of metres below the ocean’s surface.

“Just imagine going down to the base of a volcanic mountain and then climbing it with these high resolution cameras, these manipulated arms that we could sample and so on,” Rangeley said. “Sometimes we descended onto these lava fields that were just totally colonized with red tree coral. It was like going into a forest… with a tremendous amount of biodiversity and abundance living amongst those corals.”

Rangeley said it took a partnership between the four groups to pull of the expedition.

“Each partner had incredible deep-sea experts on board and each person shared their knowledge of marine life along with other experts on shore who we connected with through online platforms,” said Rangeley. “The data hasn’t been formally analyzed yet, but it is already clear that the expedition produced important and fascinating results.”

In addition to doing the scientific work, the onboard scientists and educators provided live commentary about the beautiful imagery and marine life on seamounts to thousands of online viewers, Rangeley said.

Photos and videos from the expedition are available at Oceana.ca/Seamounts.