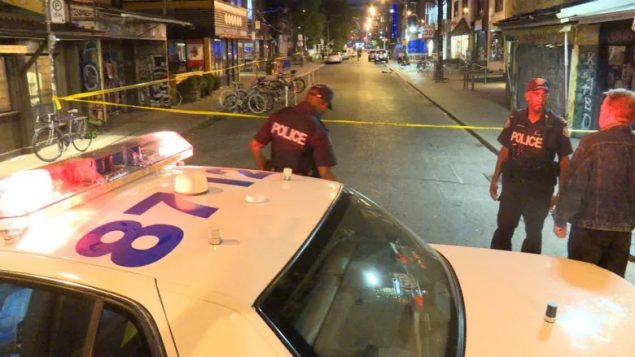 A substantial rise in shootings in Toronto, often related to bars or night clubs, has led to a request to revoke their liquor licence. (Tony Smtyh-CBC)

Toronto, Canada’s largest and most culturally diverse city, has seen a very significant increase in gang violence and shootings in the past couple of years.

Although not always, these incidents and tragedies have often occurred in or near establishments where alcohol is served.

Now a city councillor wants to have the liquor licences revoked from bars, night clubs, or restaurants where violence has repeatedly occurred or where guns have been found in or near the establishment.

Councillor Mike Colle presented a motion to Toronto city council to make an official request to the provincial agency which regulates liquor licences, the Alcohol and Gaming Commission of Ontario (AGCO). He wants them revoke alcohol sales privileges from  bars or restaurants that have “been the scene of gun violence, or where patrons have been in the possession of handguns, or where the police have found handguns on the premises of the licensed establishment”.

He decided to take action after another incident earlier this month in which 15 shots were fired at a bar where three other shooting incidents have occurred. The latest incident resulted in one serious injury and damage to buildings and cars nearby.

The Scourge of Gun Violence cannot continued to be ignored. I’m trying to focus on one part of it by taking away liquor licenses from bars associated with guns. #TOpoli

When other councillors expressed the possibily of penalising innocent establishment owners where such violence occurs, Colle said he was seeking action only against establishments with repeated incidents.

“A bar owner should at least have an awareness of what’s going on at their premises”, he said and noting he’s not interested in talk about banning guns but added, “These bars which condone, essentially tolerate gun behaviour – in and around their premises – it’s basically just five per cent of the bars, but these outliers run the police ragged, you can’t close them down”.

The motion was passed by Toronto city council yesterday by a vote of 19-4. The city will now pass its request on to the Alcohol and Gaming Commission of Ontario to act on the request.