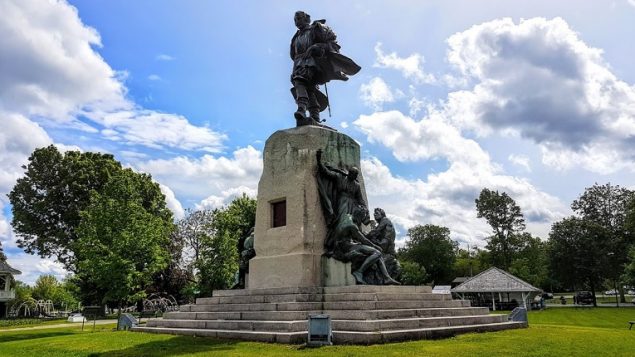 The 17th century French explorer Samuel de Champlain has long been lauded in Canadian history books as opening up Canada through his travels into the then unexplored interior of the country.

In the quiet and picturesque city of Orillia, Ontario, a statue of the French explorer commissioned in 1915 to mark the 300th anniversary of the arrival of Europeans in Ontario has now joined many other statues to Canadian historical figures which have become controversial.

Indeed an original plaque notes the monument was “erected to commemorate the advent into Ontario of the white race”.
The almost 4-metre tall bronze statue shows the French explorer in full court dress atop a base flanked on one side by two Indigenous people looking up to a Jesuit priest, and on the other, two more looking up at a fur trader.

Although located in Orillia, the statue and land around it are controlled by Parks Canada which had it removed for repair and the base and steps removed as they were crumbling.  The original intent was to then reconstruct it. 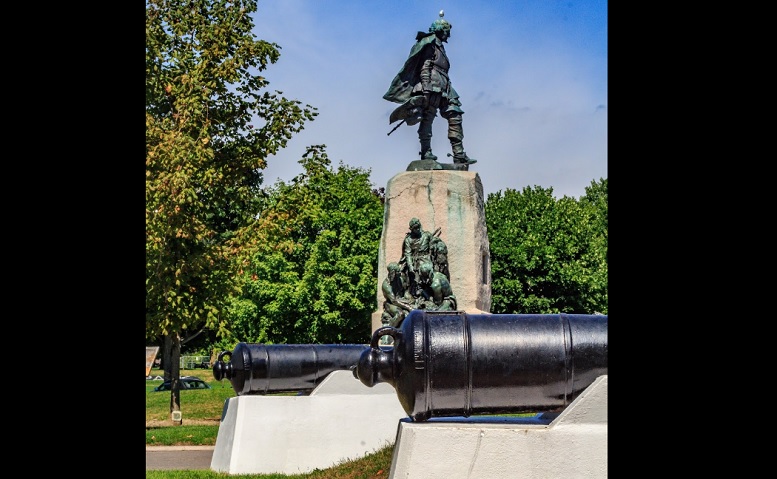 Unveiled in 1925, the bronze statues were removed and the crumbling monument was taken down in 2017 with the intention to rebuild anew. Parks Canada decided to hold off as Champlain became controversial in light of Indigenous feelings toward the historical context and federal government expressions of reconciliation with Indigenous peoples (Google streetview)

That was delayed when objections were raised saying the monument was offensive and racist towards Indigenous peoples.

About 60 people gathered at the former site on July 1, Canada Day, to express their opposition to the statue.Quoted in Simcoe.com, a member of the Chippewas of Rama First Nation, Kathy Brooks, said Champlain and the monument to him, represent “racism, oppression, genocide and colonialism” and shows the Indigenous people cowering.

A local historian disagrees saying that interpretation is “misunderstood”.

After deliberation, Orillia city council has voted to ask Parks Canada to return the statues and rebuild the monument but with an “expanded interpretation”  as an opportunity to educate people not only about the good, but also the bad.  Such an interpretation would reflect historical context and better portray Indigenous people.

A final decision on whether the statue will be returned and if so , in what form, remains with Parks Canada. In a statement reported by Global News, Parks Canada stated it is “committed to working respectfully with Indigenous Peoples and honouring their contributions to Canada’s protected places”.

There are several bronze monuments to Samuel de Champlain in Canada, notably one in Ottawa where the sculptor had added a handle to Champlain’s early-type of astrolabe navigational tool (which they didn’t have) and also has it upside down.

There are several monument’s to Champlain in Canada, including this one in Ottawa at Nepean Point. Unfortunately the sculptor didn’t know much about early Astrolabe’s, having added a non-existent handle, and with the explorer holding it incorrectly.( Radio-Canada, Martin Vanasse)

(the story has been modified on July 19,2019 to indicate that it was Orillia city council that has asked Parks Canada to rebuild the monument. A working group called the Champlain Monument Working Group had not yet submitted their recommendation at the time of writing)

2 comments on “Another statue controversy in Canada: Samuel de Champlain”