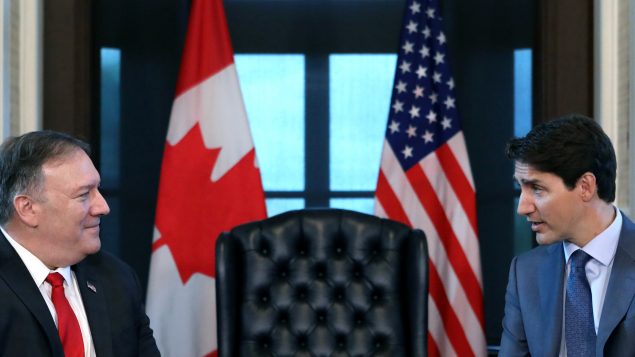 Prime Minister Justin Trudeau and U.S. Secretary of State Mike Pompeo discussed Canada-U.S. cooperation in the Arctic during Thursday’s visit by the top American diplomat to Ottawa, amid signs that Washington is growing increasingly concerned by geopolitical challenges posed by Russia and China in the North.

Trudeau reaffirmed “Canada’s longstanding position regarding Canadian sovereignty over the Northwest Passage,” according to a brief readout of the meeting with Pompeo released by the Prime Minister’s Office.

Later in the day, speaking at a press conference in Ottawa, Pompeo said that during the meeting with Trudeau he also stressed the importance of Canadian efforts in defence of the Arctic.

“Your expansive Arctic territory is the backdoor to the continent, and the Arctic’s strategic importance, including its vast resources and shipping lanes, are of increasing interest to the entire world, especially to China and to Russia,” Pompeo said.  “The Trump administration is eager to work with Canada to increase our shared defence in the region.”

Trudeau’s reference to Canadian sovereignty over the Northwest Passage, a body of mostly ice-bound water that snakes through the Canadian Arctic Archipelago, connecting the Atlantic and Pacific oceans, reflected Ottawa’s concerns over recent statements made by Pompeo and other U.S. officials.

Navy Secretary Richard Spencer told reporters in January and again in May Washington is exploring the possibility of sending a ship through the Northwest Passage this summer as part of a freedom of navigation operation (FONOP) to assert its right of passage through what it considers to be international waters. 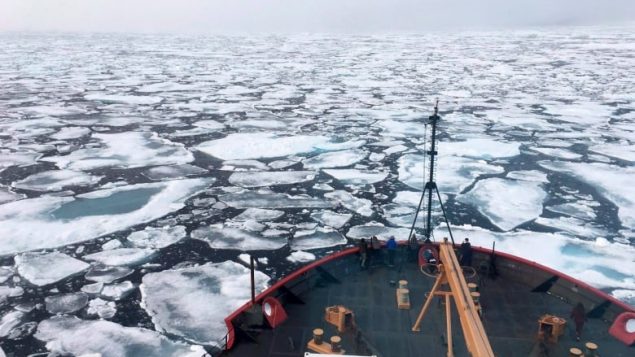 This summer 2018 photo shows the USCG Icebreaker Healy on a research cruise in the Chukchi Sea of the Arctic Ocean. (Devin Powell/NOAA/The Associated Press)

Spencer’s message was reinforced by Pompeo who told a meeting of foreign ministers of the Arctic Council in northern Finland on May 6, that the U.S. doesn’t recognize Canada’s “illegitimate” claim to the Northwest Passage or Russia’s sovereignty over the Northern Sea Route along its Arctic coastline.

Both Canada and Russia claim these passages are internal waters and argue that the U.N. Convention on the Law of the Sea (UNCLOS) allows coastal states to manage ice-covered waters.

A U.S. FONOP operation in the Northwest Passage would also violate the 1988 Arctic Cooperation Agreement, according to which the U.S. government seeks Canada’s consent for its ice breakers to navigate the waterways, while Canada engages to always grant access to U.S. vessels.

Pompeo’s comments also came a day after U.S. President Donald Trump scrapped a visit to Denmark amid a dispute with Danish Prime Minister Mette Frederiksen over her refusal to contemplate the sale of Greenland, an autonomous overseas region of the kingdom, to the United States.

“The administration does not seem to be rigidly process-based, so individual policy entrepreneurs may have more ability to advance issues that might otherwise be on the sidelines of the policy agenda,” Pincus said. “The Greenland situation is a good example.”