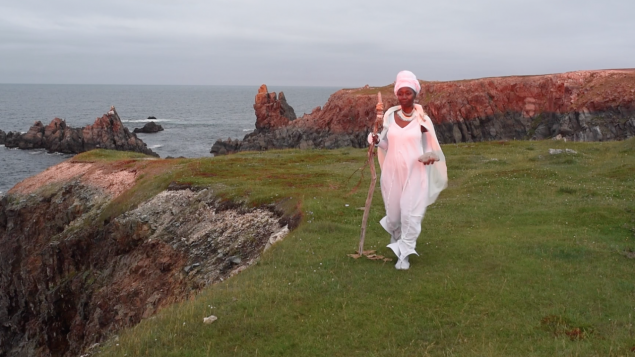 An exhibition at this year’s Bonavista Biennale in St. John, Newfoundland, highlights a dark part of the province’s history – the island’s involvement in the 18th century slave trade.

Few people know, but Newfoundland built several ships in the 18th century to transport mainly slaves from Africa to the Caribbean and America.

Toronto artist and academic Camille Turner was very surprised when she discovered all the documentation on these ships and that’s why she chose this angle to illustrate her artistic installation.

This week, Camille Turner has been on location filming her piece for #BonavistaBiennale2019! pic.twitter.com/6NOXYqbpXI

Her Afronautic Research Lab consist of a “futuristic reading room” as she describes it. “The public is invited to come into the room and engage with material which consist of newspapers from the 18th century and also books that look at the evidence of slavery and its connection to Newfoundland.”

Turner really focused her exhibition on the 19 slave ships that were built on the island. She explained to us how she represented them:

Information mostly found on the internet

To create her exhibition, Turner mainly used the Internet and the website slavevoyages.org in particular as official sources are lacking on the subject.

She also drew her work from a Harvard University database which compiles records of slaving expeditions between 1514 and 1866.

She found a lot of information about the ships themselves, but one thing was missing:

As she explains, she found a lot of documents on the expeditions, but what was missing were details about the trafficked people and their lives.

During her research, she discovered that most of the vessels were leaving from various African countries such as Sierra Leone or Senegal, for the Caribbeans to transport slaves. Some have even been to the American continent, to Mississippi and Charleston.

Turner’s aeronautics research laboratory has toured several cities in Canada and she explains that visitors are often surprised to discover this past history:

Still from video filmed and edited by Brian Ricks.

Turner’s travelling Afronautic Research Lab is on display at the Bonavista Biennale until September 15, 2019.

Bringing these stories to light

Camille Turner’s objective with this art exhibition is above all to highlight this hidden part of Canadian history.

And she’s only just begun to discover it, as she explains:

Still from video filmed and edited by Brian Ricks.

Research is currently being done in Atlantic Canada to understand the role the slave economy played in the region’s history.

Recently, a panel exploring Dalhousie University’s history of racism and links to slavery has issued its final report. It calls for an apology from the Halifax school, a provincial memorial of the slave trade and other forms of reparation.