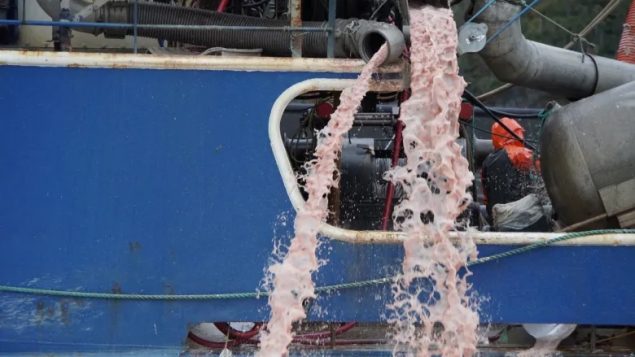 A fishing ship uses high powered vacuums to suck decomposing salmon from cage sites affected by the mass die off in Fortune Bay. The boats have been hired by the company Mowi, owners of Northern Harvest Sea Farms. (Chris O'Neill-Yates- CBC)

The fact is that a huge number of farmed Atlantic salmon died last month in pens in Newfoundland.

After that it gets murky as the company Northern Harvest Sea Farms, owned by Norwegian aquaculture giant Mowi, say the problem and environmental impact are nil, while other fishermen, conservationists, and scientists disagree. 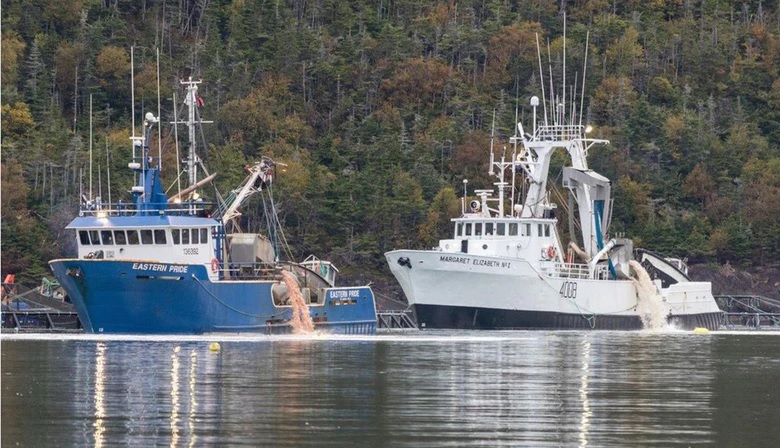 It is estimated, though not confirmed that as many as 1.8 million Atlantic salmon penned in ocean cages died ostensibly due to excessively warm ocean temperatures and a lack of oxygen as they crowded to the bottom of the cages for cooler water.

Jeffrey Hutchings, a marine biologist at Dalhousie University, says that may be the case, but that the unnaturally high density of distressed fish in the cages is a likely contributor.

The provincial fisheries minister, Gerry Byrne, indicates that he won’t jump to conclusions about the situation, adding that tissue samples have been sent for testing to the Atlantic Veterinary Collage on Prince Edward Island in addition to other tests underway at Fisheries and Land Resources, and the University of New Brunswick, but that there’s no danger to the environment. The Fisheries Resources result indicates no clinical disease and that the die-off is consistent with the claim of warm water. 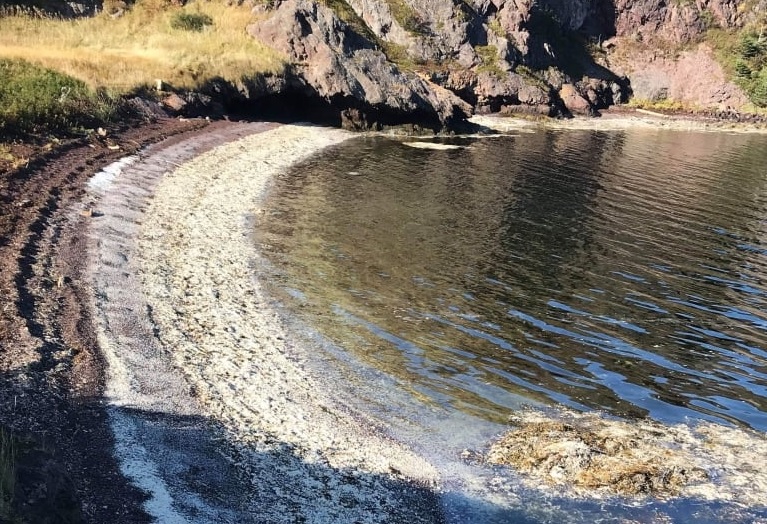 The Fish, Food and Allied Workers posted photos taken by harvesters Wednesday of salmon fat and debris washing up on the shore between Rencontre East and Belleoram. (FFAW)

Critics say the die-off first began about 3 weeks before anyone was notified. Neville Crabbe, spokesperson for the conservation group Atlantic Salmon Federation, speaking to a radio station in Halifax said,” “It does really speak to some of the bigger transparency issues that I believe are affecting public trust in the industry itself. We were certainly hearing rumours of something big happening, but the knowledge was kept from the broader public as this unfolded.”

Critics also allege the weight of the dead salmon on the bottom of the cages caused them to sink below the water level allowing other salmon to escape into the wild, something they’ve always been worried about. 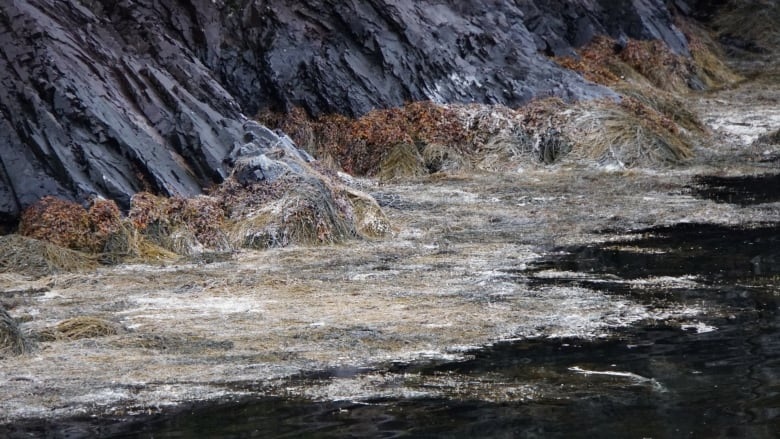 The white substance, which appears to be remnants of dead fish, is accumulating in coves and on the rocks in the nearby area. Conservationists also say there’s a thick coating of ratting sludge covering the floor of the bay and are concerned about the consequences to other marine life (Chris O’Neill-Yates/CBC)

They also claim dead fish sludge is metres thick in some places on the bottom of Fortune Bay where the operation is located. They say the rotting sludge can creage algae blooms which can suck oxygen from the water choking out species such as lobster, cod and other wild marine species.

Many are saying that regulations around the industry need to be tightened including lowering stocking densities in the cages, and where they can be located. The provincial opposition NDP and others are now calling for an independent inquiry.