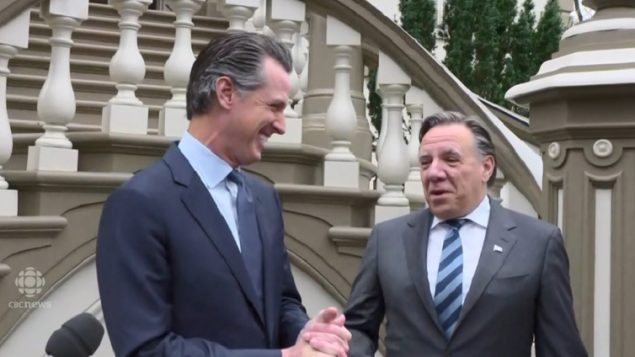 California's Governor Newsom smiles as Quebec premier Legault talks about religion saying all French-Canadians are Cahtolic during a brief photo op on Wednesday in Sacramento. (via CBC)

“All French-Canadians are Catholic”

It was another of those candid conversations between politicians caught by reporters. After the recent incident where Canada’s Prime Minister at a NATO reception was overheard in a group seemingly mocking the U.S. President, comes another interesting comment, this time by Quebec’s premier.

Francois Legault was on a business trip to California to promote Quebec business in that market and to discuss the carbon cap-and-trade deal between the two jurisdications, which used to also involve Ontario.

In a photo op with California’s Governor Gavin Newsom, Legault asked, “You’re Catholic, no?” Newsom replies he is, to which Legault makes the statement, “Yeah me too, all French-Canadians are Catholic, but you’re Irish?” Newsom affirms he is, adding, “with all the good and bad that comes with it. We have a lot of history, Irish Catholics”. Legault smilingly replies, “of course, I understand, we can talk about religious symbols”.

As they start to walk away Newsom, apparently quite aware of the heated controversy of Quebec’s Bill-21 “Laicity Bill” raises his hands and says, “Oh, I know it’s an issue for you guys,” adding, “I don’t want to get into that.”

The brief comment that all Francophone Canadians are Catholic caused a stir in Quebec, with at least one politician posted a cynical comment on his twitter page.

Approximately 90 per cent of Francophones in Canada live in Quebec and according to the 2016 Census, about 77 per cent of Quebeckers have French as their mother tongue. Attendance at Catholic and other churches in Quebec is declining. According to a report in the Globe and Mail news last year, about 40 churches fall out of use each year in the province and in some cases public money has been used to enable maintenance of some churches.

As for Bill 21 the secularism proposal would ban provincial civil servants in positions of authority (eg teachers, hospital staff, police, court workers, government offices etc.,) from wearing religious symbols at work such as a Muslim hijab,  Jewish Kippah, a visible Christian cross, or Sihk turban. Human rights advocates have widely criticised the Bill. A constitutional challenge is to be heard today by the Quebec Court of Appeal which could invalidate much or all of the Bill. 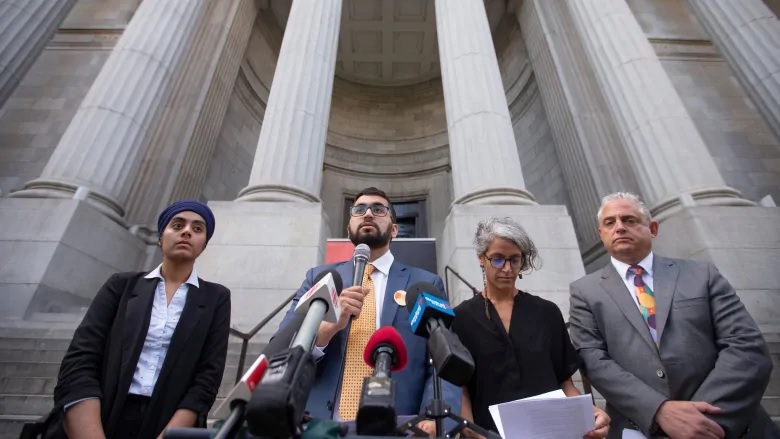 Representatives from the National Council of Canadian Muslims outside Quebec’s Court of Appeal. The court will deliver a decision today on the council’s request to have the highly controversial Bill 21 stayed. (Ivanoh Demers/Radio-Canada)

And as for the Quebec Premier, he is a non-practicing Catholic who told reporters in May that he “hopes God exists, otherwise I think life would be unfair”.