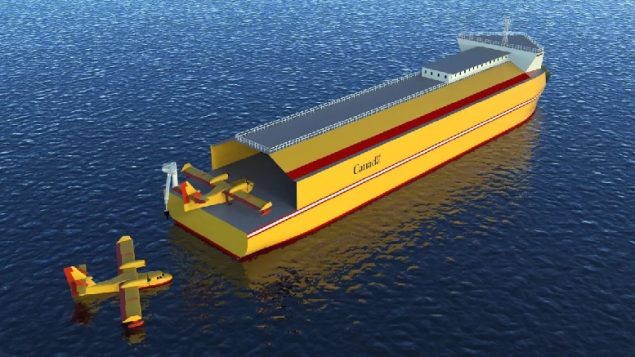 An artist's rendering of the proposed Canadian Australian Strategic Firefighting Initiative vessel. The proposed vessel could transport up to 14 of the specialised Canadair fiefighting planes bewteen continents (Davie Shipyard)

The current and deadly monster wildfires in Australia have prompted the revival of an idea first proposed four years ago.

This was based on the idea that the two countries seasons are inversed. While Australia bakes in record summer heat and massive fires, Canada is in winter with virtually no wildfires, and vice versa.

Bombardier Aerospace had designed the wonderfully efficient Cl-215, and later CL415 water bombers. The designs have since been sold to another Canadian operation, Viking Air Ltd. Of British Columbia. There are about 170 of the aircraft operating around the world with many in Canada   There have been suggestions that when not in use here, they could be flown to Australia. 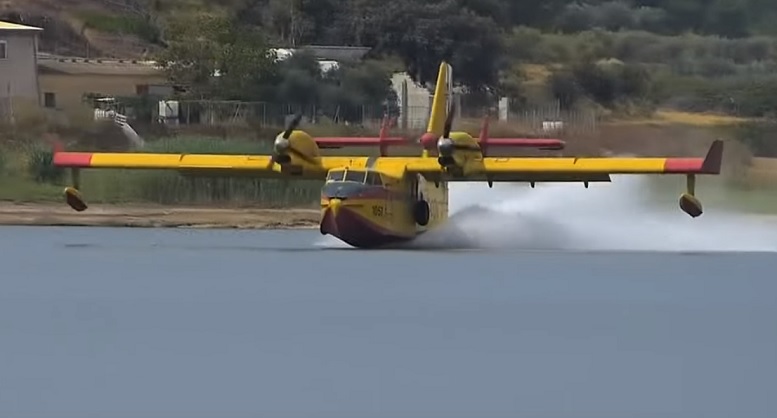 The Canadair skimming the surface in-flight and scooping up thousands of litres of water before returning to the fire site. The design enables continuous non-stop fire fighting efforts unlike other planes which have to fly back to base after each load and be refilled. (9-News Australia)

Canada’s Davie Shipyard, and aircraft manufacturer Bombardier proposed that because of this, they could build a specialised ship to carry up to 14 of the specialised planes which could sail between the two continents so that they’d be available where needed, when needed.

Speaking on Australia’s 9-News, former New South Wales fire commissioner Greg Mullins said recently “ We need the Prime Minister to get on the phone to Emmanuel Macron of France, and Justin Trudeau of Canada and ask them to send the purpose built fire fighting aircraft, because they could send dozens”

A seaborne transport would vastly reduce the maintenance costs for wear on airframe and engines, and the very real risks of flying into several countries along the way and over the vast ocean distance.

The advantage of the Canadian design is that they can operate continuously non stop by refilling their several thousand litre holds by skimming over the surface of a water body while in flight. Bucket carrying helicopters are slow, and other firefighting fixed wing aircraft have to return to an airfield for refilling, a long time-consuming process. 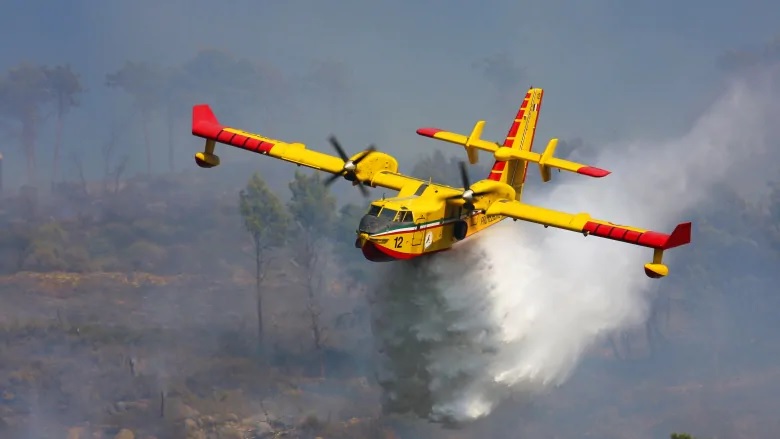 A CL-415 dumping its load of several thousand litres on a fire in italy. The planes are world renowned for their fire fighting efficiency. ( VIking Air Ltd)

While the original idea was discussed at the highest levels of government a few years ago, it was quietly shelved.

Massive fires in Canada, and this latest deadly disaster in Australia have revived the idea.

Speaking on Australia’s 9-News, former New South Wales fire commissioner Greg Mullins said recently “ We need the Prime Minister to get on the phone to Emmanuel Macron of France, and Justin Trudeau of Canada and ask them to send the purpose built fire fighting aircraft, because they could send dozens”

While the idea of a joint seaborne fire fighting force has not been discussed recently at the higher levels of either government, it has piqued the interest of many officials involved in fire fighting, especially as global warming has increasingly seen to be changing climates.

The only concern might be that climate change is lengthening the fire season on both continents so the seasons may begin to overlap.