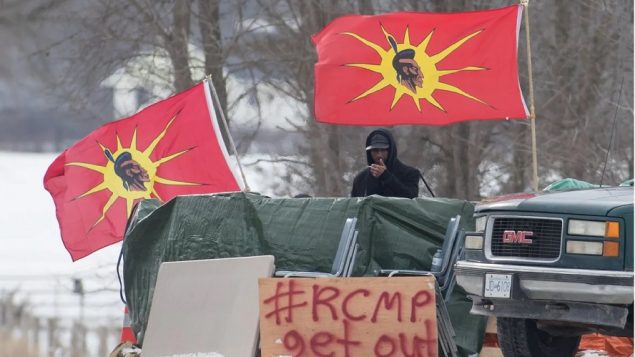 A protester stands between Mohawk Warrior Society flags at a rail blockade in Tyendinaga, near Belleville, Ont. on Sunday. The protest is in solidarity with a small group of Wet'suwet'en hereditary chiefs opposed to the pipeline in northern British Columbia. Other Wet'suwet'en chiefs are in favour of the pipeline (Lars Hagberg/The Canadian Press)

Rail blockades by indigenous groups and demonstrations in cities across Canada, continue today well into the second week.

Both indigenous and non-indigenous protesters have blocked bridges and roadways and rail lines across the country in support of a small group of hereditary Wet’suwet’en chiefs in their opposition to a gas pipeline across their claimed territory.

Coastal GaLink has received approval from all 20 elected indigenous band councils along the 670 kilometre route in northern British Columbia including the elected council of the Wet’suwet’en. 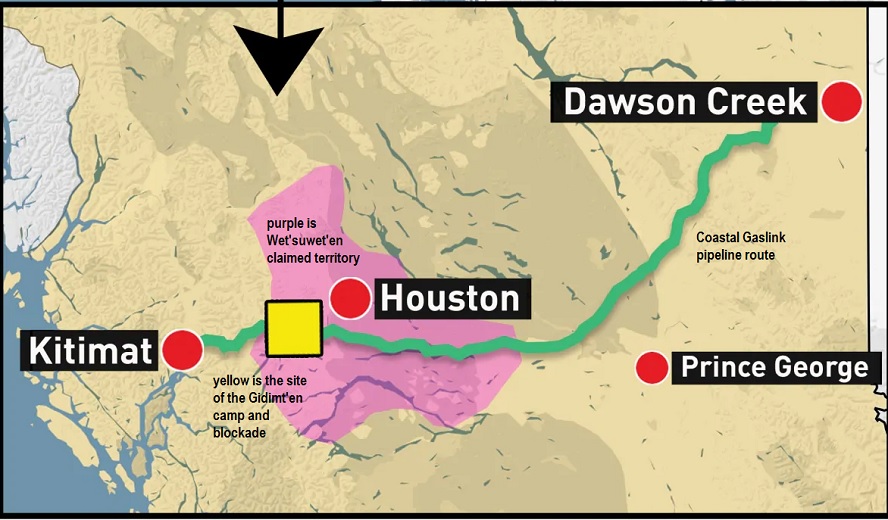 Route of the gasline across northern British Columbia, (CBC)

Prime Minister Trudeau has been under increasing criticism for his handling of the situation which is having serious economic repercussions for the economy.

While Via Rail has announced resumption of some limited passenger service, the majority of freight rail service continues to be blocked.

“The federal government must work with the provinces to put an end to the blockages. For every additional day that the blockage continues approximatively $425 million worth of manufactured goods that are usually carried by rail are sitting idle”. Dennis Darby, President & CEO of Canadian Manufacturers & Exporters 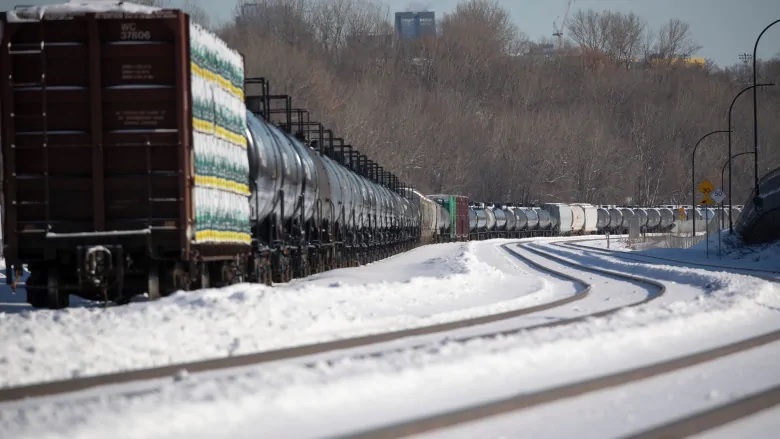 Freight train parked at the Turcot yards in Montreal appear to be fully loaded with goods and supplies. The propane industry is among those concerned about the stoppage. Many in eastern Canada are now concerned about propane shortages for heating on farms, in businesses, and homes. (Ivanoh Demers/Radio-Canada)

Some economists estimate the loss to the economy by the rail shutdown at $20 million per day. There are also concerns that some smaller manufacturers may not survive if they cannot get their products to market. Dennis Darby said many will have to start layoffs of workers. 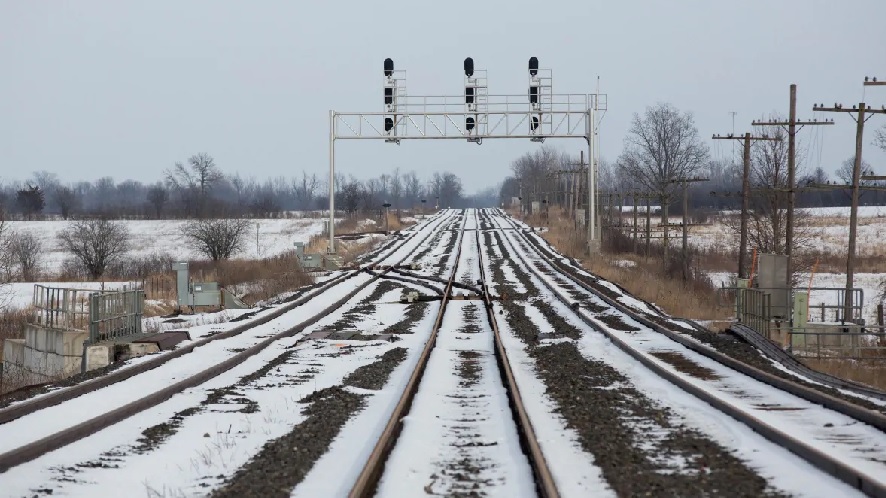 Millions of dollars of freight across Canada is shutdown because of blockades. Supply chains to manufacturers are cut off, as are shipments of products and of agricultural goods. Job layoffs have begun because of the shutdown (Lars Hagberg-The Canadian Press)

Farmers and others in the agriculture and food processing industry are extremely concerned about shipments being blocked. They are concerned not only about perishable goods being stalled, but also the potential for lost export markets.

Canadian National announced today it is embarking on temporary layoffs of some 450 workers because of the blockades. While ViaRail has just announced that 1,000 of its employees will be laid off due to the blockades.

An emergency meeting of Parliament yesterday resulted in heated debate during which Andrew Scheer, leader of the official opposition Conservative party, called Prime Minister Trudeau’s speech, “word salad” and the “weakest response to a national crisis in Canadian history”. 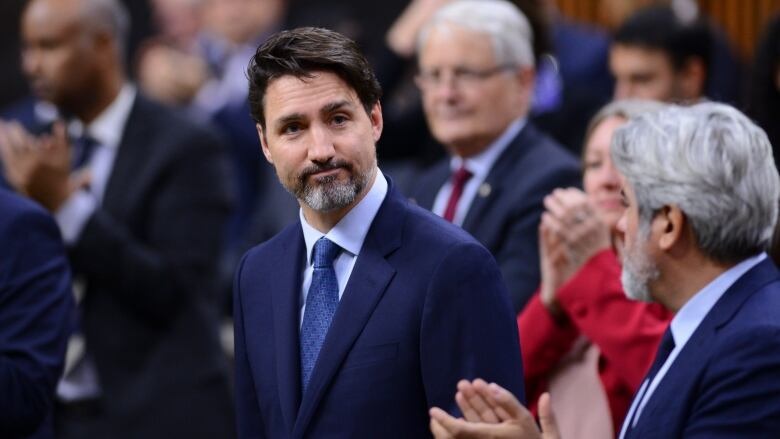 Prime Minister Justin Trudeau delivers a statement in the House of Commons on Parliament Hill in Ottawa on Tuesday, Feb. 18, 2020. Trudeau asked for patience as his government seeks a negotiated end to Indigenous-led rail blockades. The speech was condemned to varying degrees by opposition parties, but especially by Andrew Scheer of the official opposition Conservatives (Sean Kilpatrick/Canadian Press)

Trudeau, who has long billed himself as “inclusive”, then excluded the Conservative leader from a special meeting with the leaders of the other opposition parties, the separatist Bloc, the New Democratic Party, and the miniscule Greens.

Some federal and provincial ministers have requested meetings with the Wet’suwet’en hereditary chiefs but have so far been ignored.

News conference by Wet’suwet’en in favour of line

As for the Wet’suwet’en, the elected council which supports the pipeline with the millions of dollars and jobs it will bring to the community, will hold a press conference today to express their position. 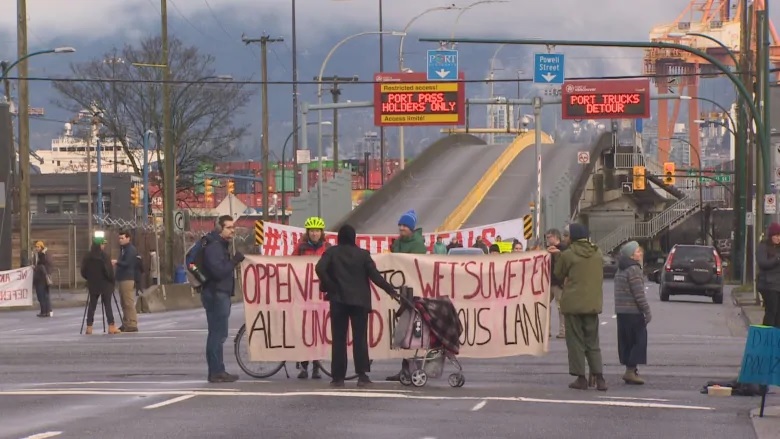 People gathered at the Clark Street entrance of the Port of Vancouver and blocked access on Saturday, Feb. 8, in solidarity with the Wet’suwe’ten Nation and their supporters opposed to the Coastal GasLink pipeline. Dozens of ships are idle in the port of Vancouver due to blockades halting rail shipments and pickups. (Doug Kerr-CBC)

In early January, the United Nations Committee on the Elimination of Racial Discrimination had called on Canada to halt work on the pipeline until indigenous consent was granted.

Karen Ogen-Toews is CEO of the First Nations LNG (Liquefied natural gas) Alliance and the former elected chief of Wet’suwet’en First Nation. In an open letter to the United Nations she wrote that the UN statement should be withdrawn and an apology given to the 20 First Nations who agree with the pipeline.

She expressed shock that the U.N. committee issued the statement “without investigation or research, and without taking into account the extent of existing First Nations support for the pipeline, and without consultation with those Nations”. She added, “that 20 First Nations participated extensively during five years of consultation on the pipeline, and have successfully negotiated agreements with Coastal GasLink. This is on the public record.”

A meeting between federal minister of Indigenous Services, Marc Miller, with the Mohawk in an attempt to end that blockade of rail lines near Belleville Ontario, met with no success. 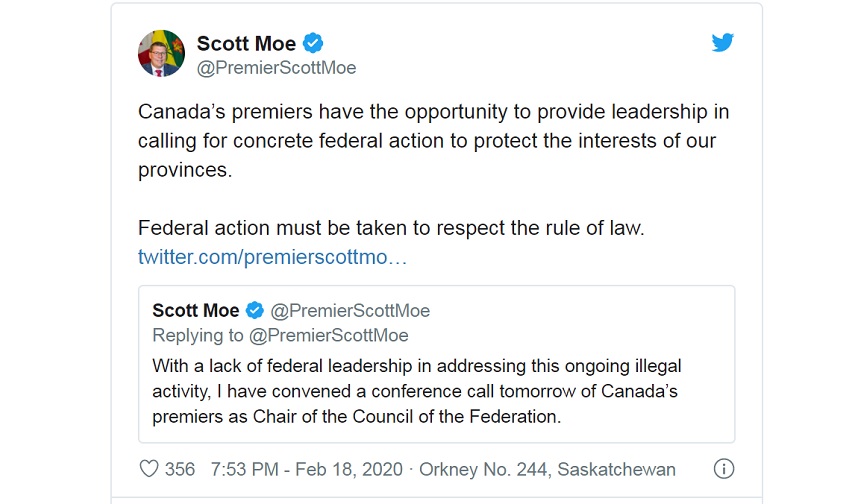 Saskatchewan Premier has arranged a conference all of all Premiers and Territorial leaders to discuss the crisis due to what he says is a lack of federal leadership. (Twitter)

Saskatchewan’s premier Scott Moe has scheduled a conference call with other premiers for today in light of Prime Minister Trudeau’s stance on the blockades and what he calls “a lack of federal leadership in addressing this ongoing illegal activity.”