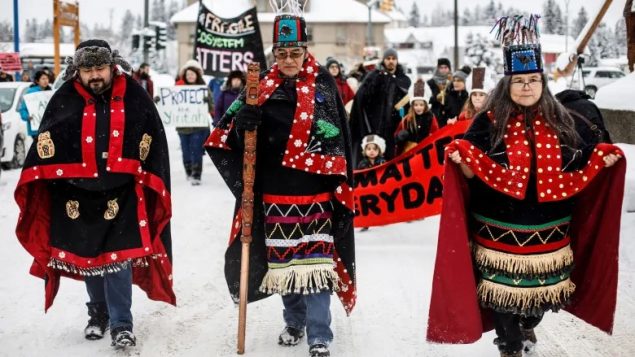 ‘Proposed arrangment’ but no pipeline agreement in Wet’suwet’en talks

Work resumed Monday in northern British Columbia on the Coastal GasLink natural gas pipeline that has sparked protests across the country in support of Wet’suwet’en hereditary chiefs who oppose the $6.6-billion project running through the band’s traditional territory.

The resumption follows what is being termed a “proposed arrangment” reached Sunday in Smithers, B.C., following negotiations between Wet’suwet’en hereditary chiefs and top ministers from the federal and the B.C. governments.

Details of the arrangement, which focused on the future status of 22,000 square kilometres of unceded Wet’suwet’ten traditional territory, were not released.

The arrangement still needs the approval of the Wet’suwet’en people and it did not contain any agreement on the pipeline and what effect it will have on the solidarity projects remains unclear.

Both the hereditary chiefs and the ministers said Sunday the talks represented what they called “an important step” in solving the issues involving GasLink but said they still disagree on how to move forward.

What effect the so-called “arrangement” will have on solidarity demonstrations and actions across  the country is unclear.

Near Montreal, Kahnawake Mohawks said Sunday they would retain their blockade of a Canadian Pacific Rail line that runs through their territory until they know more details of the Smithers talks, noting that the pipeline issue had not been resolved.

“That’s a very big issue, not only for the Wet’suwet’en chiefs, but for everybody,” Kenneth Deer, the secretary of the Mohawk Nation of Kahnawake, told Canadian Press.

Following the Smithers announcement, Coastal GasLink, which had suspended construction when the talks began last Thursday, announced it would resume construction activites in the Morice River area, beginning today.