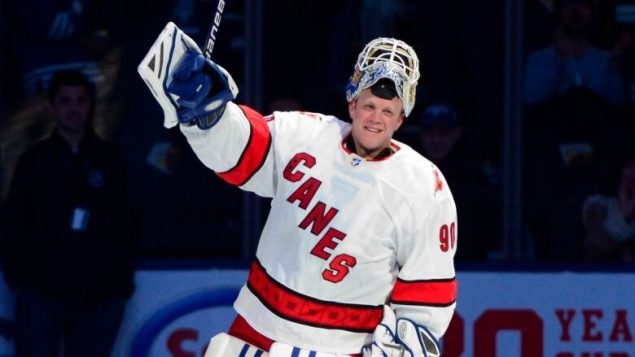 The emergency goaltender protocol that made David Ayres a star will remain as it is. (Frank Gunn/Canadian Press)

In a burst of sanity, National Hockey League general managers have decided there will be no change in the protocol that applies to emergency goalies.

It stays as it is.

Following 42-year-old David Ayres’s sensational leap into the North American spotlight after he came came out of the stands midway through the second period to help Carolina defeat the Maple Leafs in Toronto 6-3 on Feb. 22, the NHL–despite the oodles of free publicity and goodwill the event generated--had been flirting seriously with doing away with the rule that requires every NHL rink have an emergency goalie available in case of emergency.

There was lots of talk about making teams carry a third goalie so there would never be a repeat of Ayres’s Walter Mitty moment.

“There were a lot of discussions,” the NHL senior executive vice president of hockey operations, Colin Campbell, told reporters in Boca Raton, Fla. at the GMs’ annual meeting.

With files from CBC, NHL.com