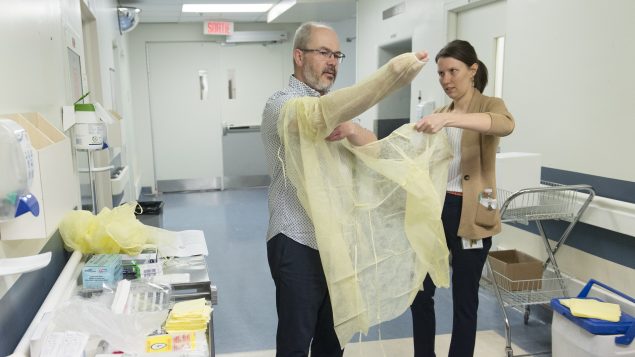 Health workers demonstrate how to put on protective clothing during a tour of a COVID-19 evaluation clinic in Montreal on Tuesday.(Graham Hughes/Canadian Press)

On the same day when the World Health Organization finally–officially–declared COVID-19 a “pandemic,” Canada’s federal government Wednesday announced a $1-billion package to deal with the impacts of the outbreak of the virus in this country.

The package includes $500-million to help provinces and territories pay for more testing and increase surveillance and monitoring.

It will also ease restrictions on employment insurance payments for people who need to take time off work and it waives the one-week waiting period to receive EI benefits.

More than 116,000 people have been infected worldwide with COVID-19 and over 4,000 have died, including one person in Canada.

As of Wednesday morning, Canada had reported 103 cases of COVID-19.

Those include 42 in Ontario and 39 in British Columbia, including two health care workers.

There are 14 cases in Alberta, seven in Quebec and one repatriated Canadian has the tested positive. 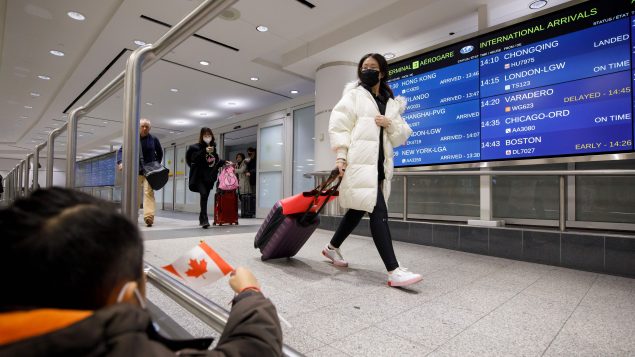 Travellers are seen wearing masks at the international arrivals area at Toronto’s Pearson International Airport in January. More and more travellers and workers at the airport are wearing masks as COVID-19 cases increase in Canada and around the world. (Cole Burston/AFP via Getty Images)

The Public Health Agency of Canada continues to say the risk remains “low” for Canadians but also warns that “this could change rapidly.”

It is also posting guidelines aimed at helping event planners figure out whether or not to cancel gatherings that involve a lot of people.

And health officials say a Canadian under quarantine at Canadian Forces Base Trenton, Ontario, has tested positive for COVID-19.

No details about the person’s identity were released except that he or she is now in isolation at the base, where 228 Canadians who had been on the Grand Princess cruise ship were repatriated early Tuesday morning.