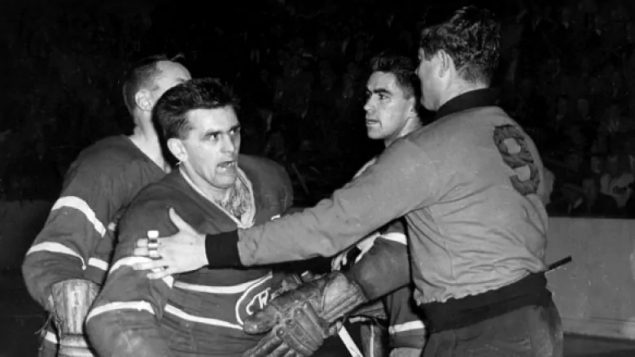 Hard to imagine but the NHL was an ever rougher game in 1955 than now. Rivalries among the six teams were bitter, and Montreal Canadiens super star #9 Maurice "Rocket" Richard was as fierce as they come. Involved in a fight in Boston, it would eventually lead to one of the biggest riots in Canada. (via Radio-Canada)

In 1955, there were six teams in the National Hockey league. Loyalties to a team and to individual players where they might usually stay with the team for years, was very strong. Nowhere was loyalty to a team stronger than in Quebec and ‘their’ team of the Montreal Canadiens.

And no player was loved more than number 9, the great Maurice “Rocket” Richard. He had become the first player to score 50 goals in a season back in 1945, averaging a goal a game in a 50 game season and the first to top 500 career goals.

Richard was quite literally Quebec’s hero, and especially so to Francophone Quebeckers.

The NHL back then was even rougher than now, with fists and sticks flying, and with no helmets, lots of smashed noses, ears and teeth.

On March 13 Richard was involved in a fight in Boston against a player he’d tangled with before, The stories vary as to why, but during the scuffle Richard punched the linesman trying to break up the fight. Richard was tossed out of the game, while the Boston player who apparently started the fight, only received a minor penalty. Montreal fans of course saw this as yet another example of unfair treatment of their Francophone star. 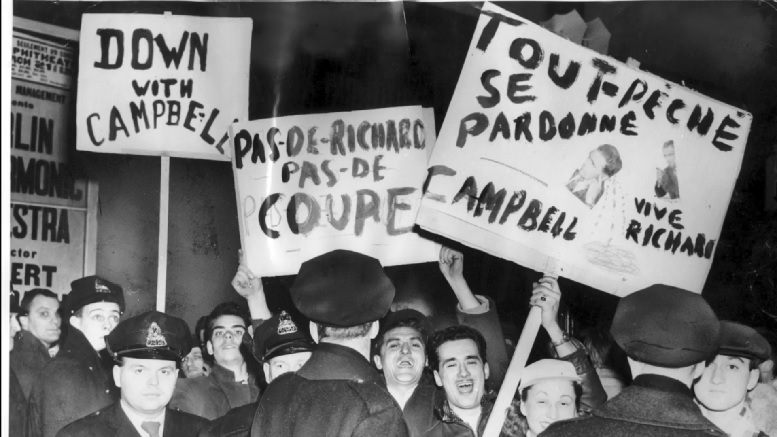 Angry Montreal fans protested against Richard’s suspension before the Montreal-Detroit match on the 17th. (Radio-Canada)

In any case, league boss Clarence Campbell was already angry at Richard  for having previously hit an official and the league’s five other owners wanted the hockey star  to be taught a lesson.

If Richard was out of the game, the other teams had a better chance at the championship, not the least of which was Detroit, vying with Montreal for a shot at the Stanley Cup. 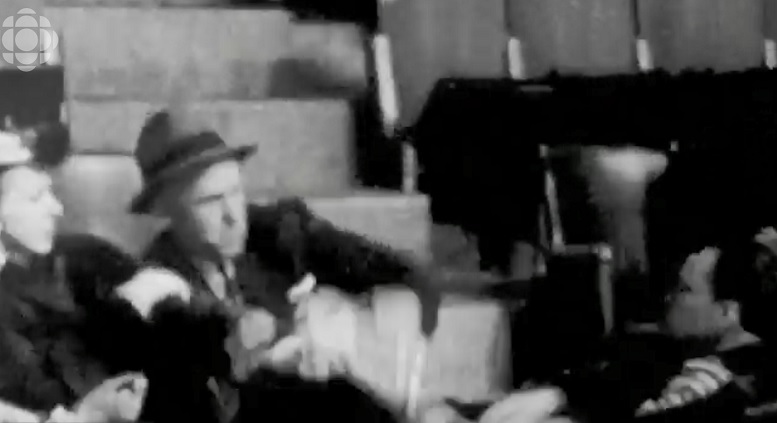 NHL president Clarence Campbell was already disliked by Quebec fans, but his decision to show up at the game after suspending Richard infuriated fans, several of whom tried to attack him but were held back by ushers and security. (Radio-Canada)

A hearing was held and Campbell ruled that Richard would be out for the final three games plus the playoffs. This infuriated the hockey mad Quebeckers, many of whom saw this as yet another example of an “Anglo” plot against their hometown hero.

Richard would sit out the first game on the night of the 17th against Detroit.

Tension was high but when Campbell showed up at the game, the fans began to toss garbage at him in the stands. The fact the Canadiens  were losing 4-1, didn’t help emotions. 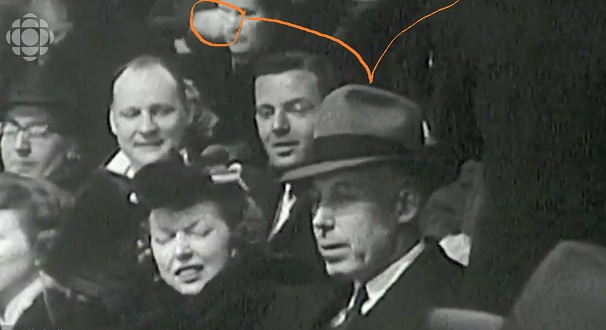 Campbell, relatively protected by security became the victim of tossed items, here he barely reacts when beaned by a tossed apple, while his secretary/girlfriend recoils. (Radioi-Canada)

Then a tear-gas bomb went off and the game was ended with the win being forfeited to Detroit. Fans evacuated into the street, the shortened and lost game being the spark that blew up an already inflamed situation. Quebec anger was unleashed in a riot on the street that saw cars smashed up, some fires set, and shop windows broken in a night long reign of vandalism. 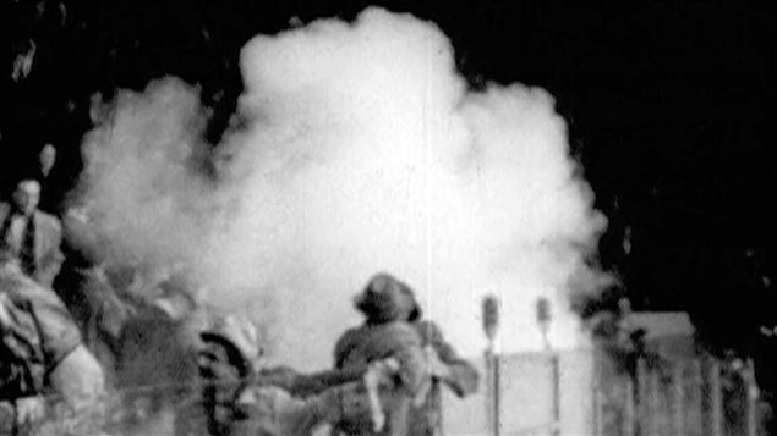 Someone releases a teat-gas canister in the middle of the game causing the match to be halted and forfeited to Detroit. Thousands of infuriated fans pour into street where they began to vent their anger is a wave of vandalism. (Radio-Canada)

Dozens were injured, many more were arrested. There were fears the riot would continue into the next day so Richard himself broadcast a message on the 18th to fans saying he would take the punishment and asking fans to calm down and support the team.

Richard would return to the rink the next season and lead the Canadiens to five Stanley Cup wins, retiring from hockey in 1960, but remaining a hockey legend and a larger than life hero to this day in Quebec.

As for the riot, it is seen today by some to be of more significance than just that of hockey support. While the so-called “Quiet Revolution” in Quebec is said to have to have begun in the 1960’s, leading to a bursting of Quebec Francophone pride, culture, and sense of identity, some assert that the first real demonstration of that identity as something different from “English Canada” was seen in this 1955 riot.

Other hockey riots have occurred since,