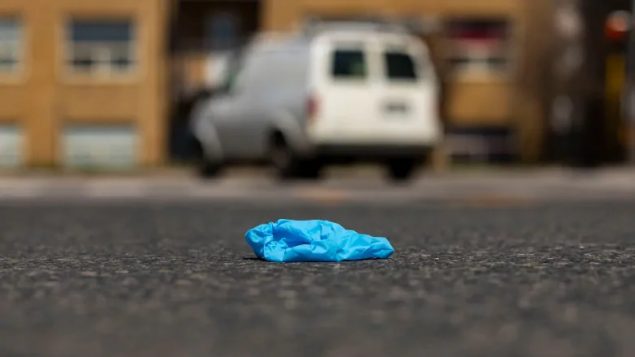 It’s the ‘nouveau litter’ of the pandemic. More Canadians are wearing medical type latex gloves and face masks as a way of hopefully protecting themselves from the SarsCoV-2 virus.

But it seems while caring about themselves personally, there’s a limit to that caring as there has been a noticeable increase in a new type of litter as people simply toss their ‘used’ gloves, masks and ‘wipes’ on the ground rather than properly disposing of them. As they are not recyclable, they should be put in garbage bins. 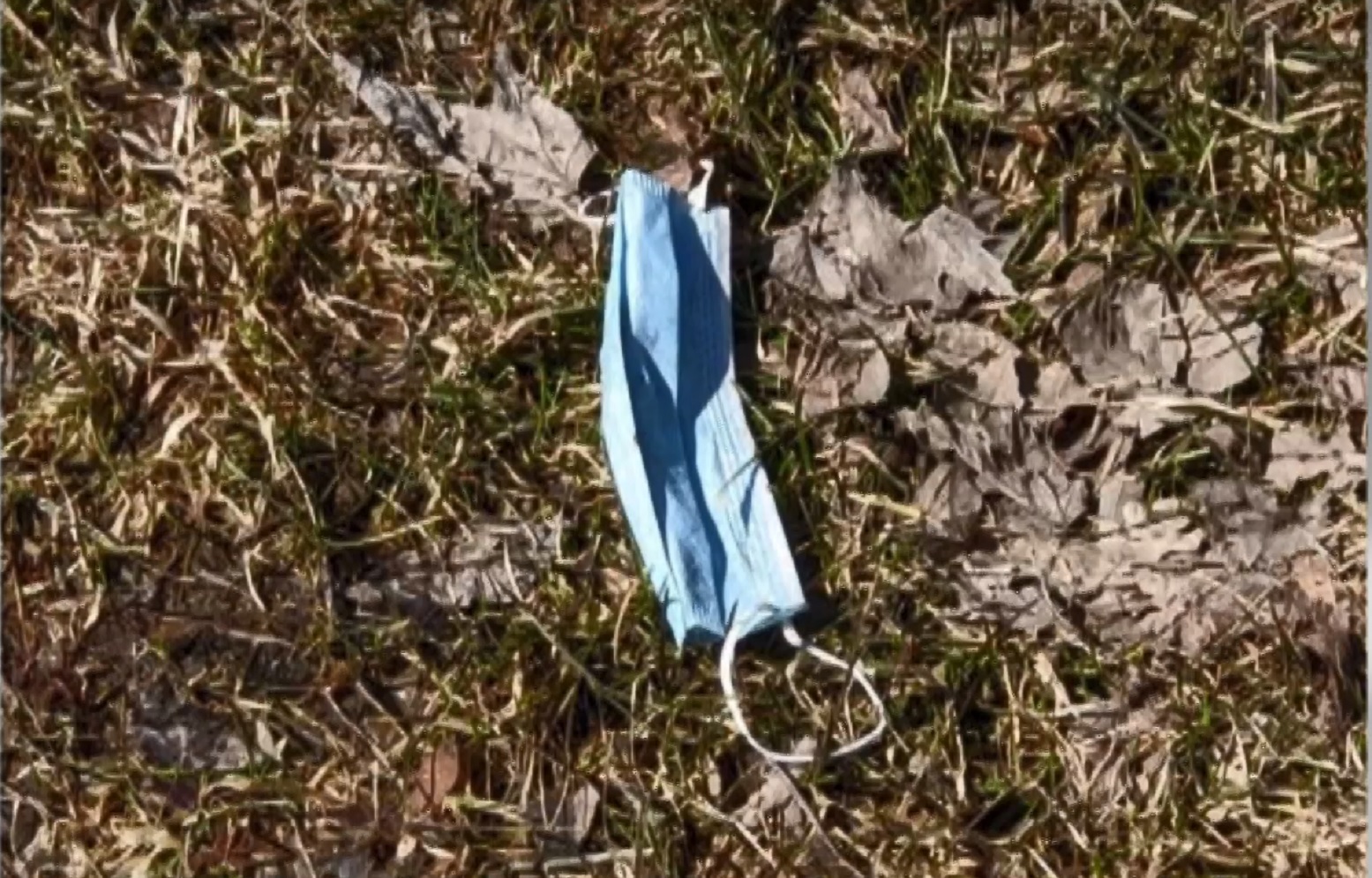 Littered face mask. A Montreal resident says he’s concerned for the safety of his very young son runs around green spaces and who may be encounter the litter with curious hands. (CBC)

Quoted in the CBC Toronto’s mayor noted Canada’s largest city has $500 fine for littering but added, “”While it seems like a small matter, it carries with it potentially a big risk. It’s the wrong thing to do. It is bone-headed conduct, and quite frankly, littering, even if you leave aside the health-care aspects of this. It is a risky behaviour. We’re asking people to stop it and we’re asking people to use the receptacles outside of hospitals and outside of food stores to look after these kind of things”. 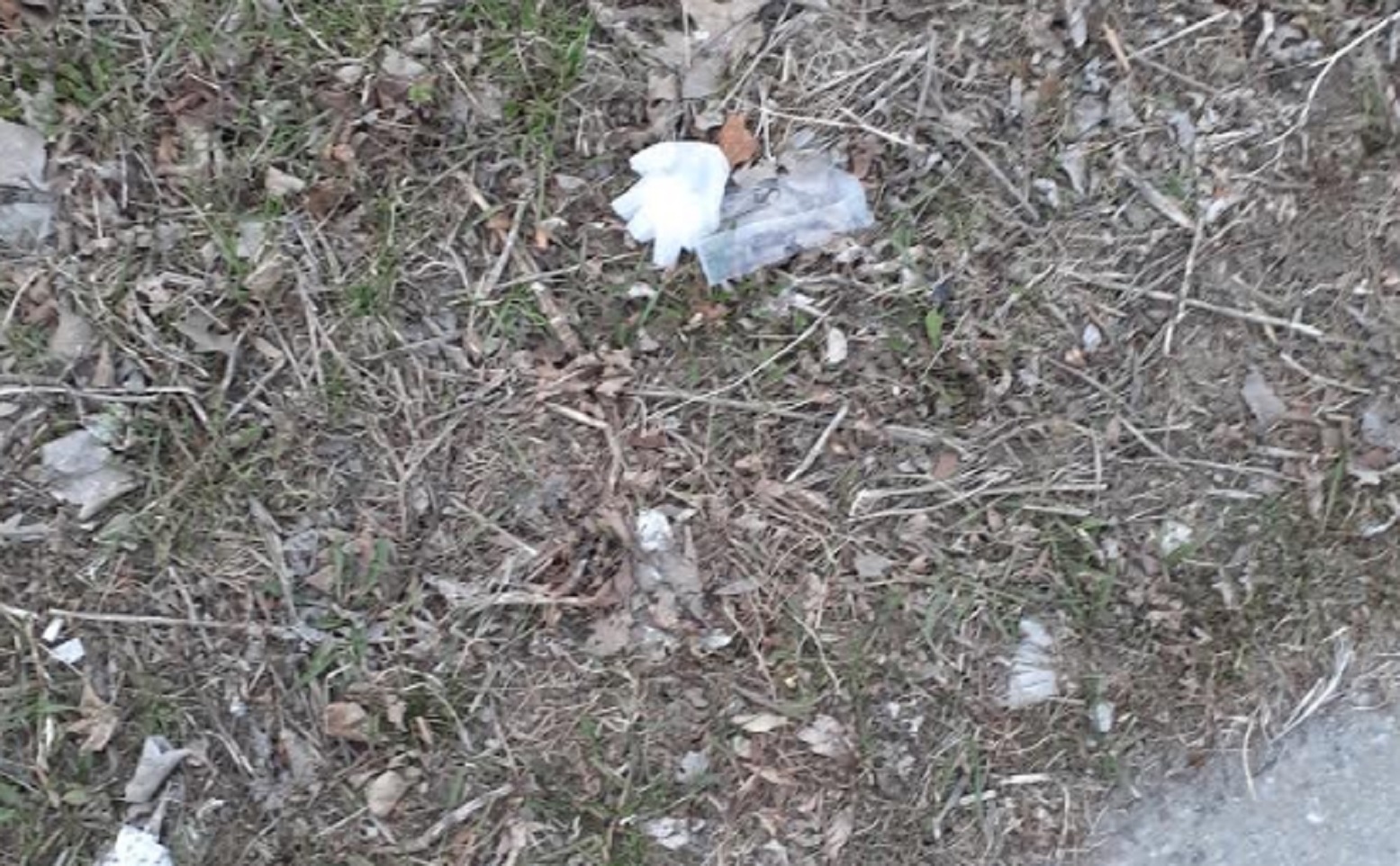 In Calgary, Brian Winch of Quality Maintenance has seen the increase in such litter. Quoted in the Canadian Press he

“A lot of people now, when they get gas, whether it be gloves or sanitary wipes, when they fuel up … even though there’s litter containers right by the pumps, they don’t go there. They just toss them on the ground”.

Jackie Holmes is a cashier at a large ‘No Frills’ grocery store who has also been disinfecting shopping carts during the pandemic. Quoted by CTV she said,” “People are wearing their gloves, going to their vehicle, emptying their cart, and then dumping the gloves on the ground,”. She adds that it’s the store staff who then have to pick them up, noting the added risk.

As for the risk of contamination, any virus on the gloves wouldn’t survive long exposed to the elements says  Benoit Barbeau, a virologist in the department of biological sciences at l’Université du Québec à Montréal (UQAM),  He adds even so it’s not something you should handle without taking protective measures yourself. 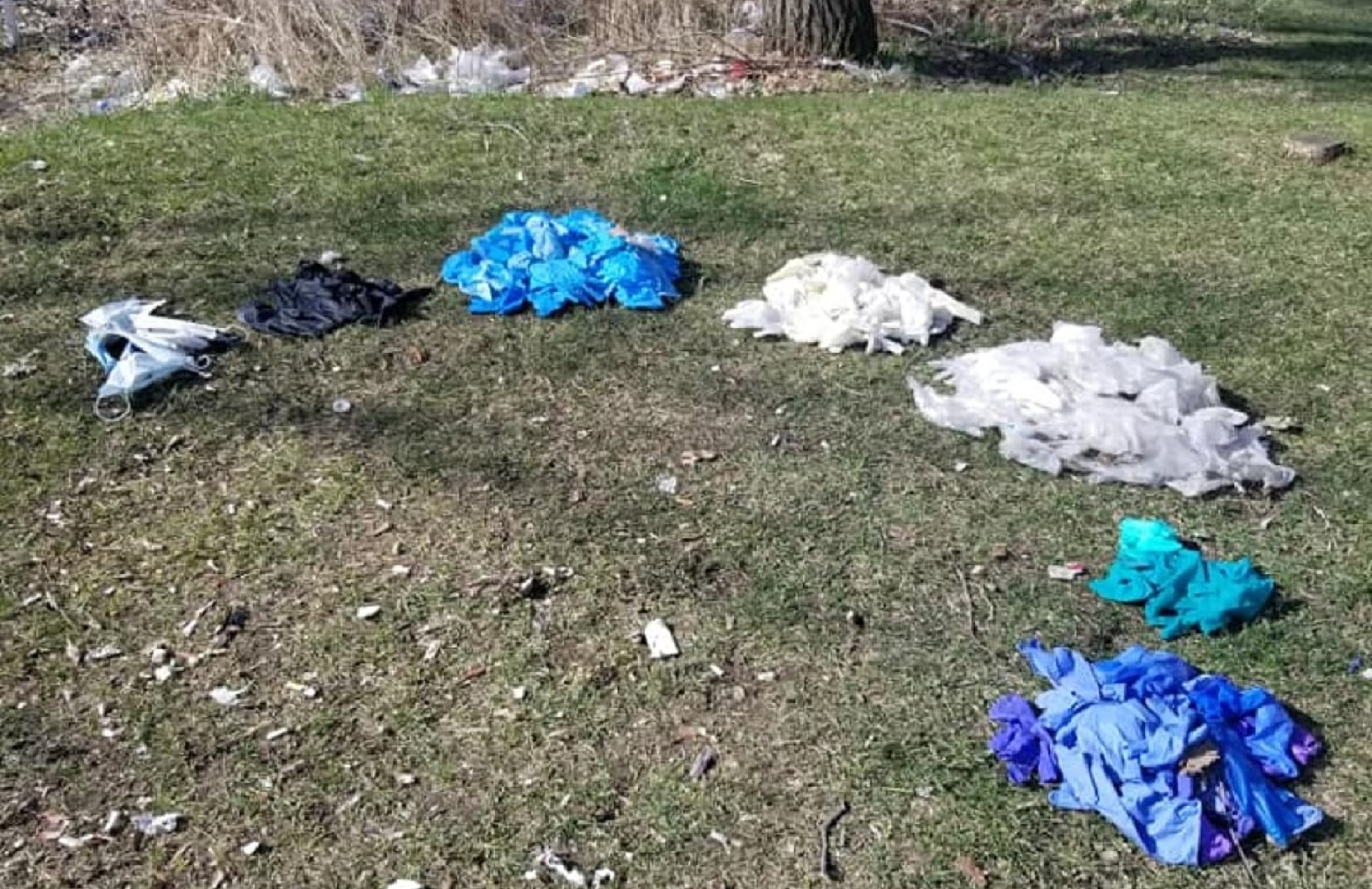 William Hollingsworth, a Scarborough, Ontario resident, posted this photo of piles of gloves and masks beside dumpsters used by a grocery store. The items were likely collected from its parking lot, he said. Whoever collected them took the time to separate the gloves by colour and to gather the masks in one pile, he added. (William Hollingsworth/Facebook-via CBC)

Are gloves in public even useful? Perhaps not. Dr. Chris Sikora, medical health officer for the Edmonton zone of Alberta Health Services says people who wear gloves are touching the same surfaces they would without gloves , door handles, hand rails, elevator buttons etc, and touching their faces as they usually do creating the exact same contamination risk as wearing no gloves.

Ontario’s Premier has echoed the sentiments of the mayors of Toronto, Edmonton and other major cities asking people to be more respectful Last week at a COVID-19 media briefing he said “I encourage everyone, number one, don’t litter. We live in a beautiful country, a beautiful province. It’s as simple as that. Don’t litter. It doesn’t matter if it’s candy wrapper or whatever,”