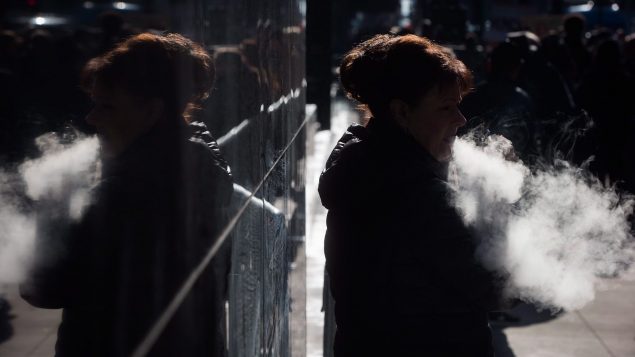 A woman exhales while smoking a vaporizer outside an office tower in downtown Vancouver, Tuesday, Feb. 28, 2017. A new study suggests that more and Canadian teenagers are vaping. (THE CANADIAN PRESS/Darryl Dyck)

A new survey of Canadian teenagers suggests that vaping is on the rise–big time.

The biggest takeaway from the study–published this week in the journal JAMA Pediatrics: The number of Canadian young people surveyed who said they had ever tried vaping rose to 40.6 per cent in 2019 from 29.3 per cent in 2017.

“That is stunning, and there needs to be pressing action by federal and provincial governments to reduce youth vaping through a series of measures,” Rob Cunningham, a senior policy analyst with the Canadian Cancer Society, told CBC News’ Adam Miller. 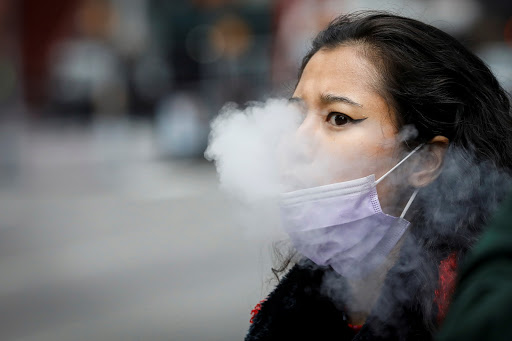 It found that the number of those who reported vaping in the previous month had more than doubled to 17.8 per cent from 8.4 per cent in 2017.

Those who reported using e-cigarettes more than 20 times in the previous month jumped to 5.7 per cent from 1.8 per cent. 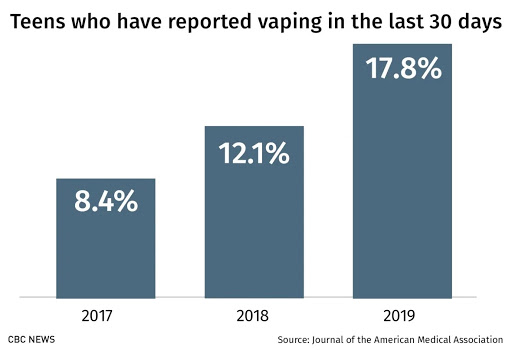 A new study in the journal JAMA Pediatrics surveyed more than 12,000 Canadian youth and found those who reported vaping doubled from 2017 to 2019. (CBC News/JAMA Pediatrics)

Nicotine–that oh-so-familiar drug that has claimed more than its share of victims for a mighty long time–is hanging around this street corner.

David Hammond, a public health professor at the University of Waterloo who led the study of the young Canadians, also looked at rates of vaping in the U.S. and U.K.

He found similar trends among American — but not British — young people.

Hammond told Miller that is largely because the European Union has put a cap on the amount of nicotine allowed in e-cigarettes–at 20 milligrams per millilitre–while Canada and the U.S. have not.

According to Health Canada, the maximum amount of nicotine content currently allowed in e-cigarettes in Canada is more than triple that of the EU, at 66 milligrams per millilitre. 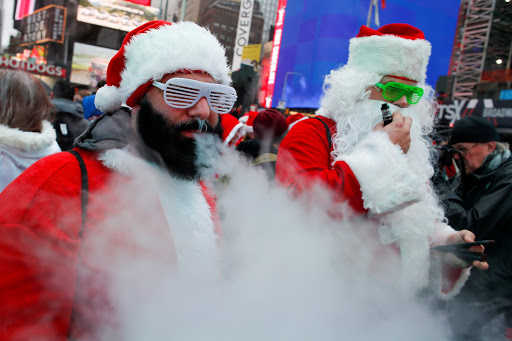 In January, the Canadian Medical Association termed Health Canada’s proposals “not sufficient,” saying proposed regulations provide the vaping industry with “too much latitude in their promotion activities.”

The CMA noted that vaping advertising has succeeded in attracting more and more youth to vaping, even when the advertising was not directed at them.

Health Canada’s proposals came in response to months of increasing pressure to crack down on the vaping industry, which heavily promotes its products in stores and other public places.

As well, ads and promotions from vaping companies are widely used across many social media platforms.

Asked about the latest survey, Health Canada said in a statement to CBC News it is “concerned about the rapid rise in youth vaping” and that the government has taken steps to address the issue including investments in public education, “intensified enforcement” of legislation and additional regulations.