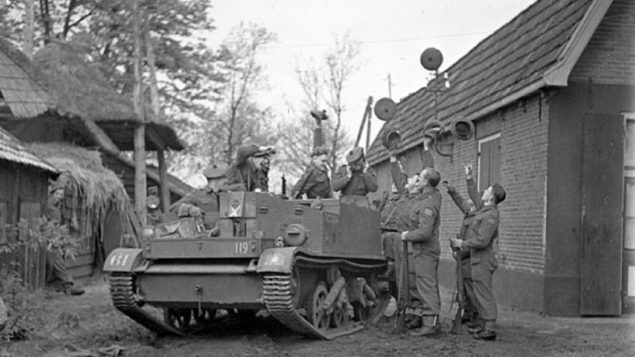 After a year of bitter fighting through Sicily and up through Italy, Canadians moved to Europe where thousands stormed ashore on D-Day eventually ending the war in Europe 75 years ago today

Major public celebrations to note the several landmark events leading up to the final victory in Europe (VE-DaY)  have been forced to cancel due to the pandemic. In their place a series of alternative and informative activities have been created online by many related institutions. This includes the Juno Beach Centre, Canada’s main interpretive centre and museum of the war effort located at the invasion beach in Normandy France

Marie Eve Vaillancourt is exhibitions and development manager for the centre. She says the long planning that went into the expectation of public events in and with the centre for surrounding cities and Holland, all had to be quickly turned around and online content created.  She says they’re very proud of the online content which is itself informative and at times emotional. She says it’s important to inform and remember these events and people no matter by what method.

Seventy-five years ago through equally bitter and deadly fighting, Canadians pushed through Normandy and northern France and into the Netherlands, liberating along the way to the grateful joy of citizens. Other Canadians moved towards and into Germany itself, to eventual total victory.

Dutch citizens cheering on the street and climbing aboard a Canadian C15TA armoured truck in Rotterdam to celebrate the Canadian Liberation, May 1945 (LAC PA-116668)

Major public celebrations had been planned for this landmark anniversary as Canadians liberated town after town in April and into May. A huge celebration has been planned to mark Operation Faust when the Canadian army negotiated a unique ‘truce’ to truck food supplies to starving Dutch through still armed German lines.  The German forces there surrendered  to the Canadians a few days later, and  of course the final surrender of all German forces on May 7, to take effect May 8 ending the war in Europe, or Victory in Europe Day (VE-Day).

Ms. Vaillancourt notes that while there is very much an important human aspect to the crowds and speeches and interpersonal contacts, the online stories and information will give another aspect to this time. It will allow for greater individual learning experience, and perhaps prompt discussion within families.