That is a matter for debate at a later date.

What is certain is that the Grey Cup has long played no small role helping to forge a Canadian identity–especially in Western Canada, and certainly in Saskatchewan, where people take the Canadian Football League very seriously.

But like so many other things in Canada, the CFL is on the ropes these days–laid low by COVID-19.

Usually, the regular season is in full swing right now–games that will lead two teams to the Grey Cup in the late fall.

So far, there’s been no season.

And it is not looking especially good right now that there will be one.

Three weeks ago, the league asked the federal government for a helping hand–to the tune of $150 million, should the season be completely cancelled.

Few are holding their breath on that one.

On Wednesday, the CFL announced that even if there is a season, it will scrap its usual Grey Cup Festival format–that is a long-time pre-fixed scheduled time and place announced well in advance of any given season.

It was supposed to be played this year in Regina, home to the Saskatchewan Roughriders and to members of Riders Nation, the Green Wave–generally considered the most loyal fans in the CFL.

In a statement sent to season ticket holders across the country, the league said Regina would no longer be hosting the 2020 Grey Cup game. Regina’s Mosaic Stadium is now set to host the 2022 Grey Cup, after the 2020 festivities were postponed due to COVID-19. (Glenn Reid/CBC News)

Should a shortened season take place, the championship game will be hosted by the team that qualifies for the Grey Cup game and has the best regular-season record.

“This gives all nine CFL teams a shot at hosting the Grey Cup in this unprecedented year,” commissioner Randy Ambrosie said.

The league, the CBC’s Devin Heroux reports, is also considering moving the Grey Cup — usually played in November — into December as it explores every option to play as many games as possible this season.

It also means, Heroux writes, that Regina has now been awarded the 2022 Grey Cup game, while Hamilton will host the title game in 2021.

“The plan for the Grey Cup in 2021 remains unchanged. The Hamilton Tiger-Cats will host for the first time in 25 years,” Ambrosie said. 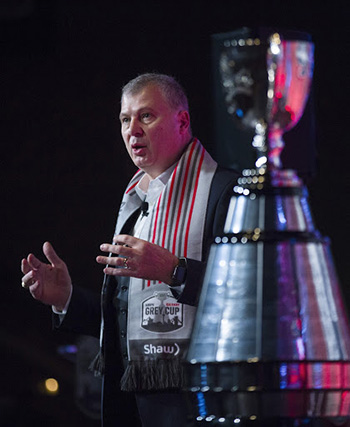 “To our amazing fans in Saskatchewan, we look forward to once again celebrating your passion for the CFL with a Grey Cup game and Festival just a little down the road.”

Heroux reports that whether or not there will be a 2020 season remains a big question mark at this point, but Ambrosie said should a shortened season take place, it would begin in September at the earliest.

“There are several reasons, including the continuing restrictions on assemblies, travel and border crossings,” Ambrosie said in a release.

“Notably, several provinces and municipalities have already decided to prohibit until Sept. 1, all sporting events featuring large gatherings,” Ambrosie said in a release.

“We are examining all possibilities with both public safety and financial viability in mind. It’s just too soon to speculate on what a return to play in September might look like,” Ambrosie said.

If nothing else, watching Ambrosie tiptoe through the financial and political tulips  has been an object lesson in the art of agility.

He is a former offensive lineman, a species that tends to trend BIG.

But give the guy full marks for tap dancing across the barren sporting landscape with poise and aplomb.

“This gives all nine CFL teams a shot at hosting the Grey Cup in this unprecedented year.”