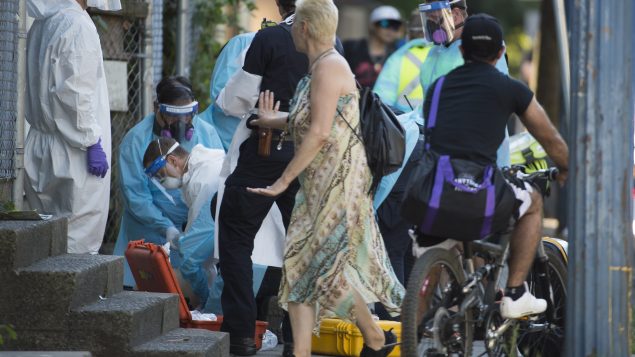 A passerby looks on as paramedics perform chest compressions to an individual in Vancouver’s Downtown Eastside on Thursday. (THE CANADIAN PRESS/Jonathan Hayward)

As children return to school and Canadians keep their collective fingers crossed that there will be no COVID-19 second wave, Prime Minister Justin Trudeau is warning that the country remains in the middle of the COVID-19 health crisis. 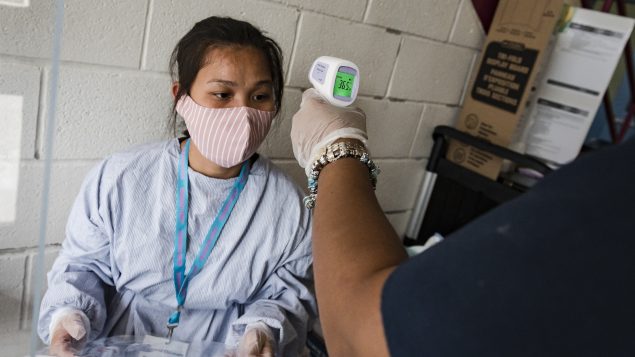 Rachana Eng’s temperature is taken at a COVID-19 screening at an entrance of Yorkwoods Public School in Toronto, Ont., on Wednesday, Aug., 26, 2020. THE CANADIAN PRESS/Christopher Katsarov

“We’re still in this crisis mode. We are still in the middle of a pandemic. We’re going to have to learn how to continue to live with COVID-19 for many, many more months.”

Trudeau said the more Canadians continue being vigilant — washing their hands, wearing masks and avoiding large gatherings — the stronger and faster Canada will emerge from the pandemic.

Trudeau’s comments followed a conference call with the premiers and territorial leaders earlier Thursday when he agreed to hold a virtual first ministers meeting on federal health care transfers.

His agreement came a day after Quebec Premier François Legault and Ontario Premier Doug Ford called for a significant increase in federal funding for health care.

Ottawa has committed to transferring $19 billion to the provinces and territories to help with the fallout from the COVID-19 pandemic, but the premiers said that money is a one-time transfer. 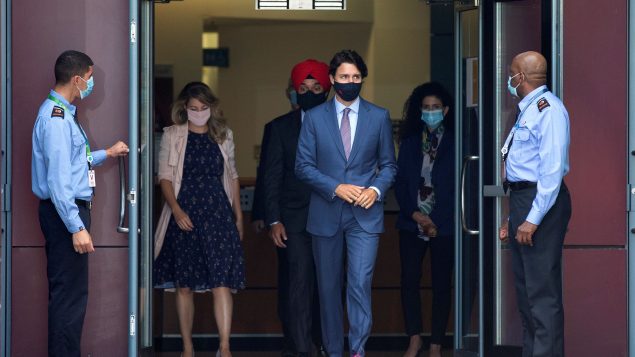 Prime Minister Trudeau arrives to speak to reporters after visiting the National Research Council of Canada in Montreal, on Aug. 31. Trudeau told a Liberal Party virtual fundraiser on Thursday the COVID-19 pandemic is a long way from over.(REUTERS/Christinne Muschi)

The federal government will transfer almost $42 billion to provinces and territories for health care in the current fiscal year under an arrangement that sees the transfer increase by at least three per cent each year.

Legault said Wednesday that amounts to roughly 21 per cent of health-care costs.

“It’s not a new problem but it’s a problem that is increasing every year and increasing because of the expenses related to COVID-19,” Legault said.

“But because of the aging population, because of new drugs, new technology, we need more help from the federal government.”

With files from CBC News, The Canadian Press (Paola Loriggio) Government of Canada