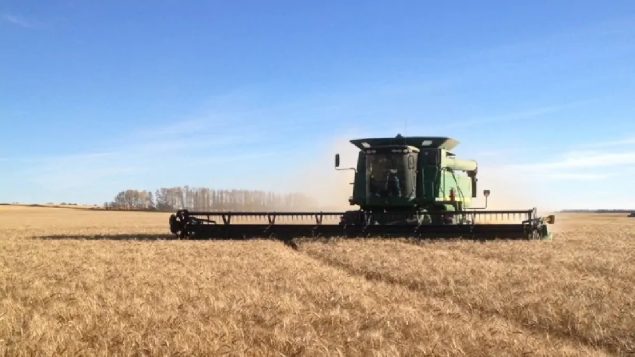 A Grain Farmers of Ontario survey conducted this summer found 61% of its members fear they may not survive the COVID-19 pandemic without financial help from government and 55% say they won't be able to cover the costs of producing barley, corn, oats, soybeans and wheat. A new media campaign hopes to spur public awareness of their plight in the face of huge subsidies to American farmers from the U.S government ( submitted by Bill Hetland via CBC)

“Farmers need to be able to cover the cost of production or many of them will not be able to survive much longer.”reads a public statement from farm organisations in eastern Canada. That statement comes in regard to a huge U.S. farm aid programme and as Canadian grain farmers are already financially hurting from the federal carbon tax.

For the first time, three major grain farmers groups in eastern Canada have come together in a united campaign for help against U.S subsidies to American grain farmers.

The Atlantic Grains Council, the Grain Farmers of Ontario, and Producteurs de grains du Québec have come together to create a media campaign to raise awareness of their plight which they say is worsened by the Trump government’s $32 billion farm aid package.

Those groups combined represent 40,000 grain and oilseed farmers in the maritime provinces, Ontario, and Quebec.

In a statement, Markus Haerle, Chair, Grain Farmers of Ontario, said, “We want the public to better understand that while President Trump is protecting his farmers,  Canada may lose many of its farms because we can’t compete. Down the road, Canada loses its ability to grow its own food, and that’s a dangerous situation for all Canadians”.

The groups say the U.S subsidies not only gives U.S competitors and advantage on price, but allows them as well to invest in their operations.

The Canadian Federation of Agriculture (CFA) and the Canadian Agri-Food Policy Institute (CAPI) are aslo concerned about the situation.

Apparently referring to the agricultural sector over the failure on the Liberal’s trade deal with the EU  (CETA) to deliver on its promises) CAPI was quoted in National Newswatch with the comment, “There is an interesting challenge in the government’s commitment to compensate farmers for their losses as a result of trade agreements. However, it is worth noting that there was no parallel commitment to ensure the sector can take advantage of the access those agreements were supposed to provide.”.

The farm groups want Prime Minister Trudeau to respond to the U.S subsidies the same way he has responded to protect Canadian aluminium and steel producers.

They’re also not calling for direct payment to farmers but rather for the government to provide more funding for the AgriStability business risk management programme.

Grain Farmers Ontario: Sep 28/20: combined farm group statement: Trudeau government must fight for farmers like it has for aluminium and steel industries