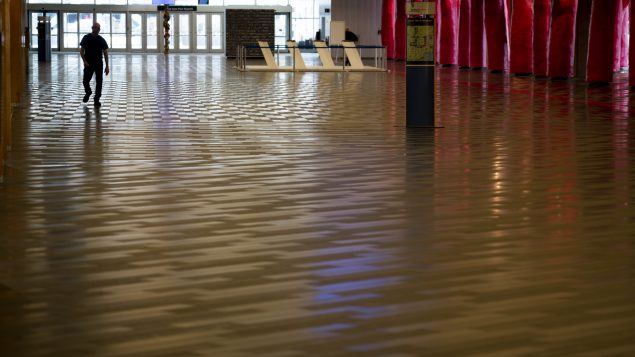 A man walks through a near deserted Convention Centre in Montreal on in March. The cancellation of business conferences and conventions across the country is costing cities and businesses hundreds of millions of dollars in lost revenues because of COVID-19. Today, the federal government announced more funding for small and medium-sized businesses. (THE CANADIAN PRESS/Paul Chiasson)

The federal government is providing $600 million in new funding to help small and medium-sized businesses deal with possible lockdowns amid a second wave of the COVID-19 pandemic.

Prime Minister Justin Trudeau and Minister of Economic Development and Official Languages Minister Melanie Joly made announcement today in Ottawa, saying the money would be directed toward various sectors, including tourism, manufacturing and technology. 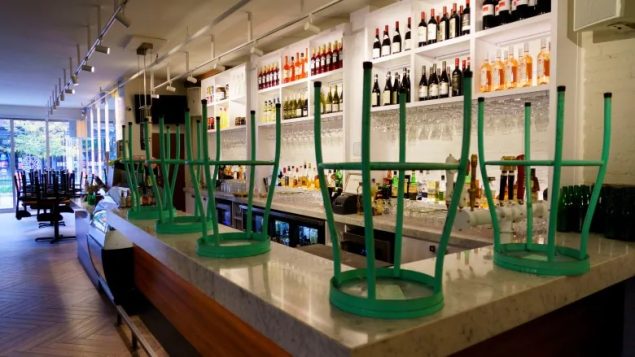 Chairs and bar stool are stored at a pizza restaurant in Montreal on Wednesday. Bars, restaurant and dining rooms in red zones in Quebec are closed until Oct. 28 because of government measures to fight COVID-19. The Canadian Federation of Independent Business estimates that 160,000 small or midium-sized businesses in Canada–about 14 per cent–are at risk of closing for good because of the pandemic. (THE CANADIAN PRESS/Paul Chiasson)

It will be added to $962 million already invested in the Regional Relief and Recovery Fund.

About $456 million of the new money will be made available to help businesses struggling to bridge their finances through another lockdown and will be distributed through regional development agencies. 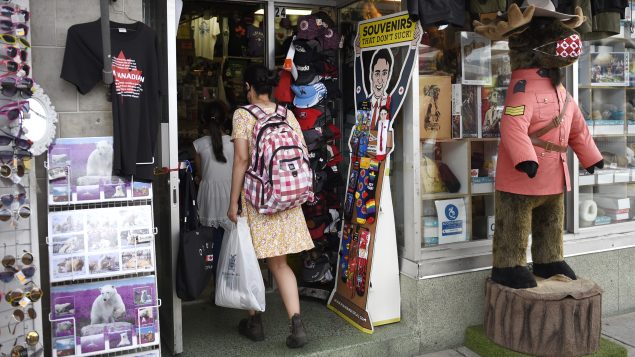 A moose in an RCMP uniform wearing a mask and a cartoon cardboard cutout of Prime Minister Justin Trudeau greet customers at a store selling souvenirs in the Byward Market in Ottawa on July 12 in the midst of the COVID-19 pandemic. Large and small, businesses that rely on tourism have been hit hard by the virus. (THE CANADIAN PRESS/Justin Tang)

Another $144 million will help provide capital and technical support to rural businesses and communities through the offices of Community Futures Canada, which provides small business services to rural communities.

The CBC’s Louise Blouin reports that the Canadian Federation of Independent Business estimates that 160,000 small and medium-sized businesses in Canada–about 14 per cent–are at risk of closing for good due to COVID-19. 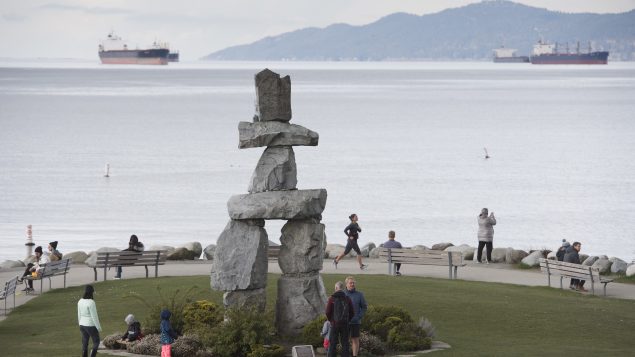 People attempt to physical distance themselves from one another as they walk along the seawall in Vancouver on March 31. British Columbia’s tourism and hospitality sector will be likely be getting some help from new funding announced today by Prime Minister Justin Trudeau. (THE CANADIAN PRESS/Jonathan Hayward)

The tourism, hotel and catering sectors are particularly threatened.

In a televised address to the country following last week’s speech from the throne, Trudeau warned that COVID-19’s second wave had already begun, warning that “Canada is at a crossroads.”

On Thursday, he announced plans to spend nearly $10 billion over three years in infrastructure initiatives that it hopes will help create some of the million jobs it promised in last week’s throne speech.

Pariamentary budget office estimate
The parliamentary budget officer says Crown corporations have handed out an estimated $422 billion in “liquidity support” to businesses since the start of the pandemic. Four Crown corporations account for roughly $236 billion in loans or deferrals handed out since the start of the pandemic to make it easier for businesses to manage costs. The measures are mostly to be repaid, with just some portions of loans being forgivable, meaning they are unlikely to have a large impact on the federal deficit. But budget officer Yves Giroux warned they represent a significant expansion of the government’s financial footprint and exposure to risk from bad debts that would hit Ottawa’s bottom line. Even more problematic, he says, is the lack of public reporting of potential budget costs and risks. Giroux says one outlier is the Bank of Canada, which reports weekly on its asset purchases, which have added $186 billion to the central bank’s balance sheet since March, not including about $234 billion in federal debt. (The Canadian Press,11:37ET 02-10-20)