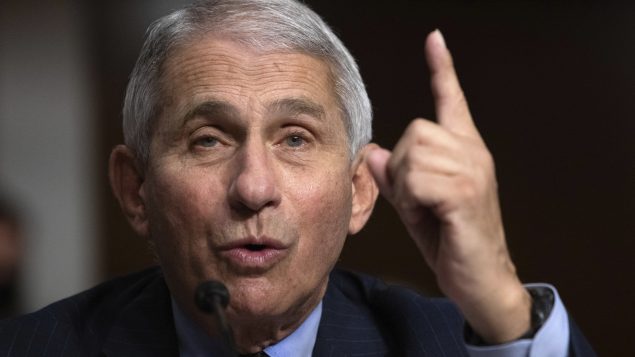 Dr. Anthony Fauci, director of the U.S. National Institute of Allergy and Infectious Diseases at the National Institutes of Health, listens during a Senate Senate Health, Education, Labor, and Pensions Committee hearing on the federal government response to COVID-19 on Capitol Hill in Washington, D.C. on Sept. 23. In a wide-ranging interview with CBC News on Tuesday, Fauci urged Canada to 'double down' in its fight to top the spread of the virus. (THE CANADIAN PRESS/AP-Graeme Jennings, POOL)

Dr. Anthony Fauci, likely the most famous infectious disease expert in the world thanks to sporadic attacks on his character and expertise by Donald Trump, says Canada needs to “double down” on public health measures until a COVID-19 vaccine becomes widely available.

Fauci made the comments in a phone interview from Washington with CBC News on Tuesday.

They came as the pharmaceutical companies Pfizer and BioNTech announced new test results that show their vaccine is 95 per cent effective and that they will now go to U.S. authorities to ask for emergency approval for use.

And they came as Canada topped 300,000 coronavirus cases. 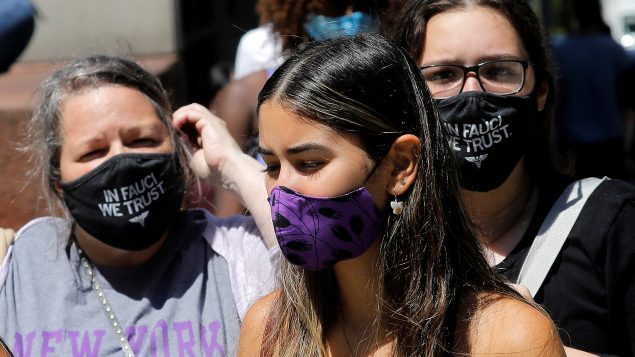 Two women wear “In Fauci We Trust” protective masks referring to Dr. Anthony Fauci, director of the U.S. National Institute for Allergy and Infectious Diseases, as they wait in line at a testing site for COVID-19 set up for returning students, faculty and staff on the main New York University (NYU) campus in Manhattan, New York City, New York, U.S., August 18.
(REUTERS/Mike Segar)

“Right now, the entire planet is in trouble,” said Fauci, the director of the U.S. National Institute for Allergy and Infectious Diseases (NIAID).

“If you look at almost every country, there are very few exceptions.

“Canada, which was supposedly doing so well, is also getting into trouble. There’s a lot of community spread.”

Fauci said the virus is primarily spreading at the “household level” among smaller groups of people who may not even know they’re infected–something to be vigilant about as and colder months approach.

“We’ve got to be able to test widely in the community for asymptomatic spreaders of the infection,” he said.

“If you just test people who are symptomatic, you’re going to miss a very large contingent of the spread of infection in the community.”

The CBC’s Adam Miller reports that Fauci was “surprised” by Pfizer and Moderna’s early vaccine trial results, which showed over 90 per cent effectiveness, but said it’s not yet “time to celebrate.” 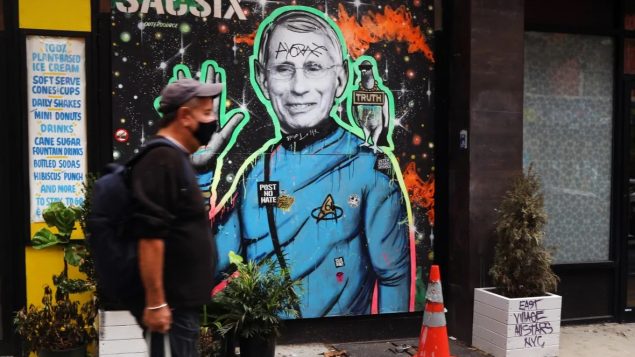 As he endured verbal attacks from Donald Trump, Fauci has remained the face of the U.S. response to the COVID-19 pandemic, as demonstrated by this mural of him in New York City. (GETTY IMAGES/Spencer Platt)

“I would have been extremely happy if this were a 75 per cent effective vaccine. I had an aspiration that it would be higher than that … but quite frankly, I did not expect it,” he said.

“It’s extraordinary to have two vaccines using a novel platform that had never before been used in an approved vaccine to have an efficacy so high.”

Fauci said that despite what he called a “major advance” in developing two highly effective vaccines in such a short period of time, people should not “put down their guard” in the coming months.

“I would hope that it would be an incentive to double down even more with the classical and simple public health measures,” he said, referring to wearing a mask, avoiding crowds, keeping physical distance, increasing ventilation and washing hands frequently.

“Those are very simple things that can go a long way in blunting the surges that we’re seeing right now.”

Miller writes that Fauci is “hopeful that people with no underlying medical conditions would be vaccinated against COVID-19 by mid-2021 but stressed that countries cannot ‘abandon public health measures’ until then.”

“That would be a disaster,” he said. “I see the vaccine as ‘help is on the way,’ and it’s the light at the end of the tunnel– but we still have a long way to go.”

Meanwhile, the fight against the spread of virus, which shows no signs of letting up across most of Canada, continues.

A CBC News tally of deaths based on provincial reports, regional health information and CBC’s reporting stood at 11,153.

In perhaps the most striking turn, the northern territory of Nunavut, which–until Nov. 6–remained the only province or territory in Canada that had not recorded a confirmed case of COVID-19, announced 10 more cases of COVID-19, bringing the territory’s total to 70 cases Wednesday morning.

That’s double what the territory reported on Monday and authorities instituted a two-week lockdown to fight the spread of the virus.

Premier Joe Savikataaq, who made the announcement, appealed to his fellow residents to follow the rules, and reach out for help if they are struggling.

Savikataaq told CBC’s Power & Politics on Tuesday evening that “no one has been hospitalized, to the best of my knowledge, so far.”

There have been 15 COVID-19 cases in the N.W.T since the start of the pandemic.

In Yukon, health officials reported one new COVID-19 case, bringing the number of cases reported in the territory to 25.

To the south, the number of cases continued to mount.

Quebec reported 1,179 new cases of COVID-19 and 35 more deaths on Wednesday, bringing the total number of people who have died in the province because of COVID-19 to 6,710.

Ontario Health Minister Christine Elliott announced an additional 1,417 cases of COVID-19 on Wednesday, as well as 32 more deaths linked to the illness– bringing the cumulative death toll in Ontario to 3,415.

Across the Prairies, Manitoba’s chief public health officer, Dr. Brent Roussin, said the province may expand the school winter break for an additional two weeks–the equivalent to a full COVID-19 incubation period to try to slow the spread of the virus.

The province reported 270 new cases of COVID-19 and seven new deaths on Tuesday.

Saskatchewan announced new COVID-19 restrictions Tuesday, including expanding its mask mandate for indoor public spaces to include the entire province.

The announcement came as officials reported 240 new cases of COVID-19, pushing the total of active cases in the province to 2,055.

The number of Saskatchewan residents who have died from the virusn stands at 31.

In Alberta, concerns were growing about the devastating toll COVID-19 is once again taking on Alberta’s care homes.

As of Wednesday morning there were 102 active outbreaks at continuing care facilities in the province and 375 active cases, according to a spokesperson for Alberta Health. 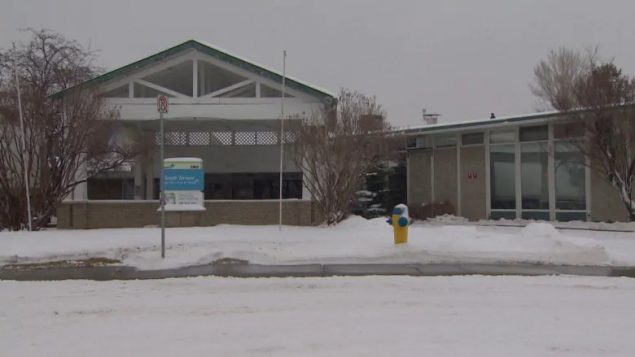 As of Wednesday morning, 16 residents had died after contracting COVID-19 at the South Terrace Continuing Care Centre in Edmonton. (Peter Evans/CBC)

A total of 2,702 cases have been confirmed at continuing care facilities in the province, and 296 residents have died.

There have been a total of 432 deaths in Alberta since the start of the pandemic.

Provincial Health Officer Dr. Bonnie Henry and Health Minister Adrian Dix saying there are 6,589 active cases of people infected with the disease. and said 198 people were in hospital, with 63 in intensive care.

The numbers marked the highest single-day totals for new cases and deaths, the greatest number of people in hospital and the heaviest active caseload to date. 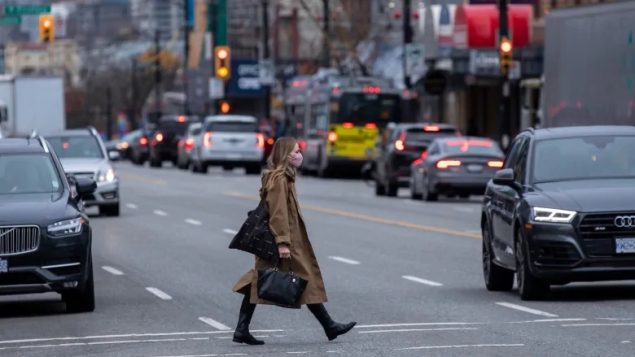 A woman in a mask crosses the street in the South Granville neighbourhood of Vancouver on Monday. (Ben Nelms/CBC)

The latest deaths brought the provincial death toll to 310.

Across Atlantic Canada, which has closed itself off to and from outside travel for much of the year, New Brunswick reported four new cases of COVID-19 on Tuesday.

The province has reported six deaths since the start of the pandemic.

No new cases on Tuesday in Prince Edward Island, where there have been no deaths from COVID-19, but officials said that the province will be introducing a mask mandate for indoor public spaces.

Meanwhile, Newfoundland and Labrador, where a total of four people have died from the coronavirus, officials reported two new cases on Tuesday.

The province has suffered 65 deaths as a result of COVID-19.