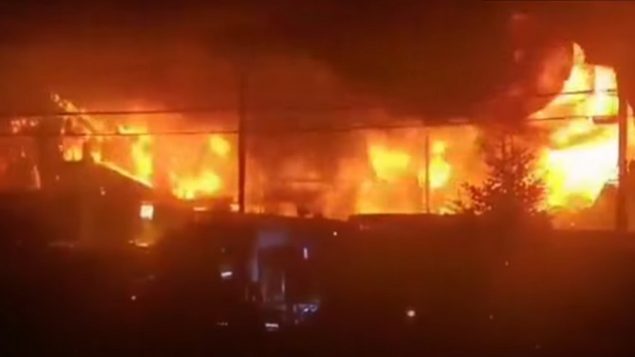 In mid October during the dispute, a lobster facility where Mk'kmaw had been storing their catch, burned down in a suspicious fire. (via CBC)

The ongoing dispute between Indigenous and non-native lobster fishers could get tense once again.

Last weekend, and on Wednesday, agents from Fisheries and Oceans Canada (DFO) seized hundreds of Indigenous lobster traps, ostensibly because the traps were set before the season opens on Monday..

An Indigenous  Sipekne’katik  Mi’kmaw group of fishers say they have the inherent right to fish when they want, while local commercial fishers say there is a closed season for conservation reasons, and that off-season fishing is illegal and could harm the stocks. 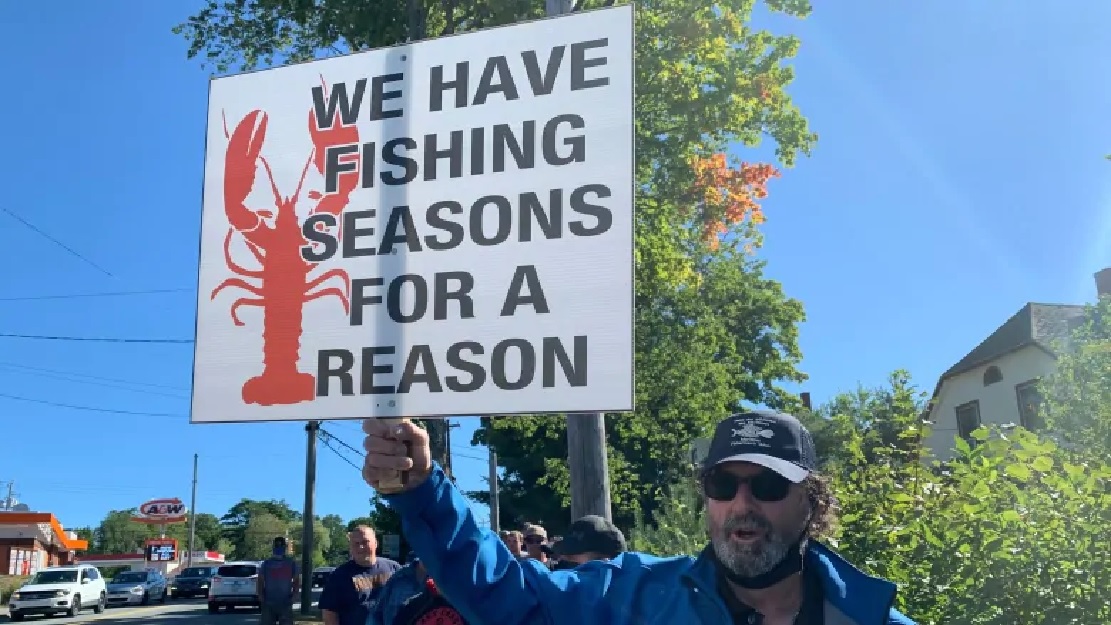 Local commercial fishers have been upset for years at what they claim is illegal fishing by Indigenous groups, beyond the permitted, food, and ceremonial rights. . ( Paul Withers, CBC)

The dispute has already seen angry mobs of Indigenous and local commercial fishers face off, mostly with shouting and insults. However, a lobster holding company used by Mi’kmaw burned down under suspicious circumstances, a truck was burned, traps damaged and at least one charge of assault laid.

The issue hinges on a Supreme Court of Canada  (SCC)  ‘Marshall’ decision in 1999 which held that Indigenous peoples had the right to hunt and fish to earn a ‘moderate livelihood” based on treaties signed with the Crown in the1700’s.  What constitutes a ‘moderate livelihood’ however has never been defined. A second ruling however said the right was not absolute and could be subject to government regulation for conservation reasons.

DFO officials confirmed that some of the traps removed this week were marked as ‘moderate livelihood’, and are now trying to confirm ownership of those traps.

Quoted by the CBC, Todd Somerville, director of conservation and protection for the Maritimes said traps were seized for a variety of reasons, “Untagged gear, improperly configured gear, gear that hadn’t been tended in a while. There was gear where dead lobsters were found. Over 6,000 lobsters, live lobsters, were returned to the waters as well”. 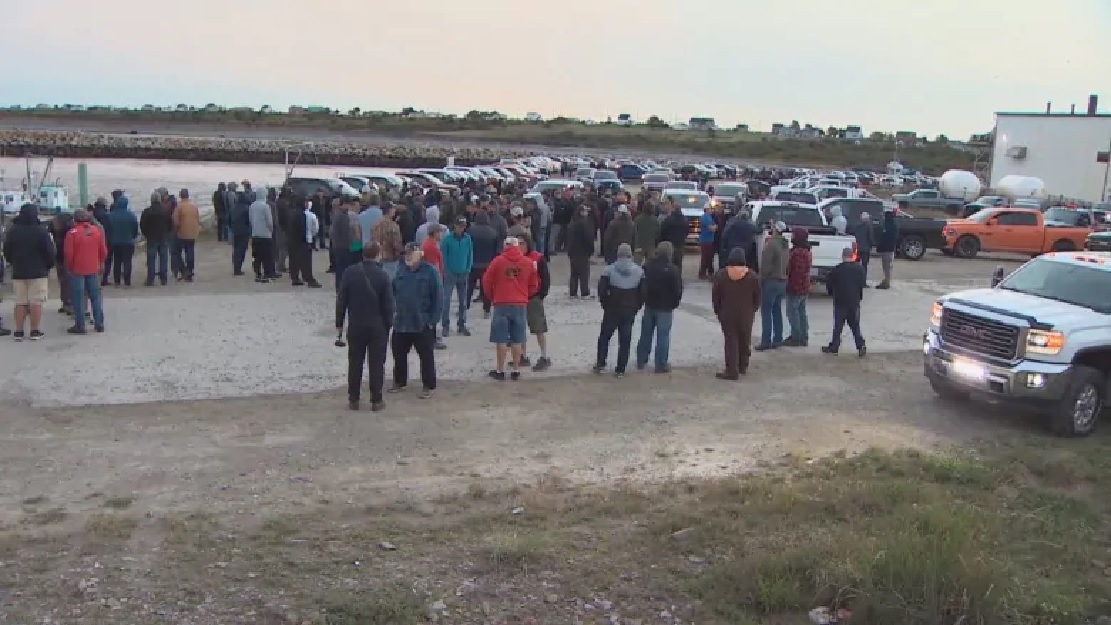 Somerville noted however that not all traps were seized and several identified as  ‘food, social and ceremonial’ were returned to the water. Band members are legally allowed three such traps each.

The officially regulated season opens on Monday in St. Mary’s Bay in southwestern Nova Scotia, when commercial boats will set out to lay thousands of traps on “dumping day’.

In response to the DFO seizures, Sipekne’katik Chief Mike Sack was quoted in the Canadian Press saying, “Dumping Day is going to be about 400,000 traps that our people get to pick from to replenish our traps,”

Negotiations between Chief Sack and federal Fisheries Minister Bernadette Jordan have been ongoing towards developing a definition of moderate livelihood  The DFO actions have disrupted that according to Sack who said he phoned the minister and, “I told her what I thought and hung up. They need to leave our gear alone; they’re infringing on our rights and it isn’t going to end here”. 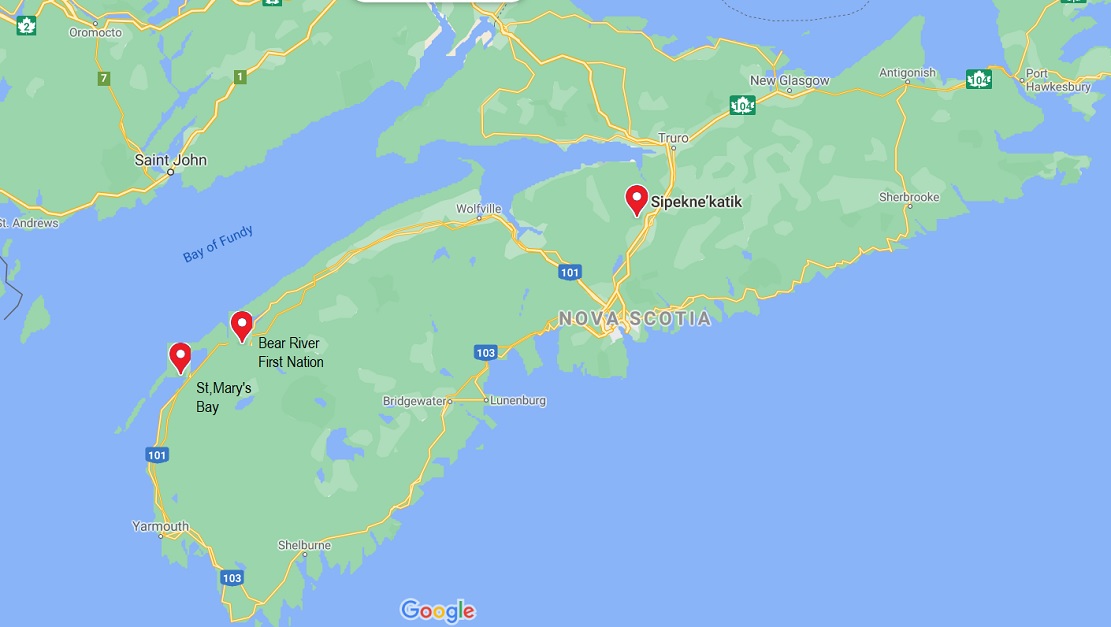 The dispute over fishing rights has been on an off over two decades. Red balloon indicates Saulnierville on St Mary’s Bay, N.S. where the latest flare up is occurring, part of the federally regulated lobster fishing area 34. St Mary’s Bay is one of the most lucrative lobster areas in the maritimes. The Sipetne’katik are based in central Nova Scotia( (
google maps)

Since the Sipekne’katik announced in September they were starting their own ‘self-regulated’ fishery outside federal rules, several other Indigenous groups said they would follow suit based on the SCC ‘Marshall’ decision in 1999

Commercial fishers have been complaining since 2017 about ‘off season’ fishing which they say has diminished the stock, a claim which has been disputed by authorities.