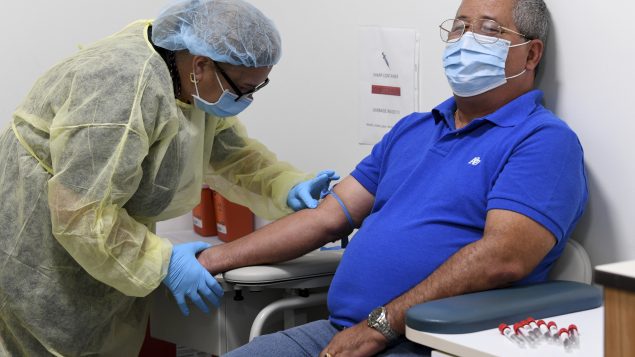 University of Miami Miller School of Medicine phlebotomist Mayra Fernandez prepares to take a blood sample from study participant Julio Li, on Sept. 2, in Miami., Florida. Miami was one of 89 cities around the U.S. that's tested the Moderna COVID-19 vaccine, which is expected to be available in Canada shortly. (AP Photo/Taimy Alvarez)

Prime Minister Justin Trudeau said today that the Moderna COVID-19 vaccine will be available in Canada by the end of the month–if it passes regulatory muster.

If it is approved, the prime minister said, Canada will receive up to 168,000 doses before the end of December.

“As with the early shipments of the Pfizer vaccine, this moves us even further forward on getting Canadians protected as quickly as possible,” Trudeau said.

“We are very, very well positioned.”

His announcement followed comments by Health Canada’s chief medical adviser on Monday that the country was on track to approve Moderna’s vaccine soon–though Dr. Supriya Sharma provided no hard date.

Sharma told reporters that Moderna provided the final clinical data on Friday to Health Canada, which has been reviewing the company’s vaccine since October. 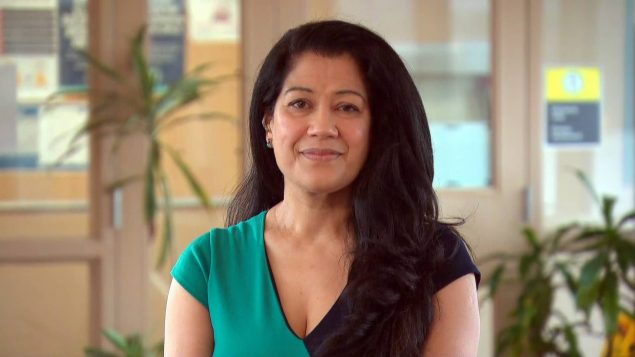 Health Canada’s chief medical advisor, Dr. Supriya Sharma, who is at the centre of the vaccine approval process, says Canadians will soon have access to Moderna’s vaccine. (CBC News)

All that’s left now, she said, is data on the manufacturing plants, which the department expects to receive by the end of the week.

Canada, which already has enough vaccines secured to protect a population four times its size–the most of any country in the world–ordered an additional 20 million doses from Moderna earlier this month, bringing its confirmed order commitment to 40 million doses from the Massachusetts-based pharmaceutical giant.

Vaccinations are scheduled today at a long-term facility in Ottawa and in Manitoba and Alberta tomorrow.

Procurement Minister Anita Anand said Monday she anticipates receiving 30,000 Pfizer-BioNTech doses both this week and next.

The federal government has said about 249,000 doses will arrive by the end of the month. 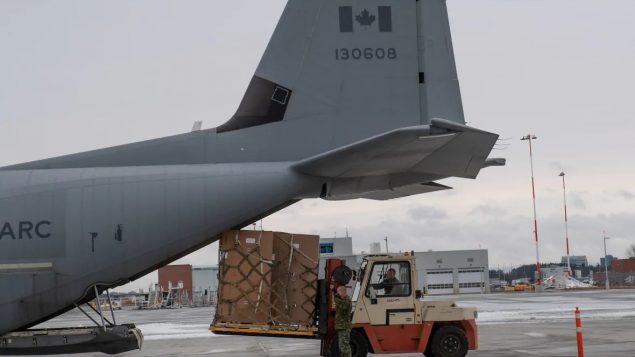 Special freezers for COVID-19 for Pfizer-BioNTech vaccines are loaded onto a transport aircraft in Ottawa on Saturday. (Matthew Tower/Canadian Forces Combat Camera/Canadian Armed Forces via Reuters)

However, the Pfizer-BioNTech vaccine must be stored at temperatures below -70C while Moderna’s stays stable at -20C for up to six months.

Pfizer and Moderna together are expected to deliver 60 million doses of vaccine to Canada by next fall.

Ottawa has signed deals with seven pharmaceutical companies to deliver millions of doses at a cost of $1 billion.

Sharma said Monday Health Canada was still reviewing AstraZeneca’s application after the company realized some patients in its clinical trial had not been given full doses of the vaccine.

She said Johnson & Johnson only submitted its application two weeks ago for Canadian approval and the teams are now conducting preliminary reviews.

Both the Pfizer-BioNTech and Moderna vaccines use messenger RNA technology, or mRNA, which directs cells in the body to make proteins to prevent or fight disease.

The U.S. Food and Drug Administration is expected to approve the use of the Moderna vaccine this Friday.