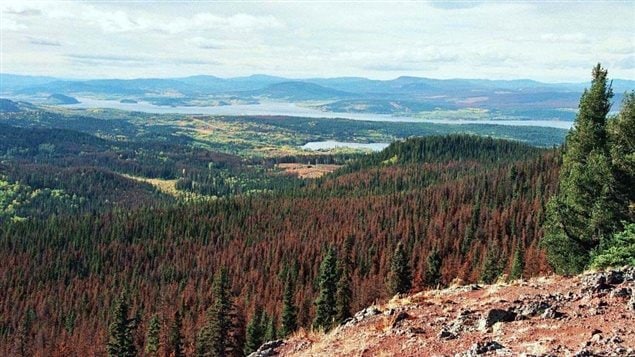 Unusually dry weather is suspected to have led to the massive invasion of mountain pine beetles which have destroyed millions of hectares of forest in western Canada and the U.S.
Photo Credit: Themightyquill, copyright cc-by-sa-3.0

Drought is worsening in much of western Canada and that is making trees more vulnerable to insects. In 2014, the mountain pine beetle destroyed 18.1 million hectares of pine forest in the western province of British Columbia and is expanding eastward. Other insects are already invading forests in dry areas such as the Douglas-fir beetled, the western spruce budworm, and the spruce beetle.

Insects can ‘hear or smell a stressed tree’

“Insects have evolved to have sensory organs that can either hear or smell a stressed tree,” says Prof. Sandy Smith, an entomologist at the University of Toronto. Trees emit substances when under stress and when they are severely short of water, their plant cells may collapse emitting a popping sound. When insects detect these they attack.

Trees have defense mechanisms to repel insects. They can eject them by mobilizing sap or they may produce toxins. But these mechanisms depend on water, and when it’s scarce they are more vulnerable.

It then becomes a numbers game. The more insects invade a tree, the more trees get invaded. Eventually the population can become so large that even healthy trees have difficulty repelling attacks.

The boreal forest that stretches across much of Canada is normally wet. Snow falls in winter, then melts, leaving behind moisture for the trees. But conditions are changing. “Because we’re facing climate change and we have these very hot dry periods, insects are attuned to all of these conditions. Trees, certainly in those areas that are experiencing drought, are very susceptible,” says Smith.

Boreal forest important to the world