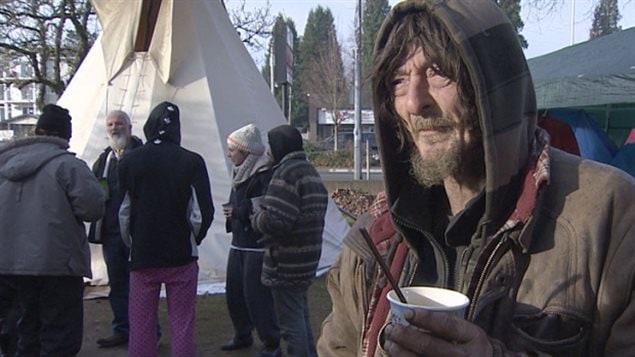 Residents at the homeless protest camp in Jubilee Park in 2014 refused to leave, despite threats of an injunction from the City of Abbotsford.
Photo Credit: CBC

Homeless people in Canada won a major legal victory on Wednesday, a decision that maybe–just maybe–will make them a whole lot less invisible, a whole lot less the objects of scorn by so many.

Citing Canada’s Charter of Rights and Freedoms, the B.C. Supreme Court ruled that homeless residents in a tent city in the Lower Mainland city of Abbotsford can erect shelters between 7 p.m. and 9 a.m. the following morning.

Citing Section 7 of the Charter, Chief Justice Christopher Hinkson ruled that the homeless–like other Canadians–are entitled to the right of personal security–a precedent that likely have far-reaching effects across the country.

The lawsuit on behalf of the Abbotsford homeless was filed by the B.C./Yukon Association of Drug War Survivors with the help of the Pivot Legal Society after city workers spread chicken manure on one homeless camp, and police pepper-sprayed residents and slashed tents at another in 2013.

Abbotsford Mayor Bruce Banman apologized for the incident, but said the camps were a safety issue and had to removed.

​ At a hearing this summer, Abbotsford’s lawyers told the court that the local homeless population chooses to sleep outside rather than in available shelters, while the Pivot Legal Society argued it’s wrong to blame the homeless for their circumstances and that displacing them did more harm than good.

D.J. Larkin of the Pivot Legal Society says the judgement means bylaws across the country that criminalize people on the street are not constitutional.

She spoke to RCI by phone Thursday from the Vancouver court house.