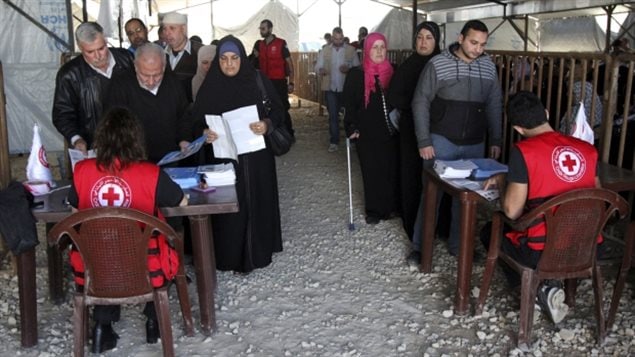 Syrian refugees line up to receive aid for the winter from the UN Refugee Agency in Tripoli, northern Lebanon. Canada has dispatched 500 officials to help speed the selection process for the eventual 25,000 to be selected for Canada
Photo Credit: Omar Ibrahim/Reuter via CBC

During Canada’s recent federal election campaign, the crisis of migrants and refugees rushinginto Europe from Africa and the Middle-East was in full flood.

Aid agencies were calling for the then-Conservative government to speed up the process of bringing refugees to settle in Canada.
The Conservatives under Stephen Harper adopted a –go-slow approach saying careful vetting for security reasons was needed in spite of the crisis.

Liberal leader Justin Trudeau, now Prime Minister, had promised to rush in 25,000 Syrian refugees by January 1st.
Christina Clark-Kazak (PhD) is an expert in issues surrounding refugees. After working with the Canadian government overseas, she is now the Acting Director of York’s Centre for Refugee Studies, and associate principal, research and graduate studies, Department of International Studies, at York University and Glendon Campus Toronto

After much public criticism of the plans to rush in the Syrian refugees, the new Liberal government announced it would be unable to meet it’s promise.
Many Canadians, rightly ore wrongly, were concerned about security issues especially following the Beirut bombing and Paris attacks.
Others were concerned at the projected costs, which have varied but which the government has said at one point would be $1.2 billion over six years.
The government at this point has only budgeted $100-million for the refugee effort.
This week the government announced it had adjusted it’s original promise to say only 10,000 Syrians will be brought in by the end of the year with the remainder coming in the following two months.
To accomplish even this, it has rushed some 500 of its officials to refugee camps Jordan, Lebanon and Turkey to help screen potential candidates.

Another possibly contentious issue is who is being selected.

This week the government announced only women, children, and families would be allowed in, along with gay men and women. The idea is that these are the most vulnerable categories to violence and abuse.  Prime Minister Trudeau has said that security concerns were behind the modifications, but critics say elimination of single men only underscores the idea that Muslim men are security threats.

Professor Clark-Kazak notes that several experts have said that both these aspects stereotype groups, and as for claims of homosexuality, raises other concerns.

Determination involves detailed and intimate revelations about people’s lives, and on the one hand there could be abuse- people claiming to be gay to get in- there is also a heterosexual bias on the part of interviewers,, and that in middle-eastern cultures, homosexuality will have been repressed and many will have outwardly living heterosexual lives. Professor Clark Kazak said the government’s “category” approach to vulnerability exacerbates such issues.

To accommodate the influx, several military bases across the country have been busy upgrading a number of facilities on base to render them suitable for large numbers of women and children, and families. Most of the available barracks were intended for summer use only and so are also being modified for winter conditions.