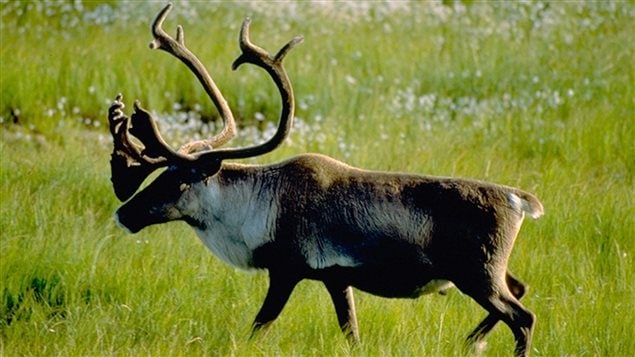 The woodland caribou has been the symbol on the Canadian .25.ccent piece since 1936 and is an official symbol of the province of Newfoundland and Labrador
Photo Credit: Canadian Press, via CBC

For years, various levels of governments across Canada have been well aware of serious declines in the caribou populations.

In spite of a variety of programmes and hunting restrictions, the populations continue to decline. Some of those programmes however have brought their own criticisms, such as wolf culls to cut down on predation.

In its third annual report, the Canadian Parks and Wilderness Society (CPAWS) says that actions by provincial governments in Canada to provide protection and recovery have been “spotty” and too few are showing leadership.

The species known as Woodland Caribou inhabit the boreal forest, a wide ribbon-like area that stretches across  the central portion of Canada from Yukon to Newfoundland.

The report shows some progressive efforts in the prairie provinces of Manitoba and Saskatchewan. It also indicates there have been some positive signs from the new provincial government in Alberta in terms of habitat conservation where energy exploration leases have been halted in caribou habitat in that province.  However, other provinces were given mixed reviews, with criticism for Ontario and British Columbia.

Anna Baggio is the Director, Conservation Planning for CPAWS Wildlands League, the Ontario chapter working on large scale wilderness.  In a press release today, she says, “In Ontario, we are deeply concerned that the situation for boreal caribou has not improved in the past 12 months. We’ve had six years of promises and talking from Ontario and not one hectare set aside for caribou habitat protection”.

Boreal Caribou occupy about 2.4 million km2 of Canada’s boreal forest – less than half of their North American range in the 19th century.

According to CPAWS the boreal woodland caribou in Ontario have lost between 40 to 50% of their original range, and is now considered a “threatened” species under both Ontario’s  Endangered Species  Act and under the federal Species at Risk Act.

“Caribou are still largely unprotected. The habitat has been protected one per cent more than the previous year,” said Eric Hebert-Daly, CPAWS executive director.

The biggest threat to their survival is habitat fragmentation, which increases access by predators. This often comes in the form of forestry, which clear cuts vast swaths of forests leaving a patchwork, and breaking up the contiguous forest. Mineral extraction operations create noise and disturbance which stress the animals, while access roads for both types of industries also fragment the forest.

Scientists consider boreal caribou as bellwethers of the health of the boreal forest, which also cleanses our air and water and stores vast amounts of carbon within its soils, moderating climate change.