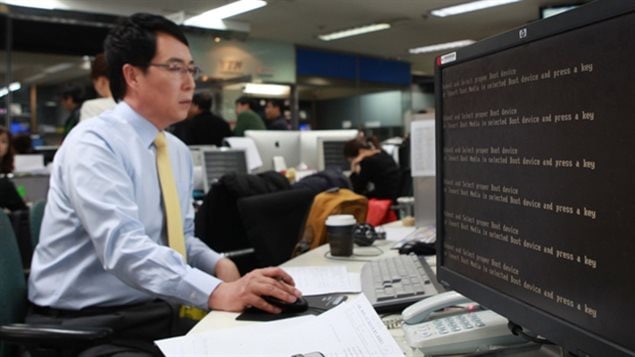 Many work situations now require staring at computer screens for hours at a time. Concern is that the blue light wavelength projected may be harmful to your eyes, but studies-so far- are not conclusive.
Photo Credit: Yonhap/Associated Press via CBC

Electronics-screen time: harmful to eyesight? Or not?

Electronic devices now dominate our lives. At work we might spend several hours staring at the screen, at other times we’re staring at mobile phone screens, and laptops and tablet screens. And then of course there are television screens as well.

A new American study by the “Vision Council” says even a couple of hours a day staring at a computer screen can strain your eyes.  Electronic screens give off a particular blue-violet light frequency which some say not only strains the eyes, but may cause damage to both children and older people in the back of the eyes.

The report says some 65 percent of the people surveyed reported “digital” eye strain, with the highest percentage among adults under age 30.

Quoted by Global news, an Edmonton optometrist Dr Sarah Keep says, “It’s something that we see on a daily basis. Patients come in all the time and they have certain symptoms that are linked to computer use,” she explained. “We see anything from dry eye issues, to issues with head and neck pain, blurry vision.”

However, a recent British study does not agree that screen time is damaging.

In a Reuters story, John O’Hagan, lead author of the study and head of the Laser and Optical Radiation Dosimetry Group of Public Health England in Chilton, U.K. says, “Even under extreme long-term viewing conditions, none of the low energy light bulbs, computers, tablets and mobile phones we assessed suggested cause for concern for public health”

The report notes that electronic devices and LED lights emit a short wavelength blue light which is known to damage retinas.

However, O’Hagen and his team measured the blue light from several devices and found it to be less than that of natural light.

The report also says that even if looking at a screen for hours, it is still unlikely to cause damage to the retina.

Adding another aspect to the debate, another scientist, Meenu light spectrum researcher at the National Tsing Hua University in Hsinchu, Taiwan, told Reuters Health  says that he is still concerned about blue light, especially as more people spend more time on electronic devices.

Many stories on line seem to agree with the position that too much screen time, is likely to cause eye strain and “may” cause damage.

If you are concerned about exposure, a possible solution is getting glasses with blue-light blocking lens filters.