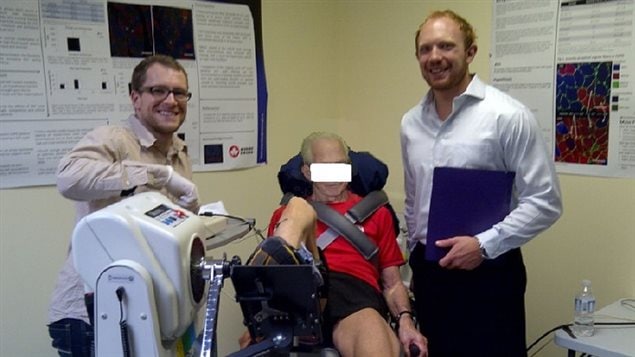 Keeping strong, keeping muscle: Elderly world-class athletes- is it exercise or genetics or both?

As we age we start losing abilities. We lose brain cells for example, but also motor neural cells, meaning we start to lose muscle strength.

Lead author of the research paper is Geoff Power (PhD) who is now an assistant professor in the Department of Human Health & Nutritional Sciences, College of Biological Science at the University of Guelph in Ontario.

While an earlier study showed that “masters” athletes in their 60’s showed a retention of these muscle motor units compared to non-athletes, during the period from age 60 to 80  everyone shows a  very marked decline in the number of motor units lost and subsequent muscle mass decline.

However, the athletes (men and women) who continued rigourous training into their 80s continued to show retention of motor units ( or a lessened degree of loss) when compared to the age-match control group.

The research was published recently in the Journal of  Applied Physiology, under the title, “Motor Unit Number and Transmission Stability in Octengenarioan World-class Athletes: Can age-related deficits be outrun?”

The study found that athletes’ legs were 25 percent stronger on average and had about 14 percent more total muscle mass.  In addition, the athletes had nearly one-third more motor units in their leg muscles than non-athletes.

Power notes that in active athletes even though the motor unit may die off through a normal ageing process, others nearby may grow new nerve sprouts to take over the responsibility to activate the now “orphan” muscle of the missing motor unit. This keeps the muscle active and prevents loss of muscle mass. However, once past age 60 (more or less) even active athletes cannot recover or take over for the higher number of lost motor units and muscle mass is lost.

That said, Power notes that they cannot determine at this point a clear cause and effect relationship between exercise and retention of motor units and muscle tissue. He says it may also be a case of genetics which has kept enabled these individuals to remain active at a high level, or it may be some combination of genetics and exercise.

He says at this point, it also is not clear if one takes up strenuous training as an adult prior to beginning to lose motor units, that a higher percentage of those units will be kept into later life.

What is clear however, is that even when there is muscle mass loss, under rigourous training, the remaining muscle gets bigger and stronger and takes over from the tissue lost.

Research will continue into getting a clearer idea of the role of genetics, and also into the question of whether taking up rigorous exercise past a certain age, will or won’t provide preservation of motor units.

The research was carried out with colleague Matti Allen (PhD), as a part of a larger age related study under principle investigator Tanja Taivassalo at McGill University in Montreal.