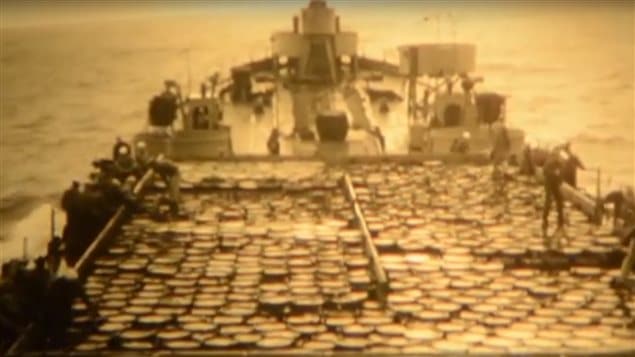 November 1959, USS Calhoun County left the naval pier in New Jersey to dump hundreds of barrels of atomic waste into the ocean about 160km offshore.
Photo Credit: US Department of Defense film- YouTube

The silent killers on the ocean floor

Around the world thousands of tons of munitions lie rusting on the ocean floor. They consist of both explosives and chemical weapons. As the metal rusts away, the toxic chemicals are exposed causing an environmental wasteland around them.

Terrence Long is chairman of the International Dialogue on Underwater Munitions,(IDUM) a Canadian and Dutch-based NGO.

Long says the leaking munitions on the seafloor have already been affecting marine life and it will only get worse.

He was involved in the first weapons identification programme called the Search and Assessment of Chemical Weapons Baltic Sea (CHEMSEA), a three‐year investigation in the Baltic Sea

In exploration of many sites where leakage has occurred, he said there was no life at all on the ocean floor. He says fish caught near such sites often displayed cancers on the skin or internally.

The research also found young fish to be less successful in reproducing thus preventing fish such as cod from proliferating and thereby contributing to a decline in stocks.

The second chemical weapons program, is on‐going with NATO Science for Peace and Security (SPS) Towards the Monitoring of Dumped Munitions (MODUM), that employs new and emerging technologies to detect, map, investigate, sample, and analyze chemical weapons and warfare materials.

The third chemical and conventional weapons program, started recently “Decision Aid for Marine Munitions” (DAIMON) aims to increase the knowledge base to evaluate risks and benefits of various management options for the assessment of how dumped ammunition impacts ecosystem, maritime activities, and humans as seafood consumers. Long is currently speaking to members of the Atlanta-base US Centre for Disease Control (CDC) about human health risks associated with dumped munitions.

Long is also currently involved in the NATO Science for Peace and Security (SPS) Summer School for Young Sciences on Sea Dumped chemical Weapons in Halifax.

In spite of these programmes, Long says it’s not nearly enough of an effort to deal with a massive worldwide problem. He would like to see the United Nations get behind the idea and propose a large scale international effort.

Long says with literally tens of thousands, if not millions, of tonnes of munitions rusting on the ocean floor, the potential for a slow but steady marine catastrophe is a very real and very present danger.