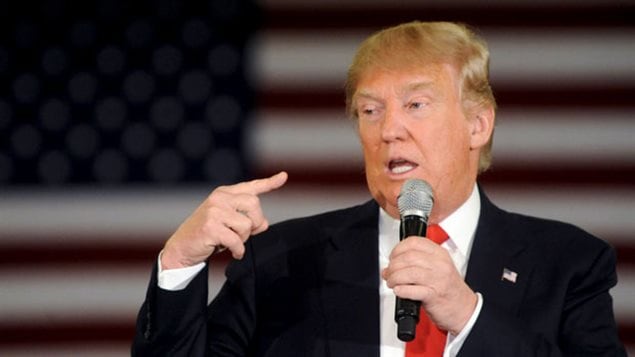 Donald Trump, originally thought to have little chance, went outside typical Republican base and is now set to be the party’s presidential candidate
Photo Credit: via CBC

Why no political ‘left’, or Labour Party, in the USA?

Many countries around the world have a multi-party system, such as Canada and as such allow for a political spectrum

The United States seems to be locked into a two party system.  A Canadian analyst says that wasn’t always the case and it doesn’t have to be the case.

Barry Eidlin (PhD), is an assistant professor of sociology at McGill University in Montreal

The U.S. and Canada are neighbours but with vastly different political systems.

Professor Eidlin says Canada’s multi-party system which has a fairly strong labour party has prevented Canada from drifting as far to the right as in the U.S. The lack of a ‘socialist’ party in the U.S could also be said to have created somewhat wider economic-level divisions in that society compared to Canada where several social safety-net and health-care programmes are in place, mostly as a result of the existence of such a party. While the Liberals and Conservative in Canada have alternated as the ruling parties, the existence of the others has been a mitigating force on them, and led to certain socialist policies.

Presidential hopeful Bernie Sanders calls himself a democratic socialist but is a candidate for the “establishment” Democrats.

If he was in Canada or elsewhere, he would probably be the leader of our own New Democratic Party, a labour party. But there’s no such entity in the U.S.

Commenting on his analysis which was just published in the American Sociological Review Eidlin said, “The conventional wisdom holds that the U.S. lacks a labour or socialist party because its political culture is hostile to socialism, and its electoral system is uniquely hostile to third parties.”

In his analysis of almost 150 years of electoral data, Eidlin says there was low but significant labour party support from the mid-1800’s and following the First World War in both countries up until about the 1930’s.

Then, with the unrest of labour and farmers in the Great Depression, Franklin Roosevelt in the U.S expressed concern for the “forgotten man” and created his ‘New Deal’ coalition which absorbed much of that labour unrest, while creating divisions among the rest. This led to a collapse of labour as a separate political party possibility from which it never recovered.

Canada’s established political parties reacted differently to Depression-era farmer and labour unrest; with indifference and/or repression. A farm lobby group was created to push for reforms. It later became a political entity called the United Farmers of Alberta was formed and governed in that western province from 1921-1935, instituting a number of reforms.

The continued push for more social reforms, being ignored in other provinces and on the federal level then resulted in the creation of the Co-operative Commonwealth Federation (CCF) in 1932, a coalition of farm, socialist and local Alberta labour groups.   While labour elsewhere in the country remained sceptical for many years, wartime turmoil pushed it to ally with the CCF in 1943. In 1944 the CCF won the provincial election in Saskatchewan becoming the first defined social-democratic government in North America.

The ties with labour became cemented when the Canadian Labour Congress, the national labour movement organization, threw its support behind the CCF to create a new political entity in 1961 becoming the New Democratic Party, which although never elected to govern,  has even since become an important and influential third party in the Canadian system.

“What’s really interesting here is the paradoxical role that the ruling parties play in both countries,” Eidlin says. “In the U.S., the Democrat’s more conciliatory response to farmer and labour protest ended up constraining progressive politics over the long term. Meanwhile, the Canadian Liberals and Conservatives’ efforts to suppress farmer and labour protest backfired, setting the stage for the relatively more progressive political landscape we take for granted today”.

He says also that unlike many political systems which reflect voter concerns through various party platforms, in the U.S. the two parties and their particular leaders, tend to set the agenda and also shape debate.

Professor Eidlin notes that nothing theoretically prevents a third party, or more, in the U.S.  and that limitations being shown now in the two-party system and the respective candidates, may lead to enough concern that at some point in the future built-up frustration may result in another political party option being created.