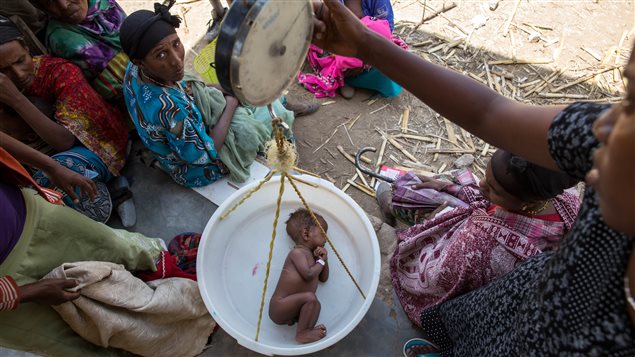 A baby boy sleeps while being weighed in a sling-scale during a nutrition screening at the UNICEF-supported community health post in Arago Nemano Kabele, Shalla Woreda, West Arsi Zone, on Feb. 11, 2016 in Ethiopia.
Photo Credit: UNICEF/UN011586/Ayene

UNICEF warns of children’s suffering due to El Nino

UNICEF is sounding the alarm in the aftermath of the weather phenomenon known as El Nino. Described as the “most powerful on record” this recent warming of the oceans, resulted in droughts and other weather events that wreaked havoc in many areas of the world, and most often the poorest regions.

“It’s not over – El Niño’s impact on children”

In a recent UNICEF report entitled, It’s not over – El Niño’s impact on children, the spread of Zika in South America is attributed to the radical weather. Floods created the conditions for optimum breeding grounds for mosquitos that transmit yellow fever and dengue, and chikungya and the dreaded Zika that Brazil is coping with in advance of the Olympics.

In Southern Africa, the weather extreme conditions often lead to drastic coping mechanisms, which heighten the risk of HIV transmission

David Morley, president and CEO of UNICEF Canada, says the devastation of crops left many families hungry and on the move. The children, along with being malnourished, are not in school or educational settings while families are in transition, and vulnerable to exploitation.

Morley says the growing fear now is that the La Nina phenomenon, the flip-side, will bring equally devastating rainfall, that will cause widespread flooding, and an increase in water-born diseases.

The horn of Africa, particularly Ethiopia, has been most adversely affected by drought. Morley says Ethiopia made great headway in creating social networks with community workers active in some of the most remote areas monitoring the health of families. Morley says it’s now evident that six million children in Ethiopia are now in need.

While UNICEF contributes in many areas, including cash transfers to the poorest families, he says the combined efforts of aid agencies and governments, to improve planting and harvesting practices is necessary. The same is true for waste disposal.

Morley reminds Canadians, that along with the valuable donations of money to aid organizations, people can let their government representatives know, that international aid is a priority for them.