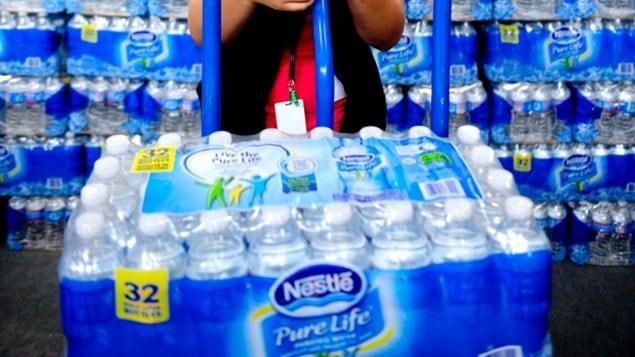 Nestle and other bottling companies make huge profits on water extracted from rivers and acquifers in Canada, Many citizens want the practice stopped, or at least face far greater controls and restrictions on water extraction
Photo Credit: Associate Press via CBC

The central province of Ontario has experienced a major heat wave and drought this summer putting a great strain on water supplies.

Indeed residents in most communities all across Canada now regularly face water usage restrictions in summer. In spite of that,transnational corporate giants like Nestle continue to draw millions of litres of water from Ontario’s ground waters to be put into plastic bottles and sold both nationally and internationally.

Many residents are now concerned that such transnational corporations are making astronomical profits from this critical resource with little benefit to local areas where the wells are located, and with potential harm to resident and farmer water supplies.

Wellington County resident Mike Nagy is a volunteer with the non-profit citizen groups Save Our Water, and Wellington Water Watchers where he is the current chair.

Nestle’s permit for extracting water in Aberfoyle expired on July 31, but the Ontario government is allowing it to continue extraction, and in spite of a drought in the province.  Environmental groups say the government did not consult people in Wellington county and they do not want the permit extended.

After paying a permit fee of $750 for low or medium risk water removal,  bottling firms like Nestle pay a token fee of a mere $3.71 per million litres of water they remove in Ontario.

In west coast British Columbia, the charge is even lower a $2.25 per million litres. Even the various ministries admit that the fees cover less than two percent of the government’s water quantity management and administrative costs.

According to a report in the Globe and Mail, among other Ontario commercial permit holders include Gold Mountain Springs at 6.1 million litres a day, Gott Enterprises at 5.8 million litres and St. Joseph Natural Spring Water at 5.5 million litres.

Environmental groups say water should be for life, and not be a profit oriented activity, and are deeply concerned about the massive removal of water, especially as climate change is affecting availability of fresh water supplies

Nagy says in the Wellington area of south central Ontario, the aquifer level is now about a metre and half lower, causing concern among farmers who draw well water for their crops and household needs

The issue of commercial water bottling is increasingly becoming a contentious one all across Canada as the bottled water industry continues to grow.

Nestle also recently purchased a well property in Elora Ontario, also in Wellington County, formerly owned by the Middlebrook Water Company with a permit to draw 1.6 million litres per day.

As a side note, environmentalists are also concerned about the massive amount of plastic waste the industry generates.