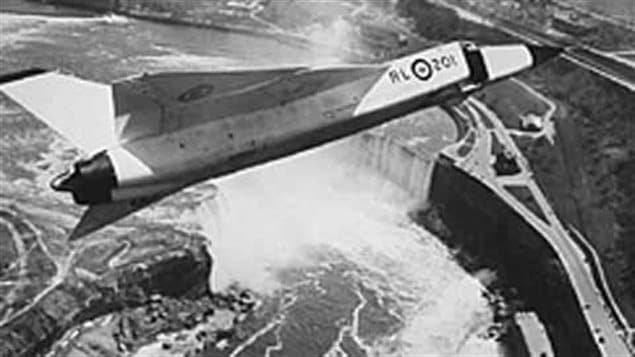 The beautiful Avro Arrow above Canada’s Niagara (Horseshoe) Falls on one of its test flights.
Photo Credit: RCAF-DND

It was truly a “black Friday”.

The date was February 20th, 1959.  It was sudden, it was unexpected, it was brutal. An announcement from Canada’s Parliament that Friday immediately affected thousands of workers at the AV Roe aerospace plant near Toronto and the repercussions have lasted ever since.

But to start at the beginning, which was 1953, the Cold War was now well-established between the West and the Communist Soviet Union.

The threat of Soviet bombers crossing the Arctic into North American airspace was very real and the Royal Canadian Air Force wanted a new and better interceptor.  However, the call for tenders “AIR 7-3”  was for a jet not just “better” than current technology but with specifications no current manufacturer thought was even possible.

A.V. Roe had been working on new fighters design including a delta wing since 1951 and now accepted this incredible 1953 challenge It began feverishly working on an entirely new concept like no fighter ever before.

In just four short years, the engineers and machinists and designers would create what was arguably the fastest and most advanced fighter jet in the world with capabilities that even against today’s fighter jets would be impressive, capable of flying faster and farther for example than the new F-35 over 50 years later.

On October 4, 1957, the CF-105 “Avro Arrow” was revealed to the public. Although stunning it should have made national headlines, and even world news, but unfortunately it was the same day that the Soviets launched Sputnik into Earth orbit which overshadowed the Arrow’s debut.

Nevertheless, the Arrow, registered as RL-201, took to the skies in March 1958 and immediately impressed its test pilots.

A few CF-105’s had been built and as test flights continued, they repeatedly showed astounding potential using existing engines. That potential was expected to increase greatly with the almost completed and better performing Canadian-designed Orenda Iroquois engine.

Test pilots loved the plane, and chief test pilot Jan Zurakowski said it was the best plane he’d ever flown.

The Arrow could go from idle on the runway, to Mach 0.92 in just 90 seconds, and operating from its own hanger, be completely refueled and rearmed in just six minutes.

It was also the world’s first “fly-by-wire” technology.

At the time, it should be noted that breaking the sound barrier (Mach-1) had only begun to be achieved by fighter jets in level flight by about the mid 1950’s

The new Arrow (RL-201) reached Mach-1 with its “current technology” Pratt and Whitney J75  engines during a steep climb on its third flight. The rate of climb was over 38,000 ft/min while it was estimated with the much better Canadian Orenda would be over 44,000 ft/min.

It seemed Canada had left the world’s leading jet manufacturers wobbling far behind in the Arrow’s jet stream.

It was on this day that Canada’s then Prime Minister John Diefenbaker, rose in Parliament and announced the sudden halt to the CF-105 Avro Arrow jet fighter and Orenda- Iroquois engine programmes, effective immediately.  This was allegedly due to increasing costs overruns, mostly due to the RCAF upper echelons  which kept changing specifications and requirements.

There was also the possibly self-serving issue of the American counterpart to our Defence Minister George R. Pearkes, who told Pearkes that Canada didn’t need to be building aircraft because the US had lots of fighters and could protect the skies in a crisis. With the Soviet satellite “Sputnik” venture into space, the rocket and missile race was on, leading to the attitude being tossed about that manned fighters would fade away as missile interceptors were the way of the future.

The cost overruns were due in part to the changing designs for the plane’s top of line weapons systems to be provided by the US. First designed for the Hughes/Falcon, the RCAF wanted the Sparrow/Astra system under development in the US. This required a major overhaul and redesign. When the Sparrow/Astra was cancelled, the Americans relented and agreed to give the Hughes/Falcon technology to Canada.

Many point out that the American aircraft industry had a great deal to lose if Canada’s much better interceptor reached the international market.

Then came another astounding, and unbelievable order.

Arrow RL-206 has just been built and was slated to try for the world speed and altitude records.  In what is still considered a brutal, unnecessary, highly unusual, controversial and mysterious move, the five flying Arrows, and the just finished RL-206, were ordered destroyed.  Not only all planes, but all jigs, all special tools, everything was ordered destroyed. Luckily photos and films survived, along with other documentation, and event some parts that were smuggled out as souvenirs by some of the employees.

With the announcement some 14,000 AV Roe employees lost their jobs along with an equal number in subcontracted equipment suppliers.

To this day, conspiracy theories about American involvement to end the Canadian project abound. They concern allegations that American aerospace companies did not want competition for sales from a much superior interceptor from Canada, and that they were also eager to hire away the brilliant engineers who created the Arrow.

It is true that the cancellation of the CF-105 soon caused the demise of the A.V Roe company and that many of the Canadian engineers were in fact hired by US aerospace firms and by NASA. Many design features on subsequent US fighters can be traced to the Arrow, while former A.V.Roe employees also helped develop the US space programme.

The repercussions for Canada were enormous  as the cancellation also effectively ended Canada’s likelihood of ever becoming a major and leading player in the aerospace industry.

In 1996 a three-hour miniseries about the Arrow debacle was created for the Canadian Broadcasting Corporation and starred Dan Akroyd. It is listed as having the highest viewership ever for a CBC programme.

A quick search on the internet reveals about a dozen books written on and about the Arrow, including “who killed the Arrow”,  “Fall of an Arrow”, “Cold war combat jet”,  “Revolutionary Airplane”, “the Impossible Dream” and many others.

To this day, mention of the Arrow to anyone of a certain age, or to aircraft enthusiasts  can still stir up strong emotions and debate