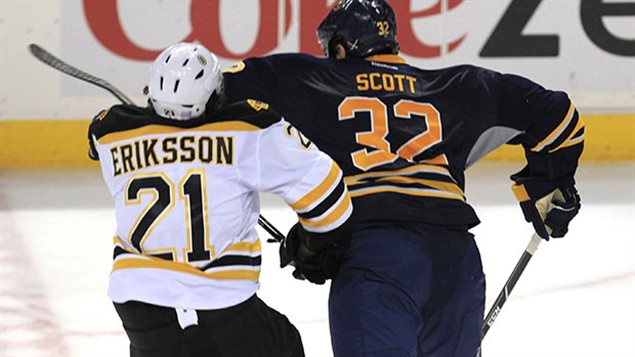 A new study shows former NHL players have a higher level of psychiatric problems than the general public and suggests a link with the number of head injuries suffered
Photo Credit: Harry Scull Jr./Buffalo News/Associated Press-via

Hockey is fast, and at times rough, especially as you rise through the ranks to the top league, the National Hockey League (NHL)

Hits have always been hard but as players have become bigger, stronger, faster, the hits have become harder, and that means more head shocks and injuries.

A new study has found a higher than average level of psychiatric disorders among former NHL players.

The study noted 59 percent of the former hockey players experienced sleep disorders, depression, substance abuse. This compares with only 19 percent of a control group who had experienced  such disorders.

The study was published in the Journal of Neurology, Neurosurgery and Psychiatry this month. (abstract HERE)

“..we’re supposed to be tough. There’s a pride in playing injured — that’s how you gain respect. Head trauma is different. It isn’t something you can shake off. Management and trainers have to step up and say, ‘No, this isn’t right; this kid can’t play.'” Scott Thornton, 17 seasons in the NHL

The study looked at 33 former NHL players aged 34 to 71 over a four year period.

While two players were found to be seriously cognitive impaired and excluded, the others were found to have little cognitive impairment. However while certain tests showed little differences with the control group in such results as response speed, and visuospatial problem solving, the study noted “reliable group differences in cognitive performance were observed on tests of executive and intellectual function; performance on these measures was associated with concussion exposure”.

Tests showed that players who suffered more concussions scored lower on intellectual function tests than those of the control group which had never played high level contact sports and no history of concussions.

Brian Levine, senior neuropsycologist at the Rotman Research Institute at the Baycrest Health Sciences centre in Toronto headed the study team.  He says he intends to follow the former players as they age in order to determine how their mental function might change.

The NHL is currently being sueed by 100 former players who say the league downplayed concussion injuries and pushed them to play again before they were fully recovered from  head injuries.