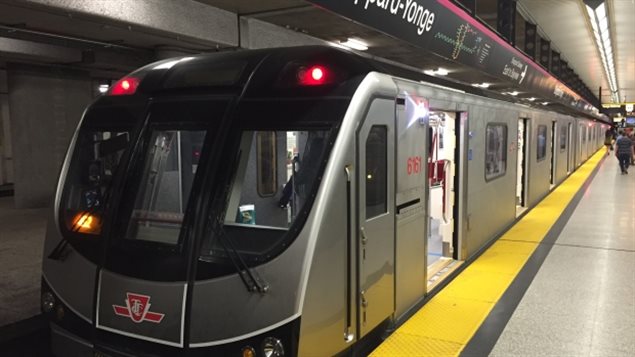 Toronto’s subway had the highest level of particulate matter in the air, consisting mostly of microscopic dust particles of iron and maganese from abrasion of the metal wheels and tracks. Since the study was done, Toronto has been initroducing new models of cars with better HVAC systems inside the wagons.
Photo Credit: Mike Wise- via CBC

The systems were tested in Vancouver on the west coast, and in Toronto and Montreal in central Canada.

The study was a collaboration with the federal agency Health Canada, McGill University in Montreal, and the University of Toronto.

The study conducted in 2010 and 2011 found the subway system in Toronto had particulate matter some ten times higher than outside.

Toronto subway levels were three times higher than Montreal’s while Vancouver’s “sky train” which travels outside in some areas, had the lowest levels.

These can easily get into the lungs and potentially cause damage.

The study found on average 100 micrograms of pollutant per cubic metre in Toronto,  University of  Toronto engineering professor Greg Evans says that is similar to particulate on a typical day in Beijing,

A lot of the microscopic particles were metallic, iron and manganese.   “We believe a lot of the particles that we detect in the air come in because of the abrasion of the wheels on the tracks”, said Evans.

Montreal’s system which uses rubber tires and a combination of electro-magnetic braking and wooden brake pads.  It registered  a particulate level of 36 micrograms per cubic metre, while Vancouver even though it has steel wheels and rails like Toronto, registered an average of 17 micrograms per cubic metre. This was due to the fact that 80 percent of the system is above ground and exposed to the air.

The study noted that with average commute times of an air, a sizeable portion of the population is exposed to the dust, contributing to 20 percent of a Toronto rider’s exposure, and 11 percent in Montreal and Toronto.

The Toronto Transit Commission says since the study they have taken measures to improve air quality including a giant vacuum cleaner that travels the rails sucking up some of the settled dust on the tracks and better HVAC systems on the new model of train. Montreal has also begun introducing a new model of train.

Evans says the study can be used  to make improvements in all systems going forward.

2 comments on “Toronto subway air quality: as bad as Beijing”