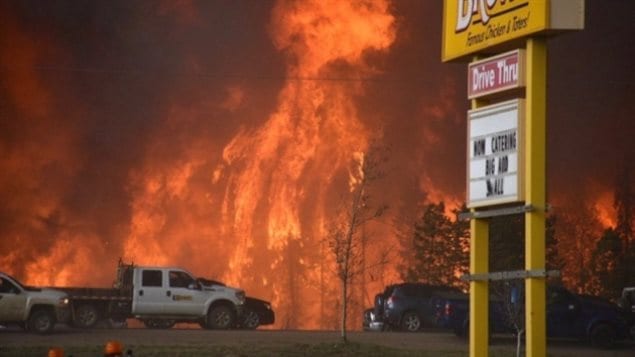 The devastating Fort McMurray fire of 2016 is an example of the kind of boreal forest fire that researchers say they would be able to predict.
Photo Credit: Terry Reith

Researchers at the University of British Columbia have come up with a new way to predict when and where fires caused by humans are most likely to occur in the spring. Between the time that the snow melts and plants sprout new greenery is the riskiest time for human-caused wildfires in northern boreal forests such as those found in the western provinces of Alberta and British Columbia.

It is also the most dangerous time of year in terms of property loss and damage to infrastructure. “For example, we found that conditions were just right in the spring of 2016 to allow the Fort McMurray fire to spread rapidly to the surrounding leafless vegetation,” said researcher Paul Pickell in a news release. That fire was the costliest natural disaster in Canadian history and forced 88,000 people to evacuate the area.

To develop the early warning system, researchers used satellite images of vegetation and tracked moisture in fuel sources like leaves. That allowed them to predict the risk of a human-caused wildfire with 10-day accuracy.

By using this system, Pickell said wildfire managers could have information for most forests before the start of the fire season and then determine where best to deploy their firefighting resources. There are fires every year in Canada’s boreal forests as part of the natural cycle. But keeping them away from property and infrastructure is a challenge.

Pickell says his warning system could be used in north America, Europe and Russia using open-access satellite observations of the earth. He and his colleagues’ findings were published in the journal Scientific Reports.