What’s up in the Arctic? News from the circumpolar countries brought to you by RCI’s Eye on the Arctic

Radio Canada International’s Eye on the Arctic seeks to bring together media from all circumpolar countries to better tell the stories of northern communities and people, the region’s politics, culture and environmental issues. Read recent reports from our own Eilis Quinn, Levon Sevunts, Jean-François Villeneuve, marc Montgomery and Lynn Desjardins.

Calling it a “model for promoting fraternity between nations,” a group of international academics has nominated the Arctic Council for the Nobel Peace Prize. “In a time when facts have been challenged, diversity has been viewed with suspicion, and the value of international cooperation has been questioned, the Arctic Council has persevered in its work unabated,” said the sixty signatories from over 20 different countries in their nomination letter submitted to the Norwegian Nobel Committee on Sunday… more

U.S. scientists have found new evidence of significant changes in the chemical and biological composition of the Arctic Ocean that could fundamentally transform the local food chain. A new study published in January in the journal Science Advances suggests that climate change has caused a dramatic increase in the amount of soils or sediments flowing from the Arctic shore and the shallow continental shelf into the ocean over the last decade… more

A billion-year-old fossilized algae found in sediment rock deposits in the Canadian Arctic is believed to be the oldest known direct ancestor of modern plants and animals, according to new a study by scientists at McGill University published in the journal Geology. The analysis of the fossil organism, identified as a red algae called Bangiomorpha pubescens, has also led the researchers to estimate that the basis for photosynthesis in today’s plants was set in place 1.25 billion years ago… more 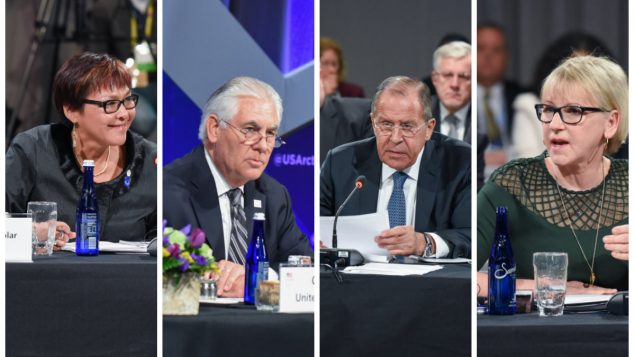 For our 2017 Arctic news roundup series, we checked in with some of our expert bloggers, for their take on this year’s Arctic news: what the media got right, what we got wrong and what might be important to keep our eye on in 2018. Today, in the last instalment of our series, we’re joined by Heather Exner-Pirot. She’s a managing editor at the Arctic Yearbook, a peer-reviewed publication devoted to the North, and her work appears regularly on Eye on the Arctic… more

The federal government announced Thursday the creation of seven new marine refuges to protect vital habitat off Canada’s Arctic and northern Atlantic coasts. The new marine refuges off the coasts of Nunavut and Newfoundland and Labrador will cover a 145,598-square-kilometre swath of ocean and will add 2.53 per cent to Canada’s marine protected areas, said Minister of Fisheries, Oceans and the Canadian Coast Guard Dominic LeBlanc… more 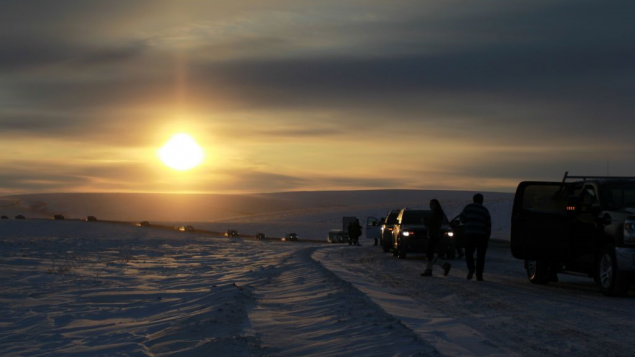 Cars on the Inuvik-Tuktoyaktuk Highway in Arctic Canada on November 15, 2017. (Melinda Trochu/AFP/Getty Images)

The end of the year is often a time to take stock, and here at Eye on the Arctic we’re no different. That’s why, as 2017 draws to a close, we’re checking in with our bloggers to get their take on all things Arctic; from science to society, from media to diplomacy. Up today is Mia Bennett, an Arctic expert who runs the Cryopolitics Arctic news and analysis blog,.. more 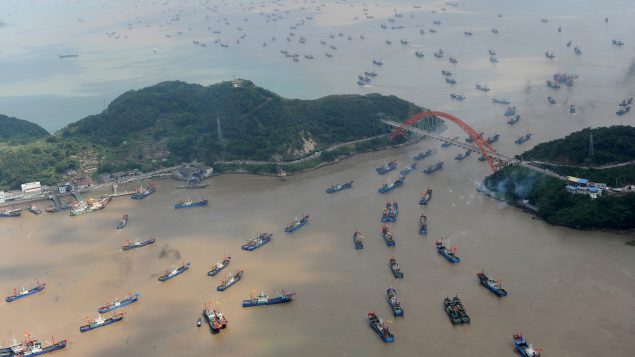 Fishing boats leave port in Ningbo, China in 2015. A 16-year ban on commercial fishing in the Central Arctic Ocean, agreed on by Canada, the United States, Russia, Norway, and Denmark, along with the European Union, Japan, Iceland, China and South Korea, was one of the most important stories of the year says Canadian Arctic expert Mathieu Landriault. (China Daily/Reuters)

The end of the year is a time to take stock. Here at Eye on the Arctic, it’s also the time when we check in with our bloggers who’ve spent 2017 following, and analyzing, Arctic news and events. In this instalment of Eye on the Arctic’s annual Year in Review, we talk to our contributors about what got their attention, what took them by surprise, and whether there’s anything we in the media might have messed up along the way… more

The latest Arctic Report Card – an annual scientific assessment of Arctic conditions by the U.S based National Oceanic and Atmospheric Administration (NOAA) paints a worrisome picture of the far north. The report begins with the ominous words, “Arctic shows no sign of returning to reliably frozen region of recent past decades”… more

Iceberg-spotting competition will land winner US$50,000

People from all over the world have joined a competition to find a better way to identify icebergs floating off the eastern coast of Canada. Currently, satellite images and radar show blobs on the ocean but they must be analysed to determine whether they are ships, marine mammals or icebergs. People are good at that, but machines are faster and the search is on for new and better computer technology… more

Officials from five Arctic countries and five major distant fishing powers reached an “unprecedented” agreement Thursday on a legally binding international accord that will protect nearly three million square kilometres of the Central Arctic Ocean from unregulated fishing. Once signed, the agreement will prevent commercial fishing in the high seas of the world’s smallest ocean for at least 16 years while scientific research is conducted to learn more about its marine life and resources… more