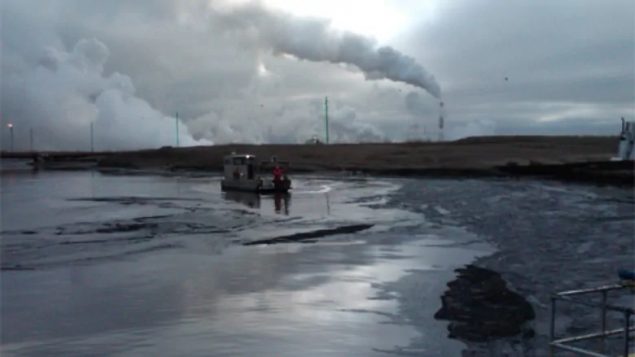 A recovery boat is seen in October 2010 on the Mildred Lake tailings pond in northern Alberta. ((James Hees/CBC News)

The Syncrude company operating in the western province of Alberta’s oilsands region, has been fined $2.7 million dollars for causing the deaths of 31 blue herons.

A large containment pond for a mixture of bitumen, water and other chemical byproducts of production, known as a runoff or sump pond, was at one time about a kilometre long, almost half a kilometre wide, and some 8 metres deep.  Occasionally drained, it had at the time been mostly drained and left abandoned when in 2015, an employee found 30 Great blue heron carcasses and one bird still alive at the site at Mildred lake which still contained some bitumen and runoff. The bird was later euthanized. 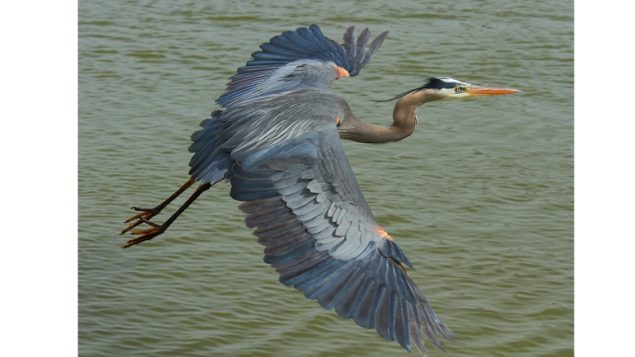 Some 31 Great Blue Herons died after being in contact with an abandoned and partially drained sump pond at a Syncrude facility near Fort McMurray in the Alberta oilsands region.
(Cal Calloway, Canadian Wildlife Federation-Hinterland Who’s Who)

The abandoned sump had not been included by the company in their required plans to install bird deterrents on tailings ponds. These include such things as strobe lights, scarecrows, noise makers and even radar-based movement detectors that fire noise cannons when birds approach.

The company has pleaded guilty to provincial and federal charges under the Migratory Birds Convention Act in depositing a substance harmful to birds and to charges under the Environmental Protection and Enhancement Act by failing to properly store a hazardous substance to ensure it does not come into contact with, or contaminate animals.

In pleading guilty to the charges the company said agreeing to the substantial fine reflected the company’s remorse.

It also noted that fencing and other deterrents have since been installed at the site and at another similar site to bring them into line with their waterfowl protection plan. 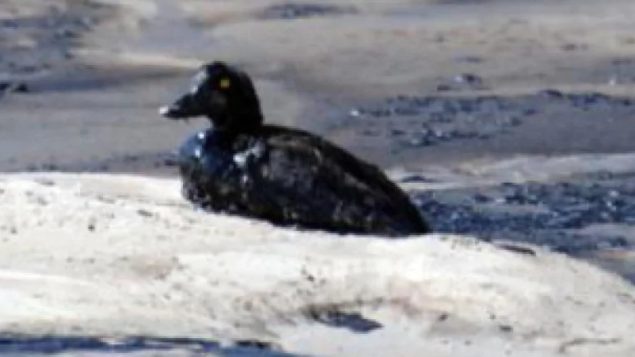 This duck and about 1,600 others landed on a Syncrude tailings pond on April 28, 2008. The company paid a $3 million fine for lack of preventative measures (Government of Alberta)

Almost one million dollars from the fine will go to projects in Alberta to support biodiversity, habitat reclamation, conservation, and safe migratory pathways for birds.

Most of the rest will go to the Environmental Damages Fund,  a federally administered fund to projects benefitting the natural environment.