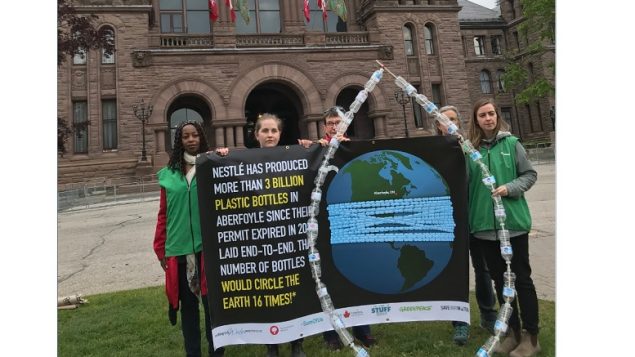 A small group of protesters gathered in Toronto in front of the provincial legislature this morning to bring attention to commercial water extraction and to plastic bottle waste. (Wellington Water Watchers-Council of Canadians)

A handful of activists arrived in front of the Ontario provincial legislature today seeking to highlight the ongoing issue of groundwater extraction by giant commercial water bottling operations . Using the figures from the multinational Nestle, they say the company extracted its 2-billionth litre of groundwater from the site at Aberfoyle in southern Ontario.

They say that Nestle has produced billions of 500ml plastic bottles of water since their permit expired in 2016, enough to circle the world 16 times if laid end-to-end.

Residents of the communities around the village in Wellington County west of Toronto, have long raised concerns about water extraction from the aquifer in the region. 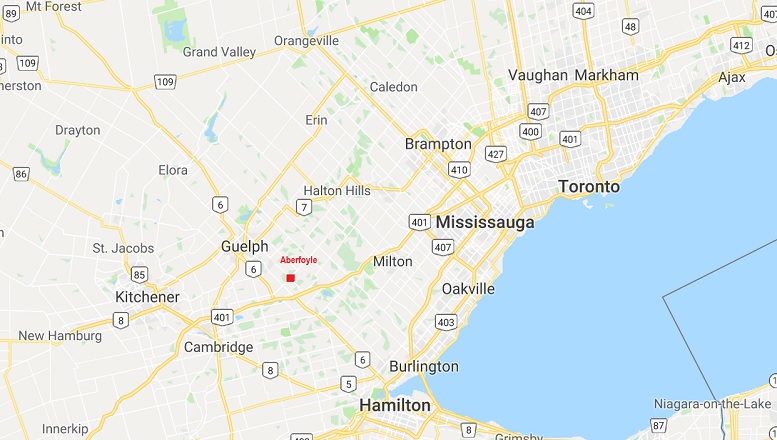 One of the Nestle’s water extraction plants is at Aberfoyle/Puslinch (Red dot) in Wellington County, Ontario (Google)

The towns and farms in the area are concerned about the high rate of extraction by Nestle and its potential to affect water levels, availability and quality, especially as the region grows and demands for water increase.

A local group called the Wellington Water Watchers in conjunction with the national advocacy group, the Council of Canadians have been leading the concerns over water extractions in the county and nationally.  In addition to the huge water extraction, there is also concern about the vast numbers of plastic waste involved with bottled water sales.

“Droughts, climate change and over-extraction are depleting our precious groundwater sources.” says Mark Calzavara, the Ontario Organizer of the Council of Canadians. “Bottled water is a frivolous waste of water and the impact of all that plastic is being felt around the world. This has to stop.”

In addition to the plastic waste, the Wellington group says the bottled water is shipped out of the region, sometimes thousands of kilometres away and so can never return to the aquifer.

A moratorium on extraction licences is still in place in the province although companies can continue water extraction at the rates allowed under their old permits until new decisions are made.