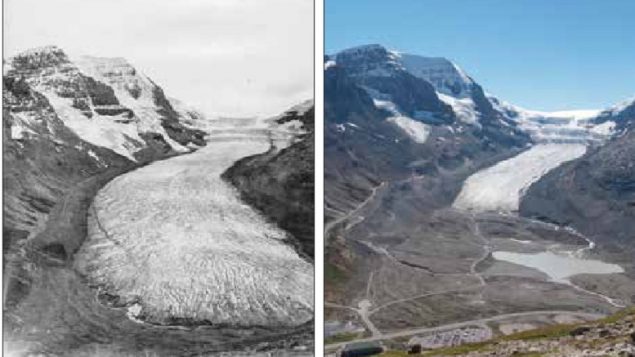 The Athabaska glacier, Alberta shown in 1917, and again from the same viewpoint in 2011. It has lost 50% of its volume and receeded 1.5km in just the last 12.5 years, Photo: A.O. Wheeler, Interprovincial Boundary Survey. Modern image: 2011, Mountain Legacy Project

See the glaciers before they’re gone, watch the whales or gorillas, or elephants before they are no more, see the Great Barrier Reef before it dies off, visit the Amazon before development eliminates the jungle; This type of thing is called quietly “last chance tourism”, or “doom tourism” but seldom by the places of interest who don’t really want to promote themselves as such.

Glaciers in Canada’s national parks in the Rocky mountains are quickly disappearing and a professor co-authored  a study last year of visitors to a parks glacier to find out if they were there to see the effects of climate change on the glacier, and how it might be used to educate regarding climate change

Elizabeth Halpenny (PhD) is an associate professor in the faculty of Kinesiology, Sport and Recreation.

The study was labelled “The End of the Ice Age?” Disappearing World Heritage and the Climate Change Communication Imperitive. It was published in the journal Environmental Communication. (abstract here)

While many places don’t actively promote themselves as “last chance” tourism, there is an underground feeling spread that many such venues are relatively speaking, just that. 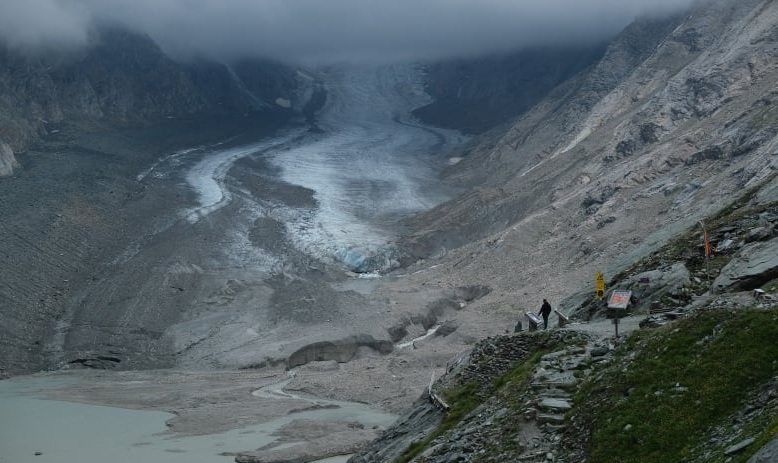 A visitor stands at a spot that in 1963 was under the ice of the Pasterze glacier as the glacier in its current state is seen behind on Aug. 13 near Heiligenblut am Grossglockner, Austria. The Pasterze, Austria’s largest glacier, has lost over half its volume since 1850, and its tongue, shrinking in both width and depth, has retreated at least 2.6 kilometres. (Sean Gallup/Getty Images)

The IPCC recently released report on high altitudes and oceans showing how they are being seriously compromised by climate change.

Professor Halpenny says however it can be used as an important tool to educate about the effects climate change is having on ecosystems which have a knock-on effect on many, if not all, aspects of life, if not immediately then in the relatively near future.

As an example, of the 399 glacier visitors questioned, sixty per cent said they wanted to see the glacier before it disappeared and forty-five per cent wanted to see for themselves how climate has affected the glacier.

While some have criticised “last chance tourism” as worsening a problem on a specific environment or ecosystem, Halpenny says staying away is not realistic nor helps with the message.

In a University of Alberta news article she said, ““This is an incredible opportunity to talk about climate change and how we’re losing our glaciers in the mountain parks. Visitors can be more aware of this decline and related climate change impacts, understand the science that we can use to mitigate negative impacts and then take action.”