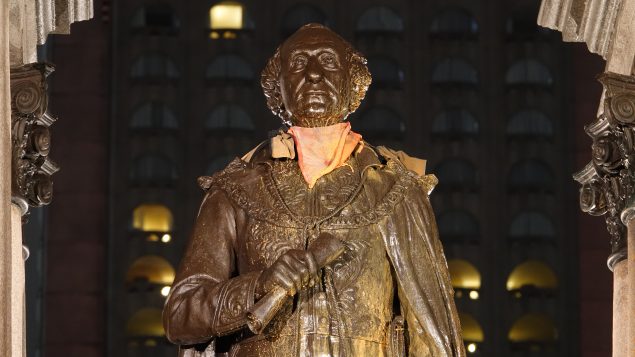 The statue of John A. Macdonald in Montreal was once again vandalized during the night of October 30 to 31, 2019. (RADIO-CANADA / SIMON-MARC CHARRON)

Montreal monument dedicated to John A. Macdonald vandalized once again

On the eve of Halloween, a Montreal statue dedicated to Sir John A Macdonald was once again covered with paint by a group of so-called “anti-colonial zombies”.

The statue, located on Place du Canada in downtown Montreal, was covered with orange paint by a group which called itself the “Anti-colonial zombies of the Old Saint-Antione Cemetery, buried under Dorchester Square and Place du Canada”

The group wants the monument dedicated to John A. Macdonald, one of the founding fathers of Canadian Confederation whom it considers racist, to be unbolted.

The John A. Macdonald government implemented the Indian residential school system, where many abuses were committed against Indigenous people, and adopted the Indian Act.

It’s not the first time the statue is vandalized.

On October 21, a group already vandalized the statue of Sir John A. Macdonald as well as others. 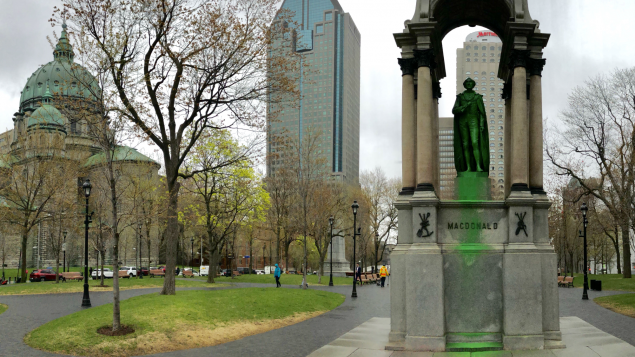 An anti-colonialist group had already vandalized the statue of John A. Macdonald by covering it with green paint on May 17, 2019. (Conrad Fournier/Radio-Canada)

Back in 2018, two Montreal statues representing Queen Victoria were also sprayed in green paint by an obscure group calling itself the Delhi-Dublin Anti-Colonial Solidarity Brigade.

That same year, the Canadian Historical Association chose to remove the name of Canada’s founder and first Prime Minister, Sir John A Macdonald, from one of its awards, a decision that did not please everyone.

According to Glen Williams (PhD), author and professor emeritus of political Science, both Macdonald and his legacy are much more complex than many would like to believe, or would care to take the time to explore.

Despite all these acts of vandalism, the City of Montreal has no intention of removing the statue.